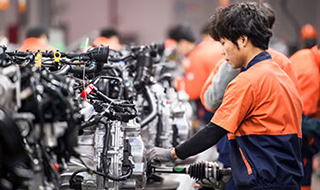 Styrene is a colorless, flammable liquid, which has a sweet odor and is highly volatile. Styrene is widely used to make plastics and rubber, which are used to manufacture a variety of products, such as insulation, pipes, automobile parts, printing cartridges, food containers, and carpet backing.

How are people exposed to styrene?

People may be exposed to styrene through breathing indoor air that has styrene vapors from building materials, photocopiers, tobacco smoke, and other products.

Smokers are exposed to styrene because it occurs in cigarette smoke.

Living near industrial facilities or hazardous waste sites is another way people may be exposed to styrene.

Styrene may also leach from polystyrene containers used for food products, but levels of styrene in food are very low. Although the National Toxicology Program listed styrene as a reasonably anticipated carcinogen in 2011, the styrene listing was based on studies of workers exposed to high levels of styrene.

Health Effects: Can exposure to styrene cause cancer?

A report by the National Academy of Sciences in 2014 endorsed this NTP listing of styrene as a reasonably anticipated human carcinogen.

What evidence is there that styrene causes cancer?

The NTP Report on Carcinogens based its listing of formaldehyde as a known human carcinogen using the following evidence:

Human Studies: The limited evidence for cancer from styrene in humans is from occupational studies showing increased risks for lymphohematopoietic cancers, such as leukemia and lymphoma, and genetic damage in the white blood cells, or lymphocytes, of workers exposed to styrene. There is also some evidence for increased risk of cancer in the pancreas or esophagus among some styrene workers, but the evidence is weaker than that for lymphohematopoietic cancers.

Mechanistic Studies: Exactly how styrene causes cancer is not fully understood, but styrene is converted, in laboratory animals and humans, to styrene–7,8–oxide, which is listed in the Report on Carcinogens as reasonably anticipated to be a human carcinogen. Styrene-7,8-oxide causes genetic damage and has been found in the blood of workers exposed to styrene.

In addition to NTP’s work in this area, some NIEHS grantees are also working to understand how occupational exposures to mixtures of chemicals like styrene and butadiene contribute to the development of some cancers.

What are some things I can do to prevent exposure to styrene?

Workers and employers should practice good occupational health behaviors. This may include wearing protective clothing, respirators, and gloves. Work places should be well ventilated.