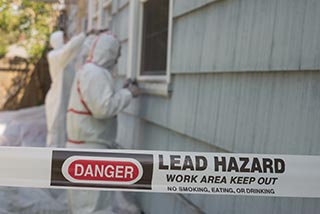 Lead, a naturally occurring metal, is abundantly found throughout the Earth. It has been used in a wide variety of products including gasoline, paint, plumbing pipes, ceramics, solders, batteries, and even cosmetics.

Lead is hazardous to our health. Due to health concerns, in 1973, the federal government began to phase out lead in gasoline and eliminated it by 1996. The United States government banned manufacture of lead-based house paint in 1978. In 1986, the government restricted the lead content of solders, faucets, pipes, and similar materials.

Despite progress in reducing lead exposure in U.S. communities, elevated blood lead levels remain an issue for children, particularly those living in poorer areas. Disparities in who is harmed by lead contamination persist.

Lead exposure remains a significant public health concern because of persistent lead hazards in the environment.

Lead poisoning is a serious problem affecting children globally, according to a study published by the United Nations Children’s Fund (UNICEF) in 2020. The study is the first to describe the magnitude of global lead poisoning. Up to 800 million children have blood lead levels at or above 5 micrograms per µg/dL. Nearly half of these children live in South Asia.

Researchers estimate that half of the U.S. population, more than 170 million people, were exposed to harmful lead levels in early childhood. "The scope of such widespread exposure, particularly from the late 1950s to the early 1980s, suggests the legacy of lead continues to shape the health and wellbeing of the country in ways we do not yet fully understand," according to the researchers. Lead exposure is associated with IQ loss, for which even small deficits can have a meaningful adverse effect on people’s lives and on society.

What are primary sources of lead today?

Old paint dust. Despite the ban, lead-based paint is still found in older homes and buildings. This paint may chip, then turn into dust. Lead dust is the most common way that people are exposed to lead in the United States.

Contaminated soil. Old lead-based paint flaking off the outside of buildings can mix with soil. Before elimination of lead in gasoline, lead from car exhaust mixed with soil near roads, and it is still there. Also, lead in fumes from metal smelting, battery manufacturing, and some factories became airborne and then mixed with soil. Soils in older areas of some cities remain contaminated by lead due to these lead sources. This lead, when part of soil dust, can also contaminate air.

Contaminated drinking water. Water from lakes, rivers, or wells is not a common source of lead. Lead contamination in drinking water usually comes from distribution or plumbing lines that leach lead. The only way to know if lead is in drinking water is to have the water tested.

How much lead is harmful?

No blood lead level is safe.

How does lead get into the body, and how is it measured?

Lead can get into your body by consuming contaminated water or food, or from breathing fumes or dust that contain lead.

Children under the age of 6 years old are at an increased risk for lead exposure, due to their rapid rate of growth and their tendency to place toys and other objects in their mouths that could contain lead or leaded dust.

Lead levels in your body are measured through simple blood samples, and the unit of measurement is micrograms per deciliter (µg/dL).

What is a Blood Lead Reference Value?

The Centers for Disease Control and Prevention (CDC) has been involved in defining criteria for interpreting blood lead levels in children for more than 40 years. In 2012, CDC introduced the blood lead reference value (BLRV) to identify children with higher levels of lead in their blood compared to most other children. Data for developing the BLRV comes from the National Health and Nutrition Examination Survey (NHANES).

Updating the reference value allows CDC, other federal agencies, and health departments to focus on children with highest exposures. Children with a blood lead level between 3.5 and 5 µg/dL, and higher, are prioritized for lead exposure reduction actions.

What are the effects of lead in children?

Exposure to lead can have a wide range of effects on a child's development and behavior. Many effects are permanent.

Blood lead levels at or less than 10 µg/dL are associated with increases in behavioral effects, delays in puberty, and decreases in hearing, cognitive performance, and postnatal growth or height.

Health effects are found at blood lead levels of less than 5 µg/dL. Such effects may include diminished IQ scores and academic achievement, and increased behavioral problems and attention-related behaviors.

How are adults exposed to lead, and what are the health effects?

Most adults with elevated blood lead levels are exposed to lead at work. A greater chance for lead exposure is found in people who work in occupations related to mining, ironwork or welding, construction including building renovation and remodeling, smelters, shooting ranges, manufacture and disposal of car batteries, automobile radiator repair, and manufacture of pottery or stained glass.

Lead exposure is linked to many health effects in adults.

Blood lead levels greater than 15 µg/dl are associated with cardiovascular effects, nerve disorders, decreased kidney function, and fertility problems, including delayed conception and adverse effects on sperm and semen, such as lower sperm counts and motility.

Blood lead levels below 10 µg/dl are associated with decreased kidney function and increases in blood pressure, hypertension, and incidence of essential tremor, a degenerative disorder of the central nervous system whose most recognizable feature is a tremor of the arms or hands during voluntary movements, such as eating and writing.

There is also evidence showing that adults who have blood lead levels even less than 5 µg/dl may have decreased kidney function.

Because the health effects of lead are different for everyone, more research needs to be done to fully understand them.

What can I do to prevent lead exposure?

Lead poisoning is preventable. Eliminating all lead exposure is our best course of action.

Exposure to lead is a focus of NIEHS’ children’s environmental health research and research-support activities.

Lead and Your Health