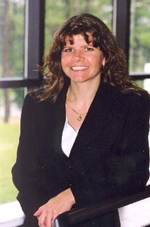 Elisabeth Harrahy, Ph.D., then a doctoral student in the Department of Fish and Wildlife Biology at the Colorado State University, Fort Collins, Colorado, received the Karen Wetterhahn Memorial Award in 1999. Harrahy was also honored in May 2000 at the Sixth International Symposium on Metal Ions in Biology and Medicine (San Juan, Puerto Rico) for her outstanding contributions as a young scientist in the field of metals research. Harrahy has an outstanding academic and scholastic record, demonstrated by the numerous awards she has received from college, university, and national programs, including the Society of Environmental Toxicology and Chemistry Pre-Doctoral Fellowship.

Harrahy is currently an Associate Professor in the Department of Biological Sciences at the University of Wisconsin-Whitewater.

Harrahy's research advisor, William Clements, Ph.D., predicts that her research on the development and application of molecular genetic approaches for assessing the effects of heavy metals at Superfund sites will make a significant contribution to the field of environmental toxicology. Clements describes Harrahy as an accomplished researcher, an exceptional teacher, and an outstanding role model for female undergraduate students working in his laboratory.

Harrahy received her B.S. degree in the double majors of Natural Resource Studies and Environmental Science, with a minor in Zoology, from the University of Massachusetts. She earned her M.S. in Aquatic Ecology at West Virginia University. During her Master's thesis research, "Effects of Diflubenzuron on Aquatic Macroinvertebrates," Harrahy investigated the toxicity and persistence of the gypsy moth pesticide diflubenzuron (Dimilin®) in stream ecosystems.

"The Superfund Basic Research Program I was involved with at Colorado State University provided me with substantial training in several different areas: aquatic ecology, environmental toxicology, molecular biology, and quantitative chemical analysis. This experience was beneficial to my career as an environmental toxicologist because the field of environmental toxicology is so highly interdisciplinary. I believe that my experience with the SBRP opened doors for my in terms of job positions and grants, which in turn helped me obtain my ultimate goal, a position in academics."

Harrahy's doctoral research, "Influence of Previous Exposure to a Mixture of Heavy Metals on Tolerance and Genetic Diversity in Baetis tricaudatus (Ephemeroptera: Baetidae): A Comparison of Populations," applies an interdisciplinary approach to provide insight into both differential susceptibility to a mixture of heavy metals, and the underlying genetic differences between previously exposed and naive populations. The results of Harrahy's research provide valuable insight into the mechanisms of heavy metal toxicity and may be applicable to other Superfund sites contaminated with a complex mixture of contaminants at which heavy metals are a concern.

Harrahy describes Wetterhahn as "not only an excellent scientist who made significant contributions to the state of knowledge in her field, but also a person who was committed to advancing the role of women in science." Harrahy thanks her co-authors and NIEHS, commenting that "receipt of this award allowed me to meet people who I would not otherwise have had a chance to meet, and to discuss their latest research findings with them. In addition, I was given the opportunity to meet with NIEHS staff to discuss grants management and the funding process, a great learning experience."

Following graduation in 2000, Harrahy completed a post-doctoral project funded by the U.S. Fish and Wildlife Service. Her research involved assessing the reliability of 30 years of toxicity data collected by the U.S. Department of Agriculture on the effects of the avicide DRC-1339 on non-target bird species. She also taught as an adjunct lecturer in the Environmental Science Department at Carroll College in Waukesha, Wisconsin before accepting a position as an environmental toxicologist with the Wisconsin Department of Natural Resources (DNR) in Madison. She worked for the DNR for six years, serving as the principal investigator on a research project funded by the U.S. Environmental Protection Agency Great Lakes National Program Office, which was designed to examine the sources, toxicity and estrogenic activity of polybrominated diphenyl ether flame retardants, and as coordinator of a statewide blue-green algae monitoring program.

Currently, Harrahy is an assistant professor in the Department of Biological Sciences at the University of Wisconsin - Whitewater. Her research interests include blue-green algal toxins, and the effects of pesticides and pharmaceuticals on aquatic organisms. She lives with her husband and three daughters in Oconomowoc, Wisconsin where she spends her "spare" time renovating their 105-year old house and writing poetry and short stories.