Evaluation of the Algorithms Implemented in TAGster

We implemented 3 algorithms for tag SNP selection in TAGster. These algorithms are:

2.2 HapMap ENCODE
HapMap ENCODE (Encyclopedia of DNA Elements) Project resequenced ten 500 kb genomic regions in 48 individuals and subsequently genotyped all discovered SNPs as well as all SNPs in dbSNP at the time in 270 HapMap DNA samples from 3 populations including 30 CEPH (Utah residents with ancestry from northern and western Europe) trios, 90 Asians (45 unrelated JPT (Japanese in Tokyo, Japan), 45 unrelated CHB (Han Chinese in Beijing, China) and 30 YRI (Yoruba from Ibadan, Nigeria) trios. There were a total of 11,700 SNPs with minor allele frequency (MAF) ≥ 0.05 in at least one of the 3 populations.

Table 3 shows that the exhaustive search algorithm in TAGster greatly improved the computational efficiency in all 4 populations. Moreover, FESTA did not find an optimal solution for the number of tag SNPs for 1 gene in Africans and 1 gene in Europeans. FESTA exceeded the 1,000,000 step limit and defaulted to use of the greedy algorithm 20 times in order to provide a result while TAGster only used greedy algorithm 4 times (Table 4). Evaluation of HapMap ENCODE data to generate table 5 showed a similar pattern of computational efficiency and requirements for defaulting to the greedy algorithm. 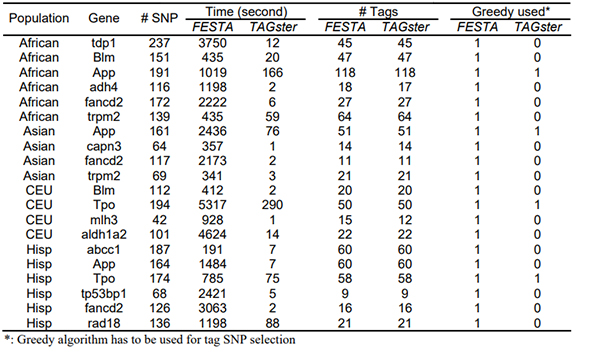 Table 4. Gene list in EGP that greedy algorithm has to be used for selection of tag SNPs

We applied the modified greedy algorithm (Algorithm 1) and 2-stage method (Algorithm 3) to select multi-population tag SNP in 207 genes for the 4 populations from EGP Panel 2 and used as a benchmark measure the number of tag SNPs found using ldSelect followed by MultiPop-TagSelect (Howie, et al., 2006). The generalized modified greedy algorithm (generalized algorithm 1 for multiple populations) reduced tag SNP requirements by 183 SNPs whereas the two-stage method (Algorithm 3) reduced tag SNP requirements by 159 SNPs. If for each gene we selected the minimum of these two methods, it reduced tag SNP requirements by 233 SNPs below that required by ldSelect followed by MultiPop-TagSelect (Table 4). Evaluation in 3 populations from HapMap ENCODE shows a similar pattern of reduction (Table 6)

In order to further reduce the number of tag SNPs, investigators may choose to select tag SNPs only for bins that contain multiple SNPs. The minimum bin size can be specify using the parameter -minimum in the parameter file params.txt. For example setting -minimum: 2 requires that bins contain at least two SNPs and eliminates singleton bin tag SNPs. Elimination of singleton bin tag SNPs can dramatically cut down the number of tag SNPs, while still capturing the majority of SNPs. It is particularly useful when selecting multiple population tag SNPs. For example, if parameter –minimum is set to a value of 2, TAGster selected 4094 multiple population multiple SNP bin (MPMS) tag SNPs for the 4 populations in EGP, compared to 7429 SNPs required if singleton bins are tagged. This smaller number of tag SNPs still captures ~95% common SNPs in Asian and CEPH populations, 91% in Hispanic population and 84% in Africans. For HapMap ENCODE data, 2095 MPMS tag SNPs (out of total of 3882 tag SNPs if singleton bin tags are included) can capture ~96% of common SNPs in Asian and CEU and 86% of SNPs in YRI.