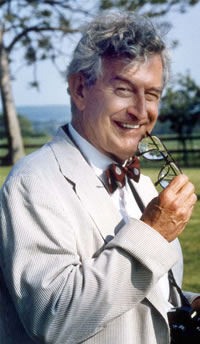 David P. Rall, M.D., Ph.D., (1926-1999) was director of NIEHS from 1971 until his retirement in 1990. He served as director of the National Toxicology Program (NTP) from its inception in 1978 through 1990. As a scientist, administrator, and diplomat, Rall pioneered the effort to identify and understand the elements that make up the human environment and their consequences for human health. As an intellectual and aggressive activist, he educated scientists, governments, and the world community to the critical need to address the existence of environmental agents and their consequences for human health. As a leader he marshalled some of the best minds and hearts of his time to the cause of world health through a safe and clean environment. And as a visionary he provided the goals of environmental health science and the direction to guide both current and future generations.

A native of Naperville, Illinois, Rall received his undergraduate degree from that city's North Central College in 1946. He received a Ph.D. in pharmacology and an M.D. from Northwestern University in Evanston, Illinois. He began his research career as a scientist at the National Cancer Institute (NCI), where he served in a variety of research and administrative positions until 1971. Rall also served as a surgeon (1955–1959), senior surgeon (1959–1969), medical director (1963–1971) and assistant surgeon general (1971–1990) in the United States Public Health Service (PHS). Rall authored over 100 publications in the areas of comparative pharmacology, cancer chemotherapy, the blood-brain barrier, pesticide toxicology, and drug research and regulation.

In 1961 the PHS Committee on Environmental Health Problems recommended the establishment of a national center to undertake integrated research and other activities related to environmental health. This center became the forerunner of NEHS. In March of 1971, Rall left the thriving, established world of research and clinical treatment at the National Institutes of Health's (NIH) main campus in Bethesda armed with a desire to reach beyond the treatment of chronic disease to seek its underlying causes and, through research, to learn how to prevent such diseases caused by environmental agents. Rall arrived in the newly established Research Triangle Park in North Carolina, where he set about the work of conceptualizing and then actualizing a state-of- the-art research facility among the pine forest and pastureland of the area, a prescient move that would situate the Institute at the epicenter of what would become an internationally renowned research commons.

The NIEHS was entrusted with the principal responsibility among federal agencies for the support of research and the training of scientists concerned with the effects of chemical, physical, and biological factors on human health. A vigorous intramural research program evolved at the Institute to study the biological effects of environmental agents. In the early 1970s, NIEHS scientists conducted some of the important early studies of aromatic hydrocarbons such as polychlorinated biphenyls, dibenzodioxins, and dibenzofurans, among others. Major studies on heavy metals in the environment were soon conducted, as were studies of specific target organs and how they were affected by environmental contaminants. Rall developed the NIEHS Extramural Program to administer an expanding portfolio of PHS grants and awards in environmental health science to researchers at colleges and universities throughout the United States. The establishment of the NIEHS Environmental Health Science Centers has promoted a multidisciplinary approach to the complicated problems of environmental health science and provides a mechanism for focusing academic resources on the search for solutions. In April 1972, Rall began Environmental Health Perspectives as an experimental journal to provide a forum for the exploration of the perspective of basic research on environmental health.

In 1978, NEHS was designated as the focal point for the establishment of the NTP, a cooperative effort to coordinate toxicological testing programs within the Department of Health and Human Services, and Rall was appointed its director. The major objectives of the NTP are to increase the depth of knowledge about the toxicology of chemicals, to evaluate the full range of toxic effects of chemicals, to develop and validate more effective assays for toxicity, and to disseminate toxicological information resulting from its studies.

Through the various activities of his career, Rall emerged as an international leader and representative of U.S. science worldwide. Rall served as the U.S. coordinator of cooperative environmental health programs between the United States and the U.S.S.R., the United Kingdom, Egypt, Japan, the People's Republic of China, Taiwan, Italy, Finland, and Spain. As a result of his work in attempting to strengthen international scientific cooperation, in 1975 NEHS was designated by the World Health Organization (WHO) as a Collaborating Center for Environmental Health Effects. In 1980, Rall played a leading role in an effort to establish the WHO's International Programme on Chemical Safety (IPCS), the goal of which is to provide an internationally evaluated scientific basis for the assessment of the risks to human health and the environment of chemicals.

Rall received many recognitions for his lifetime commitment to public service and scientific research including the PHS's Distinguished Service Medal, which he received in 1975 and again in 1990 for sustained leadership in the development of the field of environmental health science. In 1979 he was accepted as a Member of the National Academy of Sciences' Institute of Medicine (IOM), whose membership consists of the preeminent physicians of the United States. In 1988 the WHO presented Rall with the Health for All 2000 Medal. He was recognized in 1989 by the Institute of Occupational Health in Helsinki, which awarded to him its Distinguished Service Medal. Rall was also honored in 1989 by the Collegium Ramazzini, an international academic society that examines critical issues in occupational and environmental medicine with the goal of preventing disease and promoting health around the world.

In 1990, Rall retired from NEHS but remained extremely active in the environmental health arena. He chaired the IPCS and held a variety of other positions including foreign secretary of the IOM, board member of the Environmental Defense Fund, chairman of the Scientific Advisory Council of the Hawaii Heptachlor Research and Education Foundation, and member of the Board of Scientific Counselors of the National Institute for Occupational Safety and Health. The American Public Health Association established a permanent honor in recognition of Dr. Rall’s life and work: the David P. Rall Award for Advocacy. The David P. Rall Building, the main edifice on NEHS’s Research Triangle Park campus, was dedicated to his memory in 2000.