Gigiigooinaan (Our Fish): A New Advisory to Promote Anishinaabe Health and Wellness 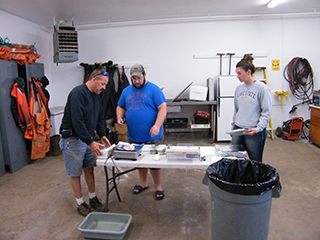 This project seeks to transform fish consumption advice for Native American tribal communities living in and around the Great Lakes. These communities are collectively known and referred to as the Anishinaabe. Ongoing concern about the presence of pollutants in the Great lakes that accumulate in fish, called persistent bioaccumulative toxics (PBTs), has led to numerous fish consumption advisories. Fish are an important part of the Anishinaabe diet and culture. There is a need to promote environmental health in these tribal communities and communicate the benefits of fish, but not increasing the risks of PBT exposure. Investigators will update and test the effectiveness of an interactive, culturally-tailored mobile application, called Gigiigooinaan (which means Our Fish), which was developed with community input as part of a previously funded NIEHS grant. The mobile app delivers personalized consumption advice on species of fish commonly consumed by the tribal communities and addresses key concerns related to environmental health and education for the Anishinaabe.

This project builds upon an existing 13-year collaborative partnership with two Anishinaabe inter-tribal consortia and their communities and provides a great opportunity to evaluate the effectiveness of the mobile app on dietary choices.

Specific aims of the project are to: