Community members living near the Grand Lake O’ The Cherokees (Grand Lake) were concerned about mercury exposure from contaminated fish, so community activists at Local Environmental Action Demanded Agency, Inc. partnered with researchers at the Harvard T.H. Chan School of Public Health and the University of Oklahoma Health Sciences Center to measure their mercury exposure. 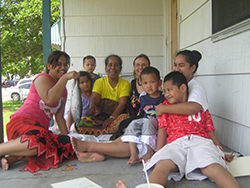 L.E.A.D. Agency Executive Director Rebecca Jim (back row, right) visits with members of an extended family from the local Micronesian community. The girl on the left holds a fish that was purchased from the market.
(Photo courtesy of Grand Lake Watershed Mercury Study)

The Grand Lake watershed in northeastern Oklahoma is located near several potential sources of mercury pollution, including six coal-fired power plants operating within a 60-mile radius. This project grew out of community concerns about mercury exposure among those who rely on locally-caught fish for food.

Researchers from Harvard partnered with community activists at Local Environmental Action Demanded (L.E.A.D.) Agency, Inc. and researchers at the University of Oklahoma Health Sciences Center (OU) to examine the relationship between fish consumption and mercury exposure in residents who regularly eat fish from the Grand Lake watershed.

The Grand Lake Watershed partnership developed as a result of previous collaborations that initially focused on heavy metal contamination at the Tar Creek Superfund site, and later expanded to include other environmental issues.

For this study, L.E.A.D. Agency’s previous work in the Grand Lake area and its existing relationships with local residents and community groups helped to identify individuals who frequently fished in the Grand Lake watershed and were willing to serve as community advisers. The study team held regular meetings with a community advisory board and a council of fishing experts to gather input on a number of items central to study design and implementation. This included recruitment strategies, study documentation, and information dissemination. The team also met with community organizations – including Native American Tribes United to Restore the Environment (NATURE), comprising environmental specialists from the 10 Native American tribes in the local area – and organized focus groups to ensure that outreach strategies and materials were appropriate for the local community. 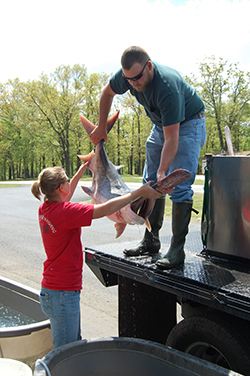 An angler brings a paddlefish to the Oklahoma Department of Wildlife Conservation’s Paddlefish Research Center (PRC) for processing. The PRC is located at the most upstream part of Grand Lake.
(Photo courtesy of Robert Lynch, University of Oklahoma Health Sciences Center)

More than 150 Grand Lake-area residents were recruited for the study through personal contacts as well as attendance at local fishing events, health fairs, and other cultural events. Participants provided hair samples at five different times over the course of a year, which were then analyzed for mercury. Each time a participant provided a hair sample, they were also asked to complete a food frequency questionnaire (FFQ), and were given a log to track their fish consumption between visits to help them fill out subsequent FFQs.

Each study participant received a report of their hair sample results, general information about mercury and health, a fact sheet and a FAQ booklet containing a summary of the study’s main findings, and a video on mercury exposure and fish consumption. Study team members also held a series of community meetings to discuss the results, and continue to raise awareness of the study and its environmental health implications through discussions and information dissemination at local- and state-level events.

Promoted safe subsistence fishing practices. Many of the local fish species tested had relatively low levels of mercury, but a few species did contain mercury concentrations of concern. Study outreach materials included information on mercury levels in locally-caught fish, the type and size of fish found to have higher levels of mercury, and fishing locations where fish with the highest mercury levels were caught. This information helped to educate study participants and Grand Lake-area residents on ways to reduce their mercury intake.

Produced valuable data that was used to inform decision-makers and encourage action. The project provided community members with information that was used to inform state environmental authorities and promote a reduction in mercury emissions. Study team members shared project data and a copy of their findings with the Oklahoma Department of Environmental Quality, and the agency has indicated it will use this information to develop a combined mercury/lead fish consumption advisory for area residents.

Influenced fish consumption patterns. Study results suggest that some participants may have changed their fish consumption patterns due to their participation in the study. Several participants found to have high mercury concentrations in their hair at the beginning of the study generally showed reduced levels at later visits. Some of these individuals contacted study team members to discuss their results and get more information on ways to reduce their mercury exposure.

Provided a baseline for future risk evaluation. Information on fish consumption patterns among those who fish in the Grand Lake watershed could be used to evaluate risks associated with other contaminants in the lake. The study findings also underscore the need to understand fish consumption patterns among fishermen and their families who rely on other Oklahoma lakes that have higher levels of mercury contamination.

Data collection and participant retention. The study aimed to measure fish consumption rates and hair mercury levels over time, requiring an individual’s participation at various points throughout the course of a year. Study team members organized events at local venues to facilitate data collection, but they often had to arrange to meet participants individually to ensure their participation throughout the study. Individual meetings were challenging due to the large number of participants and difficulties in contacting some participants to schedule follow-up visits. 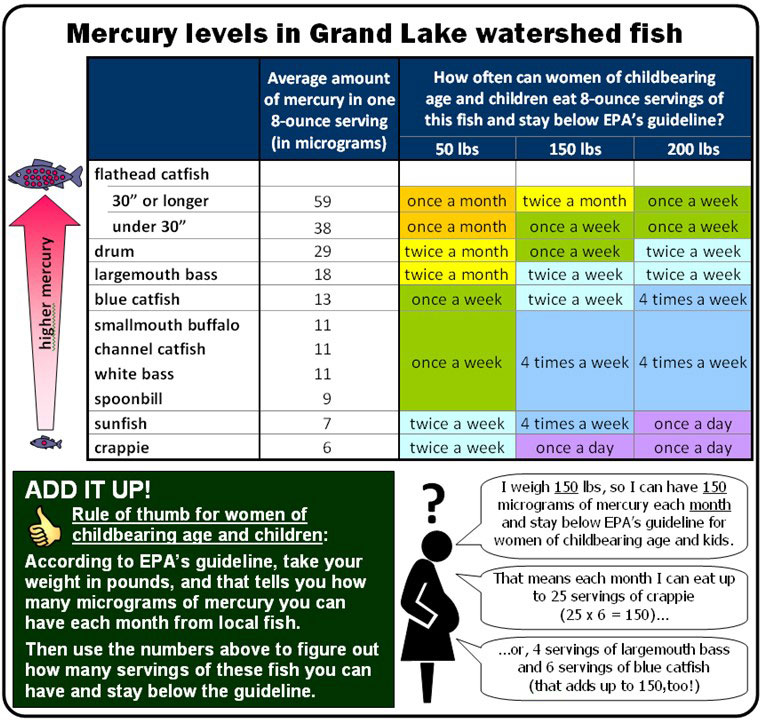 The study team created this table to help participants and other community members determine how much fish they could eat each month and stay below EPA’s guideline for mercury intake.

Communicating risk. The study team needed to find a way to promote the benefits of eating local fish, while communicating the risk of mercury exposure associated with specific species. They also needed to provide fish consumption guidelines that were accurate and easy to understand.

With input from the community advisory board and focus groups, the study team created a table that allowed participants to easily determine how many servings of various species of fish they could eat each month and stay below the U.S. Environmental Protection Agency (EPA) guideline for mercury intake. This table was paired with a series of questions and answers addressing community concerns about mercury exposure, fish consumption guidelines, and the study’s key findings.

Fish collection and analysis. The number of samples of each fish species collected from different parts of the Grand Lake watershed was somewhat dependent on the types of fish donated by residents and the state wildlife department. This limited researchers’ ability to look for differences in mercury levels in certain fish species in different parts of the watershed since they had more fish samples from some parts of the watershed and few or no fish samples from others. More systematic fish collection efforts would provide a more representative sampling of the lake as a whole.