Today, Kozul-Horvath is Executive Director at the Novartis Institute for Biomedical Research. 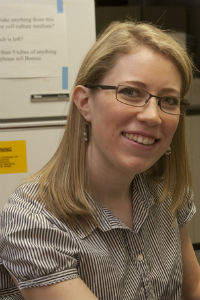 Courtney Horvath, Ph.D. is the thirteenth recipient of the annual Karen Wetterhahn Memorial Award. The award was presented on November 12th, 2010, at the Superfund Research Program (SRP) Annual Meeting hosted by Oregon State University in Portland, Oregon. The SRP acknowledged Horvath for her contributions to research on effects of low dose arsenic exposure on the immune system.

Horvath is a postdoctoral fellow in Dr. Richard Enelow's lab in the Department of Pharmacology/Toxicology at Dartmouth College in New Hampshire. She earned her BA from Regis College and was valedictorian in 2006. She earned her Ph.D. in 2009 under the direction of Dr. Joshua Hamilton in the Program in Experimental and Molecular Medicine at Dartmouth. She completed a postdoctoral fellowship with Richard Enelow, M.D., in the Department of Immunology at Dartmouth Medical School in New Hampshire.

Horvath studied the effects of low dose arsenic exposure in drinking water on the immune system in adult and developing mice. Arsenic exposure is a major health concern in the U.S. and worldwide, and is detected in a large portion of Superfund sites. Her Ph.D. thesis research was the first to demonstrate that arsenic exposure can increase susceptibility of mice to sub-lethal doses of influenza virus. Arsenic-exposed mice showed increased susceptibility and severity of respiratory influenza infection as a result of a compromised innate immune system. The results of her research garnered attention from the scientific community and the mainstream media, including public radio. She used the opportunity to reach out to the public and raise awareness about arsenic exposure. She continued this research as a post-doctoral fellow, focusing on immunological effects in offspring after maternal exposure during pregnancy in mice.

Horvath is currently a Scientist at Genzyme, a Sanofi company, where she leads nonclinical toxicology efforts on a variety of programs.

Horvath credits SRP for offering a rigorous research environment where she continues to explore issues fundamental to the understanding of how toxicants disrupt human health. She is often reminded of other research disciplines that also contribute to this understanding. She values the interdisciplinary approach supported by SRP during her training, and plans to continue to integrate this approach into her future research.

The NIEHS congratulates Horvath on her accomplishments and wishes her continued success in her career.