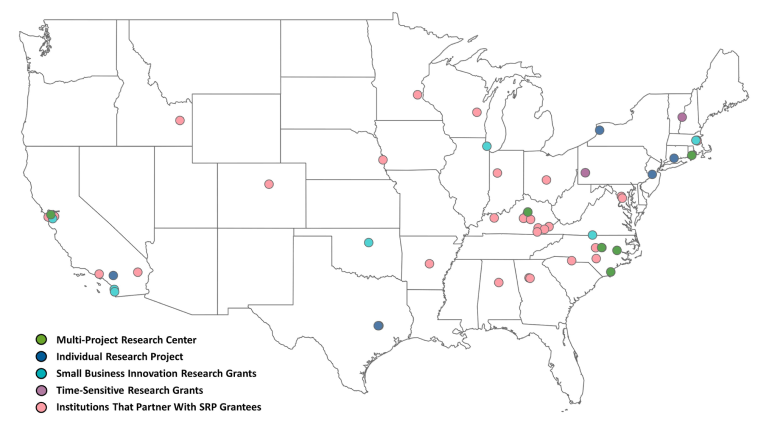 This map shows the locations of current and past SRP-funded projects related to PFAS.

Since PFAS production began in the 1940s, the chemicals have been widely used for their oil- or water-resistance, heat tolerance, and low-friction qualities. Indeed, a 2020 study funded partly by SRP described more than 200 uses for more than 1,400 individual PFAS, noting that nearly all branches of industry and many everyday products rely on the chemicals. For example, PFAS enhance firefighting suppressants, lubricate jet engines, and curb steel corrosion. They also fend off fabric stains, lend anti-stickiness to cookware, and imbue makeup with durability.

At any point from production to disposal, PFAS can escape into soil, water, and air, according to a review funded by SRP and others. Bound by strong chemical bonds, the chemicals resist natural degradation and can accumulate in ecosystems and organisms. More than an estimated 2,800 U.S. locations have some level of contamination — in 2019, the EPA documented 180 PFAS-contaminated Superfund sites alone — and nearly all Americans have been exposed to at least one chemical, according to the NASEM report.

Exposure can occur through various routes, such as ingestion and inhalation. Although certain occupational activities — like painting or firefighting — pose a unique risk, people can breathe in PFAS in everyday environments as well, according to an SRP-funded study cited in the NASEM report. Using sheets made of polyethylene, a type of plastic, researchers measured PFAS levels in kindergarten classrooms and several other indoor locations. They found that carpets and dust are major sources of certain PFAS in indoor air.

Until recently, researchers knew little about how PFAS affect health. But growing evidence suggests that PFAS exposure is associated with negative health effects on the immune system, metabolism, and early development, among other biological systems and processes.

SRP-funded researchers have identified ways that PFAS can harm health, providing valuable information that decision makers can use to better protect communities and patients. Their work has informed federal advisories for PFAS in drinking water, as well as recommendations for clinical care of patients exposed to the chemicals.

Across the country, SRP-funded researchers are unraveling how people encounter PFAS and the health implications of exposure. In addition, SRP supports innovative efforts to limit PFAS exposure and clean up contamination.

For example, a company called CycloPure produces a filter cartridge compatible with Brita pitchers that can remove PFAS from drinking water. The cartridges are based on technology called DEXSORB+, which the company developed through an SRP small business innovation research grant.

SRP funding through an individual research grant also enabled investigators with Texas A&M Agrilife Research to develop a plant-based material that adsorbs PFAS, along with microbial fungi that consume the so-called "forever chemicals."

Learn more about how SRP grantees are discovering new ways to detect and characterize PFAS, remediate the environment from contamination, and communicate potential health risks to communities in the March 2022 Science Digest and the June 2019 Science Digest.

In 2012, environmental scientist Philippe Grandjean, M.D., D.M.Sc., and colleagues published an NIEHS-funded study showing that high exposures to several PFAS were associated with reduced immune response to tetanus and diphtheria vaccinations in 5- and 7-year-olds from the Faroe Islands.

Grandjean had been following the North Atlantic population since the 1980s, when he started exploring fetal exposure to mercury. As PFAS emerged as a contaminant of concern, his team nimbly reoriented their research focus. Now Grandjean is a project leader with STEEP, for Sources, Transport, Exposure and Effects of PFAS, an SRP Center based at the University of Rhode Island (URI) in partnership with the Harvard John A. Paulson School of Engineering and Applied Sciences and the Silent Spring Institute.

In 2018, with SRP funding, Grandjean and University of Denmark colleague Esben Budtz-Jørgensen revealed the level of PFAS exposure necessary to elicit a negative immune response in children like that observed in the earlier study. The researchers focused on perfluorooctanoic acid (PFOA) and perfluorooctane sulfonic acid (PFOS) which, after decades of use, have been predominantly phased out in the U.S.

Both studies were foundational to interim drinking water health advisories for PFOA and PFOS released by the EPA in June 2022. Radhika Fox, of the EPA Office of Water, announced the news at the 3rd National PFAS Meeting, co-funded by NIEHS and organized by a committee that included several SRP grantees, among them Grandjean.

"Our findings on PFAS-induced immunotoxicity and our calculations from the SRP-funded study helped EPA determine a reference dose for each contaminant — that is, a concentration level at or below which daily exposure is unlikely to lead to negative health effects," Grandjean explained.

"The low exposure limits aim to protect all people, including the next generation by limiting the overall intake of PFAS so that new mothers are not passing on toxic amounts through the placenta or via human milk," he added.

The health advisories also provide technical information that federal, state, and local agencies can use to address PFAS in drinking water through water quality monitoring, by improving existing technologies to reduce contaminant levels, and by devising ways to minimize exposure.

Before publishing the advisories, the EPA considered input from a review panel chaired by Weihsueh Chiu, Ph.D., deputy director of the Texas A&M SRP Center. Following several public meetings that informed the review, Chiu presented the panel's recommendations to the EPA in July 2022.

Committee members mined recent scientific literature for connections between human health effects and PFAS, leaning on several SRP-funded studies to draw conclusions. They focused on the PFAS commonly studied in humans. However, citing a paper co-authored by SRP-funded researchers, they noted that other PFAS with similar biological persistence and toxicities may also be harmful to health.

Among their findings, the committee determined that, based on limited evidence, an association might exist between exposure to PFAS and high blood pressure and preeclampsia in pregnant women. Work published in 2021 by Grandjean and colleagues informed that decision. Although his team found no clear connection between PFAS exposure and high blood pressure or preeclampsia in pregnant women, they did observe slight — albeit, not statistically significant — increases in blood pressure for PFOS and PFOA.

Considered at the population level, that association could manifest as an increased incidence of gestational hypertension, the authors explained. High blood pressure during pregnancy could have a lasting effect on the mother's health and that of her child, they added.

Committee members also concluded that limited evidence suggests the possibility of a connection between PFAS, thyroid hormones, and thyroid disease. Among several papers, they cited a 2020 study published by Grandjean and team that examined links between PFAS exposure, thyroid hormone levels in pregnant women, and birth outcomes. Overall, the researchers found PFAS to be associated with dysfunction of the thyroid gland.

The committee looked for ties between PFAS and the severity of COVID-19 as well, singling out a study led by Grandjean. After analyzing plasma samples from more than 300 people with COVID-19 for exposure to five types of PFAS, the researchers found that high plasma concentrations of a PFAS chemical called perfluorobutanoic acid were associated with an increased risk of more severe cases of COVID-19.

Because plasma samples indicated an overall low level of exposure to PFAS, however, Grandjean's team indicated that additional research should explore links between COVID-19 severity and PFAS in populations with higher exposure. For their part, the NASEM committee decided that insufficient evidence exists to conclude how PFAS exposure may influence COVID-19 infection at this time.

Among its recommendations, the NASEM document advises clinicians to offer PFAS blood testing to patients who likely have histories of high exposure, such as workers exposed on the job and people who have either lived in communities with documented contamination or where high exposure may have occurred, such as near commercial airports, military bases, or wastewater treatment plants.

The report also suggests that the Centers for Disease Control and Prevention, the Agency for Toxic Substances and Disease Registry, and public health departments create educational materials for clinicians to better understand PFAS exposure and potential health effects, as well as the pros, cons, and limitations of testing. To better surveil exposures, laboratories conducting PFAS testing should report the results to state public health authorities, the publication adds.

"The goal was to hear the perspectives of people from all around the U.S., including Pacific Islanders and other disproportionately affected communities," said Brown in a 2021 SRP news story. "This shed light on the similarities across different regions, the issues they are facing, and their concerns."

"Overwhelmingly, community members want their exposures and potential health risks to be taken seriously," observed DeWitt in the SRP news story. "They would like to have more information about their exposure levels and how to prevent adverse health effects."

Before releasing the report, the committee requested a formal review from a panel that included Julia Brody, Ph.D., of the Silent Spring Institute and the URI SRP Center, Grandjean, and Heather Stapleton, Ph.D., co-director of the Duke SRP Center, among others. On July 28, 2022, several committee members presented the final NASEM guidance in a public webcast.

Asked what avenues of PFAS research committee members are particularly interested in, Hoppin of the NCSU SRP Center shared her thoughts:

"One of the things that we recommended was that, if [PFAS] testing is implemented, is then to create databases so that we can identify PFAS hotspots," she said. "That would help inform how to put our public health practices together."