Researchers at the NIEHS Superfund Research Program (SRP)-funded Center at the University of Iowa developed new methods to improve how we compare and quantify sources of polychlorinated biphenyls (PCBs) in air. Their work is informing policies and strategies to clean up these contaminants in air, including at Superfund sites and in schools.

Found at approximately 30% of Superfund sites, PCBs are a large group of chemicals that can persist in the environment. Some PCBs are well characterized and have been linked to cancer and other harmful effects, such as diabetes, liver disease, skin ailments, and immune, neurological, and respiratory issues.

A group of 209 PCBs — known as Aroclors — were manufactured in the middle of the 20th century as components of electrical transformers, fluorescent light ballasts, hydraulic fluid additives, building materials, and flame retardants. Although Aroclor PCBs were banned in the U.S. in 1979, they can still be found in soil and water, and in old insulation and electrical equipment.

Another large group of PCBs, called non-Aroclor, continue to be manufactured, largely as byproducts of certain industrial processes. These chemicals, and their sources, are not well characterized. 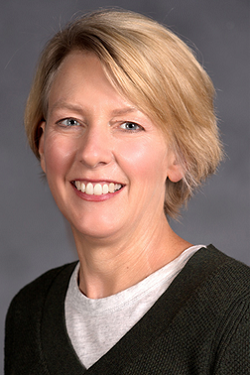 Led by Center Director Keri Hornbuckle, Ph.D., the University of Iowa SRP Center team is renowned for their insights into sources of PCBs, how people may be exposed to them, and potential for remediation.

Hornbuckle was long interested in studying PCBs and through her work with the SRP center, she became interested in identifying sources of PCBs to prioritize opportunities for remediation.

"If we can determine where PCBs are coming from, it will cost a lot less money to clean them up," said Hornbuckle in an NIEHS Story of Success.

PCBs can move from water to air. The team, including former trainee Andres Martinez, Ph.D., developed a method to simultaneously use two simple and cost-effective passive samplers to measure this movement, or flux.

Their method employs a polyurethane foam passive air (PUF-PAS) sampler and a low-density polyethylene water sampler, both frequently used to capture and measure PCBs. The team deployed the samplers in the Indiana Harbor and Ship Canal in East Chicago and found a strong relationship between the concentration of PCBs in water and air.

In a series of related studies in the Indiana Harbor and Ship Canal, Hornbuckle and team quantified PCBs migrating from sediment and water into air.

The researchers also work closely with communities to report back their findings and help them make informed decisions to protect their health. In response to concerns raised by communities near the sites, they conducted field and modeling studies to assess the potential risks associated with exposure to PCBs in outdoor air. The scientists observed that health risks, such as thyroid effects, may be higher in communities living closest to the site. 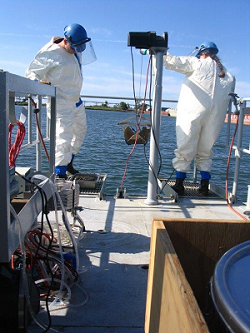 Martinez, left, and an U.S. Environmental Protection Agency employee conduct sampling in the Indiana Harbor and Ship Canal.
(Photo courtesy of the University of Iowa)

By applying their novel sampling and detection strategies, Hornbuckle and collaborators revolutionized our understanding of PCBs as urban air pollutants.

For example, the researchers developed high-volume sampling equipment which allowed them to carry out air sampling at more than 50 sites in Chicago. They found that 91% of the 184 samples contained PCB11, a previously unidentified contaminant in urban air, at concentrations higher than what was reported to be in commercial Aroclors.

Air sampling in Chicago, conducted over seven years, revealed the prevalence of many other non-Aroclor PCBs in air. According to the team, past systems for measuring the chemicals were developed to detect only Aroclors, which meant that modern non-Aroclor PCBs went unnoticed. Hornbuckle now concludes that about 15% of airborne PCBs originate from non-Aroclor sources, including byproducts of pigment and polymer manufacturing.

Hornbuckle and her team were among the first to observe that people can be exposed to PCBs indoors, at concentrations similar to or higher than outdoors. They also reported that indoor exposure through inhalation can be almost as high as exposure through diet.

Because children are particularly vulnerable to environmental exposures, the team is studying sources of PCBs in public schools. According to Hornbuckle, older and lower-income public schools may present a major exposure risk, and inhalation is one of the largest exposure routes for many children. 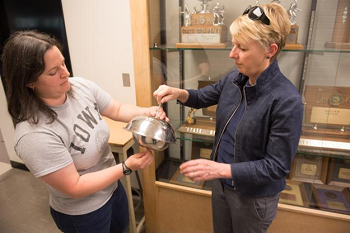 "Many American schools were built in the middle part of the last century, and PCBs were widely added to building materials because they make resilient materials that don't need replacement," Hornbuckle explained during an NIEHS Keystone Science Lecture.

In the largest survey of PCBs in schools to date, the scientists identified several outdated building materials, such as window caulking and light ballasts, and PCB-contaminated paint pigments as sources of airborne PCBs in schools.

Led by Hornbuckle, trainees Jacob Jahnke and Moala Bannavti are studying where PCBs come from in a schoolroom based on the age of the room, the overall air profile, and the visible materials within the room.

The team observed that exposure to PCBs inside a secondary school in Iowa was higher than outdoors and that the concentrations and types of PCBs varied from one room to another. According to the scientists, their approach could lead to more cost-effective remediation in schools by prioritizing specific materials to be removed rather than demolishing an entire school.

The University of Iowa SRP Center team, in collaboration with Environment and Climate Change Canada, developed a model to help more accurately determine air pollutants concentrations, including PCBs, in air.

The team designed a web-based application, that predicts the sampling rates and volumes captured by PUF-PAS samples at any location in the world. Jahnke and SRP trainee Connor Johnson are updating the website to include more variables.

According to the team, this application will help researchers and policymakers predict the concentration of air pollutants, informing new research and policies to reduce air pollution.

Bannavti described this work in a video, for which she won first place in the University of Iowa's Three Minute Thesis competition.

"We hope to make PCB remediation cheaper, thus making it more equitable and accessible for all school districts," said Bannavti.

"As scientists, we hope our work leads to direct improvements to human health," Hornbuckle told the NIEHS Environmental Factor.

Former trainee Nicholas Herkert discovered that PCBs were emitted as by products from some polymer coatings used on new kitchen cabinets. After Herkert's study was published, research by a regulatory agency in Germany found the same compound in a German community near a plant that produced silicon polymers.

Informed by Herkert's research, as well as the chemical process that led to PCB emissions, the agency amended its rules to require stricter controls for facilities using this chemical, resulting in lower levels of PCBs in the surrounding community.