A bill to sharply lower the drinking water limit for arsenic in New Hampshire was signed into law by Governor Chris Sununu on July 12, 2019. The new rule, informed by Dartmouth College Superfund Research Program (SRP) Center research and outreach efforts, sets the state Maximum Contaminant Level (MCL) at 5 parts per billion (ppb), which is half of the federal limit. According to the New Hampshire Department of Environmental Services (NHDES), the new limit will better protect human health by reducing the number of arsenic-related illnesses and deaths.

Arsenic is present throughout Earth's crust. In populations around the globe exposed to high levels of arsenic, higher rates of cancers, cardiovascular diseases, diabetes, and other health conditions have been found. However, most people are exposed to only low levels of arsenic; for decades, these low levels have remained an area of uncertainty in regard to their health effects.

Dartmouth SRP Center researchers have made important discoveries about how people are exposed to low levels of arsenic and how it can affect their health – discoveries that informed efforts to reduce the MCL in New Hampshire.

The Dartmouth SRP Center has also made important discoveries about how people are exposed to arsenic through food and how dietary arsenic can affect human health:

The team investigated the sources of arsenic in New Hampshire's drinking water using geologic and spatial analysis and samples collected from over 10,000 households. They determined that wells drilled deep into the underlying granite had much higher arsenic levels than shallow surface wells. The high concentrations of arsenic in deep wells correlated with pegmatite within the bedrock, a geological formation common to many parts of New England. Their geologically based model of arsenic distribution was used to inform their epidemiological studies and was used by NHDES and New Hampshire Department of Health and Human Services (DHHS) staff to prioritize areas with high levels of arsenic exposure.

To further refine exposure estimates, the team developed a technique to accurately measure very low arsenic concentrations in drinking water. Their technique improved the relative sensitivity and accurately measured arsenic at concentrations between 0.01 ppb and 1 ppb, compared to traditional methods that performed well only at levels above 1 ppb.

They also refined methods to understand the amount of arsenic that gets into people's bodies. They verified that toenails can be used as a reliable biological marker of exposure to arsenic in drinking water, even at low exposure levels. Unlike other samples, like urine or blood, that capture only recent exposure, toenails represent exposure over longer periods of time.

Transdisciplinary teams of researchers from SRP Centers across the country have made important discoveries about how arsenic harms human health. For example:

In a project led by Margaret Karagas, Ph.D., the team has made important discoveries about how exposure to arsenic can harm human health. Leveraging their advances in measuring arsenic in water and characterizing exposure through biomarkers, the researchers were among the first to provide information linking individual exposure to low levels of arsenic with an increased likelihood of developing skin cancer and bladder cancer in a U.S. population. By further improving the accuracy of ultra-trace detection in urine, they also were able to better characterize the relationship between low arsenic exposure and squamous cell carcinoma of the skin and capture how people metabolize arsenic differently.

New Hampshire has a high percentage of people drinking well water that is often untested and not regulated for arsenic. In a collaborative study with researchers from the National Cancer Institute; the health departments of Maine, New Hampshire, and Vermont; and the U.S. Geological Survey (USGS), the team identified a 20% higher bladder cancer rate in New Hampshire compared to the national average due to the prevalence of arsenic in wells. This large study was consistent with their earlier work showing that low to moderate levels of arsenic exposure may increase bladder cancer risk and that cigarette smoking may worsen the association.

In the New Hampshire Birth Cohort, funded by NIEHS, the team reported connections between low arsenic exposure and adverse birth outcomes in infants, including decreased fetal growth. They found that each doubling of arsenic in the mother's urine was associated with a 0.1 cm decrease in head circumference, with similar results for total arsenic and arsenic metabolites. 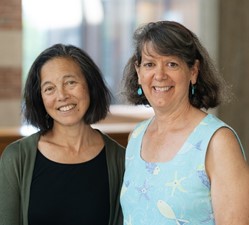 In mothers, they found low levels of arsenic increased the odds of developing gestational diabetes and that this association may be stronger in obese women. They also found a link between arsenic exposure and increases in blood pressure over the course of pregnancy, which may have important implications for public health because even modest increases in blood pressure can increase risk for cardiovascular disease.

Based on studies in rodents and cells, the researchers reported that arsenic is a potent endocrine disrupter, blocking the ability of several hormones to properly signal in the body. For example, they identified impacts on the glucocorticoid receptor, which regulates genes that control important metabolism and immune response functions. They also reported differences in how low levels of arsenic affected hormones compared to higher levels of arsenic. For example, at lower doses, arsenic stimulated glucocorticoid receptors, while at high doses, it inhibited the receptors, suggesting that arsenic may have very different biological effects at different doses. 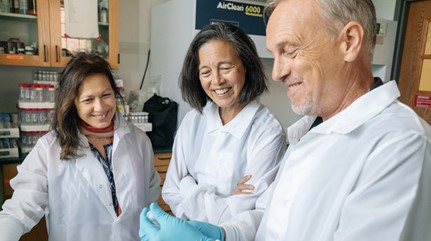 In human lung cells, they found that low arsenic exposure alters gene expression and innate immune responses when those cells encounter a common pathogen. Their findings shed light on the underlying mechanisms by which exposure to arsenic may increase the likelihood of infection in the lung and chronic obstructive pulmonary disease. They also showed for the first time that arsenic metabolites have negative effects on the immune response of lung cells.

According to Chen, collaborative partnerships were vital to the change in the New Hampshire arsenic limit. Agencies that worked together as part of the New Hampshire Arsenic Consortium included the NHDES, New Hampshire DHHS, USGS, U.S. Environmental Protection Agency (EPA), as well as state and local government officials. 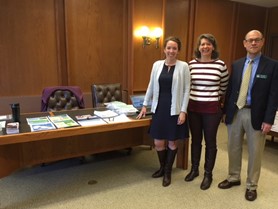 Since its formation in 2001 and its reorganization in 2010, the Dartmouth SRP Center has led the New Hampshire Arsenic Consortium, which brings its partners together with the water industry and community members to strengthen communication and develop strategies to reduce exposure to arsenic in the state. Together, the group significantly enhanced awareness about arsenic exposure and related health effects and provided stakeholders with the information they needed to act.

"Our longstanding, trusted partnerships allow us to use our collective expertise to communicate our science, educate New Hampshire residents, and connect with diverse stakeholder groups," said Laurie Rardin, the Research Translation Core (RTC) coordinator. "The consortium empowers its members to participate in lowering arsenic exposure rates in the state by developing consistent messaging and identifying more effective ways to tackle the challenges inherent with creating behavior change to reduce arsenic exposure."

In June 2018, in the face of mounting evidence regarding the health effects of arsenic, as well as the Arsenic Consortium's efforts, the New Hampshire legislature directed NHDES to review the arsenic MCL. In December, NHDES submitted a report recommending a more protective limit. Their report was strongly rooted in research from the Dartmouth SRP Center, the Dartmouth Children's Environmental Health and Disease Prevention Research Center, which has followed children exposed in utero to arsenic and other contaminants in the New Hampshire Birth Cohort Study, and the Columbia University SRP Center's research on the impacts of arsenic on children's IQ. Their report also considered the prevalence of arsenic in New Hampshire water supplies, the health impacts that could be avoided by lowering the limit, and the cost of water treatment.

"Reducing the arsenic MCL is consistent with the decades of research from Dartmouth and others linking arsenic to negative health effects," said Chen. "Our team is proud to have played a leading role in helping the state make this decision to protect the health of people throughout New Hampshire."

The current rule specifically limits arsenic in public water systems. Because approximately 46% of New Hampshire residents rely on private wells that will not fall under the new guidelines, the Dartmouth SRP Center team hopes the change will also promote more voluntary testing and treatment.

Through their Community Engagement Core (CEC) and RTC, the team works extensively with private well owners throughout northern New England to enhance their ability to understand and address the health risks posed by arsenic. They actively engage community members, regulatory partners, and lawmakers by sharing research results and resources they can use. 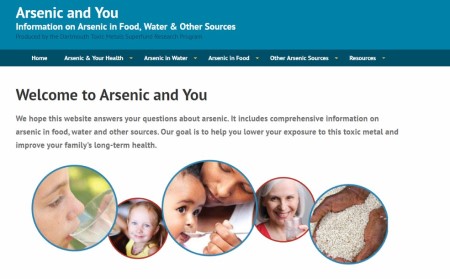 Based on the needs identified by these efforts, researcher Bruce Stanton, Ph.D., evaluated the effectiveness of commercially available tabletop water filters at removing arsenic from drinking water. They compared five pitchers ranging in price from $20 to $35 for the pitcher and $10 to $15 for replacement filters and reported one that successfully reduced arsenic levels from 1000 ppb to less than 3 ppb. This information is useful for people who may have arsenic in their drinking water and is an example of addressing community needs through investigator-initiated research and research translation.

Under the leadership of Rardin, the RTC and CEC developed a variety of outreach materials to explain how people are exposed to arsenic and how they can prevent or reduce their exposures. This information is available through their comprehensive website launched in 2017, Arsenic and You. They also developed the Well Water Community Action Toolkit, which provides a step-by-step guide to help communities ensure the safety of private well water, and an informational video.