Wildlife inhabiting hazardous waste sites are intimately associated with the contaminated environment and thus can serve as front line indicators of pollutant levels and potential health impacts. Monitoring the health of wildlife can provide important information about the bioavailability of contaminants at hazardous waste sites, supporting the design of appropriate remediation strategies. These data can result in substantial savings of limited remediation resources while maximizing preservation of important natural areas and supporting effective remediation of the site.

Working with the University of Washington Superfund Research Program, Dr. Mike Hooper from the Institute of Environmental & Human Health at Texas Tech University has shown that wildlife biomonitoring provides a practical and sensitive means for determining whether the contaminants at hazardous waste sites find their way into the food chain at biologically significant levels. He leads a team of researchers that has developed biochemical, physiological, histopathological, and behavioral biomarkers in birds and mammals inhabiting contaminated sites to develop health-based exposure and effects data for wildlife. These biomarkers include reproductive success, cytochrome P450 activity, cellular and humoral immune function and porphyrin profiles. Monitoring these biomarkers in indigenous wildlife during and after clean-up activities allows the scientists to determine the biological effectiveness of remediation efforts.

Their largest biomonitoring project was at the Rocky Mountain Arsenal located approximately 10 miles from downtown Denver. The Arsenal site encompasses 27 square miles including prairie, wetlands, lakes, and rolling uplands and is home to approximately 250 species of wildlife including bald eagles, coyotes, deer and badgers. During its 50 years as an active Army installation, the Arsenal was a site of manufacture for chemical warfare agents, incendiary munitions, and pesticides. The U.S. Fish and Wildlife Service worked with the U.S. Environmental Protection Agency (EPA) to transform this formerly "top secret" operation into a National Wildlife Refuge which opened to the public in April, 2004. Dr. Hooper collaborated with the Fish and Wildlife Service in investigations of the health of wildlife populations living in the Arsenal to monitor the biological effectiveness of the Arsenal site clean-up.

The main contaminant of concern at the study site was dieldrin, an organochlorine insecticide that suppresses the immune system and damages the liver in laboratory animals. Dieldrin was highly concentrated in a region of the Arsenal where production wastes were discharged into open basins for evaporation. Wind borne dusts from those basins transported dieldrin throughout the Arsenal where low level contamination posed the dilemma of whether to remediate or preserve the natural habitats for the indigenous wildlife.

In order to determine where dieldrin's effects occur, and at what soil concentrations, Dr. Hooper's team monitored the health of rodent and starling populations from plots located in areas that ranged from highly contaminated to those considered undisturbed. Rodent demographics were particularly sensitive to dieldrin exposure. The diversity of rodent communities decreased with increasing insecticide concentrations in the soil. Most species, except for deer mice, were absent from areas of high dieldrin concentrations. In the most contaminated areas the deer mice showed a decreased life expectancy and increased reproductive rates suggesting that a shift to less sensitive, quickly reproducing species had occurred.

Because birds sample the food chain, soil, water and air for all potentially bioavailable contaminants, they may respond to the impacts of complex mixtures of contaminants from multiple pathways of exposure. The effects of multiple and diverse exposures would be impossible to assess based on individual chemical toxicity analyses alone. A significant advantage of the use of starlings in biomonitoring is that nest boxes can be easily constructed, placed at specific locations on hazardous waste sites and indigenous starlings will nearly always use them.

The impact of dieldrin on the starlings was highly variable depending on the location of their nest boxes. Nest boxes located in areas of high contamination resulted, in some cases, in outright mortality of the birds. Intermediate effects included reproductive failure. Starlings from nest boxes located in areas of low contamination showed no apparent effects. Thus, these studies identified areas where the contaminants in the soil were bioavailable at toxicologically significant levels. These results indicate that scientists may be able to use some species to determine whether certain contaminants at hazardous waste sites exist in levels that are harmful to wildlife. Hooper's findings were successfully introduced into the remediation site assessment of the Rocky Mountain Arsenal where the results of the panel of bioassays and contaminant analyses of soil were used to make decisions about site remediation and have been incorporated into the long term biomonitoring program at the site. Furthermore, the Fish and Wildlife Service is incorporating this approach to site assessment at other sites where impacts of contaminants on wildlife are of potential concern. 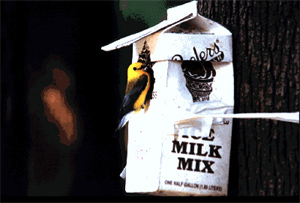 Hooper and his fellow researchers conducted a second study in a hardwood bottomland floodplain (a seasonal swamp) that is on the National Priority List. The site owners had conducted extensive soil analyses and the SRP researchers incorporated these data into a geographic information system (GIS) to develop a geographic distribution of dichlorodiphenyltrichloroethane (DDT), DDT metabolites and mercury soil contamination. The scientists placed approximately 200 nest boxes throughout the study site. The SRP researchers studied prothonatory warblers (Protonotaria citrea), using radiotelemetry to triangulate specific foraging positions and ranges for both male and female adults. The scientists collected diet, egg, and nestling tissue samples and analyzed each for of DDT, DDT metabolites, and mercury. These data were then added to the GIS program for comparison with soil contaminant distributions.

The study site has heterogeneous contaminant levels as the result of seasonal flooding and topography modifying the original contaminant deposition areas. The unique design of this project allowed the researchers to control for variables that often confound this type of study. The scientists were able to match foraging areas to specific nesting pairs and use only soil concentration data from the appropriate foraging locations in their analyses of trophic-level transfer of contaminants. The researchers learned that while male and female prothonatory warblers fed at similar rates, the females tended to use larger foraging ranges. They therefore corrected their data to incorporate the feeding areas of both the adult male and female warblers. The results of this study suggest that contaminant residue concentrations in bird tissues can be reasonably predicted from residue concentrations in the soil. The study demonstrated that warblers accumulated renal mercury from their diet at levels that correlated with soil and sediment levels. The researchers also found that soil concentrations of DDT and its metabolites were effective in describing the variation of contaminants in adipose tissues. The findings of this research were incorporated into ecological risk assessments used in the remedial investigation and the record of decision process prior to the completion of the actual site remediation planning process.

The scientists have used their wildlife biomarker techniques in several other field studies at the following National Priority List sites: