The Health Effects of Arsenic Longitudinal Study (HEALS) is a large, prospective cohort study in Bangladesh that has become a landmark research resource to understand the health effects resulting from arsenic exposure and the underlying biological mechanisms involved. With funding from the NIEHS Superfund Research Program (SRP), the cohort was first established in 2000 with 12,000 participants. Since then, it has expanded to include over 35,000 people. 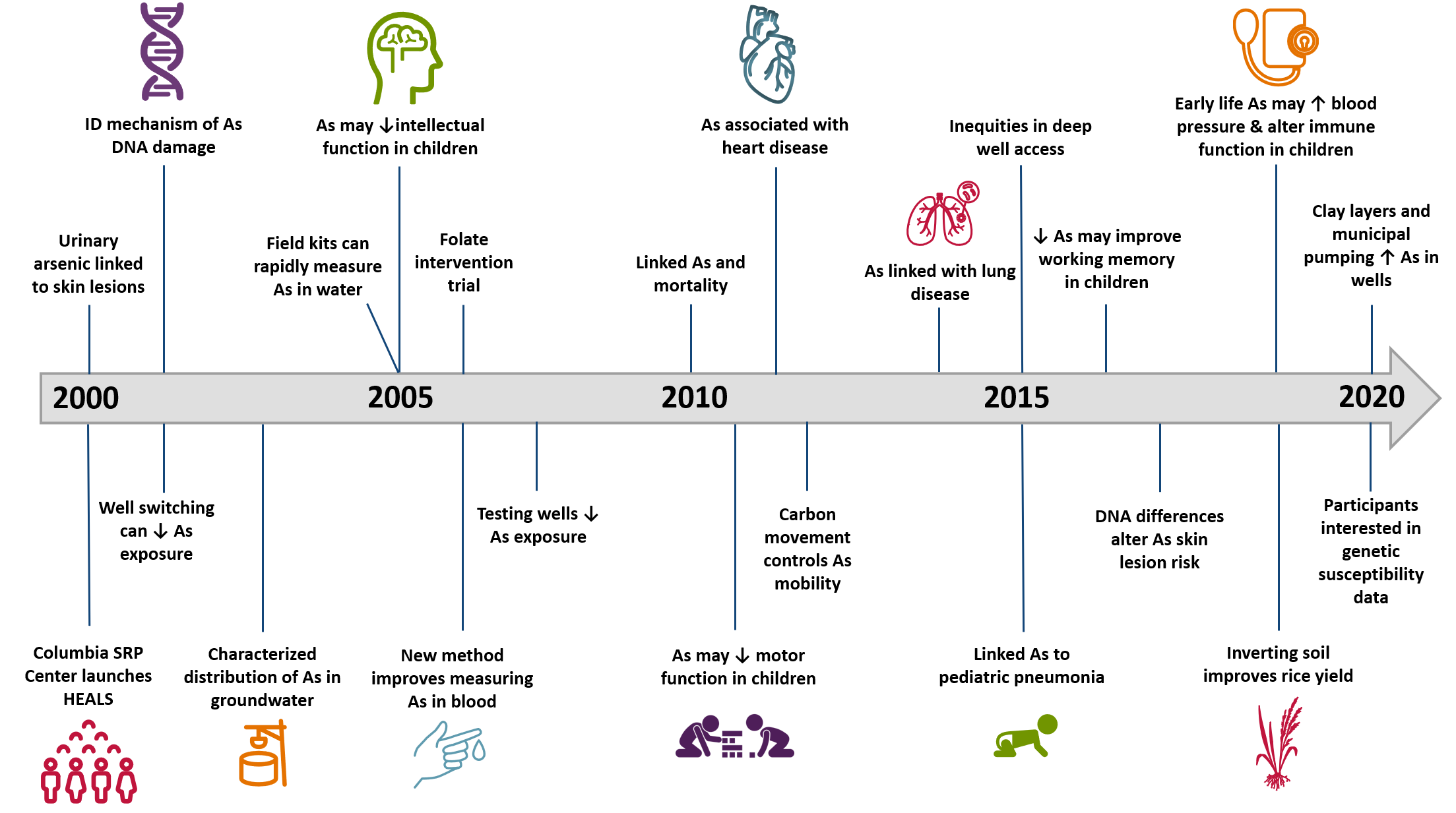 Arsenic is a naturally occurring element present throughout the Earth's crust, with some areas having higher levels of groundwater arsenic than others. Millions of U.S. residents are exposed to arsenic in their household well water due to natural geology. In the U.S., arsenic has been found in at least 1,676 of the 1,813 current and former National Priority List sites identified by the Environmental Protection Agency. Populations exposed to arsenic in the U.S. and around the globe experience higher rates of cardiovascular diseases, cancer, diabetes, and other health conditions. 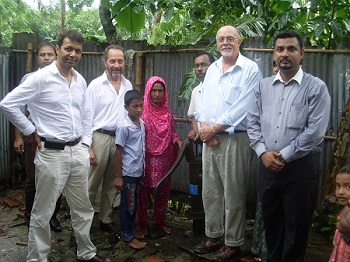 Ahsan, front left, pictured next to Graziano and SRP Director Bill Suk, Ph.D., stands with HEALS participants next to a well that the team installed. The well is marked with a blue tag, indicating that the water is safe for drinking.
(Photo courtesy of Habib Ahsan)

For over 20 years, researchers at the NIEHS-funded Columbia University SRP Center, including former Center Director Joseph Graziano, Ph.D., Project Lead Habibul Ahsan, M.D., of the University of Chicago, and Center Co-Director Alexander van Geen, Ph.D., have expanded the number of participants in HEALS and the scope of their research with funding from SRP and other grants from NIEHS, the National Institutes of Health, and the National Science Foundation.

According to the team, SRP’s support of this flagship project provided a unique opportunity to study the complex environmental health issues in the HEALS cohort and to develop intervention strategies to address them. 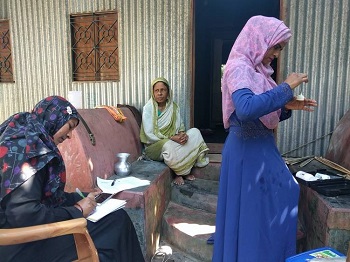 By combining basic biomedical research and studies in the HEALS population with environmental science and engineering, research has successfully moved from fundamental research questions to concrete human health benefits. The research team: 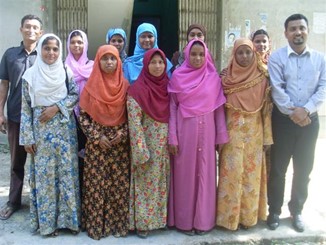 A team of 10 local women tested all 50,000 wells in the Araihazar region using a field kit in 2012-2013. The team attached blue, green, or red metal placards on each pump according to the result.
(Photo courtesy of Alexander van Geen)

“Much of our success over the years is due to contributions from the entire multidisciplinary team, including epidemiologists, nutritionists, social scientists, biomedical researchers, and environmental scientists. The collective and complimentary expertise has been crucial to everything we have achieved,” said Ahsan.

Building on this groundwork, researchers have continued to leverage the HEALS cohort to explore evolving and complex research questions. For example, they uncovered genetic differences that may control arsenic metabolism and susceptibility to arsenic-induced skin lesions. They also observed interesting interactions between arsenic exposure, immune function, and vitamin D as a protective factor. In addition, the team is exploring the relationship between body mass index arsenic metabolism. 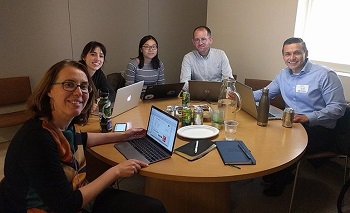 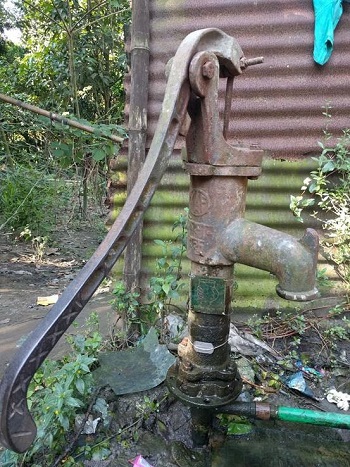 The team received additional funds through SRP to integrate and share HEALS data with other SRP-funded researchers at the University of California (UC), Berkeley and University of New Mexico (UNM) SRP Centers, to answer new research questions about arsenic. Through this collaboration, they linked data on arsenic in biological samples with arsenic measured in environmental samples across three different populations and identified unique factors contributing to arsenic levels in different groups.

In a separate collaboration with UC Berkeley researchers, the team leveraged data on arsenic and epigenetic changes, which alter the expression of genes, in different populations. Their goal was to identify whether epigenetic changes related to arsenic exposure are generalizable across study populations and therefore useful biological markers for understanding potential impacts on human health.

According to Ahsan, HEALS is a one-of-a-kind resource that his team and collaborators have made usable and accessible to scientists across the country and around the world. They shared data, biological samples, hydrogeochemical data, and environmental samples, allowing diverse groups of researchers to produce hundreds of high-quality publications based on HEALS.

The cohort has also launched the careers of many junior investigators who have used this resource to pursue new research questions. For example, former SRP trainee Maria Argos, Ph.D., of the University of Illinois at Chicago, received an NIEHS individual research grant to investigate early life growth trajectories among children of HEALS participants. Another former Columbia SRP Center trainee, Tiffany Sanchez, Ph.D., was awarded one of SRP’s first Research Supplements to Promote Diversity in environmental health research. Sanchez recently studied metal mixtures in the HEALS population, and is now extending that work to U.S. populations.

Rural Bangladesh, home to the HEALS cohort, has limited infrastructure, particularly for collecting medical data. To address this challenge, the team established health clinics throughout the study area to collect information needed to assess the health outcomes of arsenic exposure while also offering participants access to free or subsidized health care. HEALS participants also receive health education, including information on how arsenic exposure may affect their health and strategies to reduce their exposure, such as information on safe wells for drinking water.

The researchers needed to understand how much arsenic people were exposed to, so they measured arsenic concentrations in every well in the study area and shared the information with the community. They also installed hundreds of deep wells to provide drinking water with lower levels of arsenic.

The team of Columbia University geoscientists and economists and long-standing collaborator Kazi Matin Ahmed, Ph.D., of Dhaka University, frequently interact with senior managers in the Bangladesh government’s Department of Public Health Engineering. The team is designing a smartphone app, which will provide access to detailed maps of millions of new arsenic well tests throughout the country.

Yu Chen, Ph.D., from New York University, has collaborated with the Columbia SRP Center team to study the health effects of arsenic exposure for the last 18 years. A former NIEHS Outstanding New Environmental Scientist (ONES) awardee, Chen contributed to groundbreaking work linking arsenic to cardiometabolic outcomes in children. Recently she leveraged HEALS to explore the connection between arsenic exposure, the gut microbiome, and cardiovascular disease.

“HEALS is a unique and unprecedented resource in a number of ways,” said Pierce. “It’s a large study that provides individual-level data on exposures, health effects, and the genetic differences among people, allowing us to look more closely at how genes and the environment interact and lead to certain health effects.”