Exposure to hazardous substances in the environment can affect animal and people's health in a variety of ways, contributing to or worsening conditions such as respiratory or cardiovascular diseases, diabetes, obesity, neurological disorders, or even cancer. Understanding how these agents trigger biological responses that lead to disease is critical to designing new approaches to reduce their toxicity and improve health.

Hammock and his team are renowned for their discovery of soluble epoxide hydrolase (sEH), an enzyme in the body that breaks down fatty acids. Fatty acids are nutrients that have many important functions in the body, such as regulating biological processes or being involved in the body's inflammatory response.

Trained as an entomologist and toxicologist, Hammock's early years were spent studying how caterpillars become butterflies, a process called metamorphosis, to design greener pesticides that interfere with that process. As a graduate student funded in part by NIEHS, Hammock and fellow student Sarjeet Gill, Ph.D., discovered sEH and its important role in metamorphosis by degrading the caterpillar's juvenile hormones.

"Sarjeet and I began to wonder if the enzyme occurs in plants, other animals, or humans and what other processes it was involved with," recalled Hammock. "We had no idea where it was going to lead, but we continued to follow the science for the next 40 years or so. It's been so rewarding to see this line of questioning start to have a real and positive impact."

"After we learned a bit about how the sEH enzyme works, we began to develop tools to block its function so we could learn more about what it does," he shared. 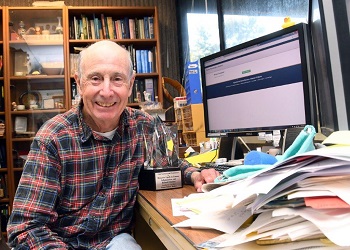 Hammock is a Distinguished Professor with joint appointments with the UC Davis Department of Entomology and Nematology and the Comprehensive Cancer Center. Hammock joined the UC Davis faculty in 1980.
(Photo courtesy of UC Davis)

To study the role of sEH to detoxify environmental chemicals, his team created potent inhibitors to investigate factors that control enzyme activity. Through these studies, they discovered it can be useful to block the function of sEH so that beneficial fatty acid epoxides, like those from omega-3 and omega-6, are not degraded.

"It turns out, sEH is involved in a very fundamental pathway called endoplasmic reticulum [ER] stress," Hammock explained. "The ER stress response, which increases or decreases inflammation and cell death depending on the situation, underlies many different diseases. We found that taking advantage of this common thread and inhibiting sEH can reduce and resolve inflammation associated with a diverse group of diseases."

Hammock and team showed how blocking sEH can potentially treat a variety of health problems:

The team also identified sEH as a novel therapeutic target for neurological diseases and disorders, including stroke, seizures, depression, Parkinson's Disease, and Alzheimer's Disease, and for reducing the severity of an age-related eye disorder called macular degeneration.

"I know it sounds almost like a snake oil, but it seems that controlling sEH can cure whatever ails you," Hammock joked.

One of the most promising applications to emerge for sEH therapies is related to pain. Hammock's team found that inhibiting sEH can treat chronic pain associated with human diabetic neuropathy, laminitis in horses, inflammation in rats, and osteoarthritis in dogs.

"Neuropathic pain largely is an untreatable disease, or it used to be,"said Hammock. "We saw this unmet medical need and really wanted to do something to make a difference. We've also done a lot of work with companion animals, who also experience pain, and horses with severe laminitis."

Hammock and his team now develop sEH inhibitors to treat pain in humans and animals through EicOsis LLC, a small business funded in part by NIEHS.

These inhibitors are more effective at reducing inflammation and inflammatory pain in rodents compared to traditional anti-inflammatory drugs. They are now studying whether the compounds block long-term pain in humans associated with other diseases and injuries.

Their leading sEH inhibitor drug candidate received clearance from the U.S. Food and Drug Administration for a clinical trial in healthy volunteers in 2019 and was granted fast-track designation for treatment of neuropathic pain in April 2020. In November 2020, EicOsis announced the successful completion of their Phase 1a clinical trial.

According to the team, sEH inhibitors may offer an important alternative to opioid analgesics for pain treatment.

"Translation is critical, but it is always important to realize that the most significant translational science we do in the university is fundamental research," said Hammock. "That is the backbone of everything we do to protect and improve public health."

Hammock has now extended this research to understanding, predicting, and resolving the inflammation associated with COVID-19 and the lung damage that can follow. 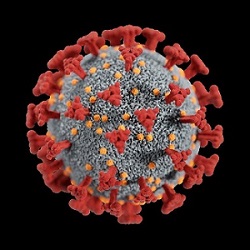 They found that certain fatty acids in the blood of COVID-19 patients may predict the severity of adult respiratory distress syndrome (ARDS) and offer a target for treatment.

In a pilot study, the team examined samples collected from six COVID-19 patients and found higher blood levels of leukotoxins and leukotoxin diols compared to healthy individuals. Leukotoxins come from linoleic acid, an abundant fat in the body, and are converted to leukotoxin diols by sEH. Hammock explained that leukotoxins are thought to be a biological marker for inflammation and to cause pulmonary inflammation.

This study was made possible in part by the UC Davis SRP Center and Hammock's grant under the NIEHS Revolutionizing Innovative, Visionary Environmental Health Research (RIVER) program. RIVER supports outstanding researchers through sustained funding and flexibility to pursue research in novel directions.

"The analytical technology used to discover these biomarkers was built over 30 plus years of NIEHS-funded research at the UC Davis SRP Center," said Hammock. "The application of our sEH studies to COVID-19 therapies is a very unexpected but timely translation of the investment in basic science by SRP and NIEHS."