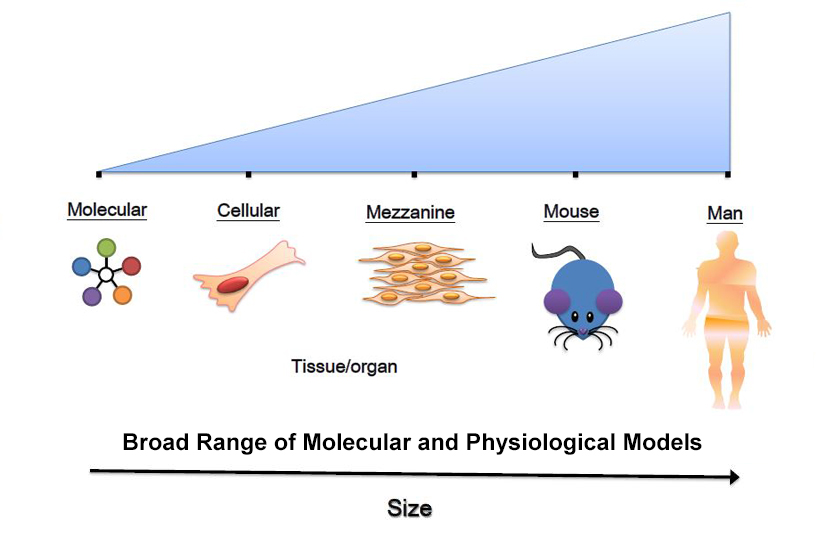 Research studies for the Calcium Signaling in Health and Disease Group range from single molecules, individual cells, and tissues to organs and whole animal physiology. In this way, the group strives to achieve a mechanistic understanding of integrative physiological responses.
(Photo courtesy of Yu-Ping Li, Ph.D.)

Anant Parekh, D.Phil., is Chief of the Signal Transduction Laboratory and head of the Calcium Signaling in Health and Disease Group. The group studies how aberrant calcium signals may contribute to disease in humans, particularly allergies and asthma.

Communication between and within cells is essential for the development and survival of any complex organism. Cells converse with each other through the judicious use of a complement of chemical messengers, including neurotransmitters, hormones, and paracrine factors. These molecules bombard the cell surface, generating further signals, or second messengers, within the cell that then trigger the appropriate responses. Although several hundred hormones, neurotransmitters, and other molecules can stimulate cells, the number of intracellular second messengers they activate is remarkably small. Perhaps the most widespread and versatile of these second messengers is the calcium ion (Ca2+).

A rise in cytosolic Ca2+ concentration is a universal second messenger utilized throughout the animal kingdom. Cytosolic Ca2+ is often considered the signal for life because it drives motility of the sperm and subsequent fertilization of the egg. Ca2+ can also terminate life by initiating cell death through the processes of necrosis and apoptosis. Cytosolic Ca2+ regulates almost all processes between life and death, including neurotransmitter release, muscle contraction, enzyme activation, and cell growth and differentiation. Given the range of key physiological responses that are activated by Ca2+, it comes as no surprise that aberrant Ca2+ signals are linked to a growing list of human diseases including hypertension, acute pancreatitis, certain cancers, allergies, asthma, and Alzheimer’s disease.

The Calcium Signaling in Health and Disease Group studies Ca2+ signaling mechanisms in general and how changes in the pattern of the Ca2+ signal can engender pathophysiology. Group members are particularly interested in a protein called the CRAC channel that lets Ca2+ rapidly enter the cell from the blood. CRAC channels are extremely important in controlling the activities of cells of the immune system, such as mast cells and T lymphocytes. A single point mutation in the gene encoding the pore-forming subunit of the CRAC channel leads to a devastating immunodeficiency in humans, as well as muscle weakness, and abnormalities in skin, hair, and teeth.

Parekh received a D.Phil. from the Department of Pharmacology at the University of Oxford and completed a postdoctoral fellowship at the Max Planck Institute for Biophysical Chemistry in Goettingen, Germany with Nobel Laureate Erwin Neher, Ph.D., and Reinhold Penner, M.D., Ph.D. He joined the Department of Physiology, Anatomy and Genetics at the University of Oxford and became Professor of Physiology and Director of the Centre of Integrative Physiology and Fellow of Merton College. Parekh has received several awards for his signal transduction research, including the Wellcome Prize in Physiology and the GL Brown Prize in Physiology. He was elected a member of Academia Europaea in 2002, the U.K. Academy of Medical Sciences in 2012 and became a Fellow of the Royal Society in 2019.