Voluntary movement, as simple as pressing a lever to obtain a food reward, requires coordinated activation of multiple brain circuits responsible for processing motivation, movement planning and movement execution. Malfunction in any of these circuits may cause severe psychiatric and neurological conditions. The In Vivo Neurobiology Group studies this ‘simple’ behavior by monitoring and manipulating the molecular and cellular events in genetically defined groups of neurons in behaving animals.

Cui and his group have developed an in vivo fiber-optics based photometry method that can measure the fluorescence signals in deep brain structures in freely moving animals. By combining this method with genetically encoded fluorescent sensors, they were able to show that the two major projection pathways in the basal ganglia, which had been thought to have opposing effects on voluntary movement, were both activated during action initiation. The findings suggest that a well-organized co-activation of both pathways is required for initiating specific movements.

To obtain more detailed local and whole brain activity patterns, the In Vivo Neurobiology Group is developing new in vivo optical methods in two directions. First, to simultaneously measure the neural activity in discrete brain regions, the group is developing a multi-channel optical fiber array system that can monitor up to 8 regions of interest bilaterally in freely moving animals. Second, to achieve cellular resolution in a localized brain region, group members are building GRIN lens based deep brain imaging systems in both head-restrained and freely moving animals. 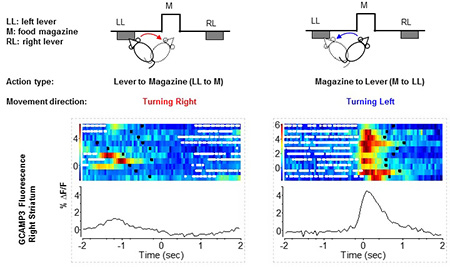 Cell type-specific neural activity measurements in behaving mice. The top two panels illustrate the behavioral task. The mouse was trained to press the levers (LL or RL) to obtain rewards, which in this case is a drop of sucrose solution. The solution is delivered into the food magazine (M). The bottom two panels show the measured fluorescence changes in the neural activity reporter GCaMP3, a genetically encoded calcium sensor. GCaMP3 is specifically expressed in striatal projection neurons. Black squares indicate the number of left lever presses, while white dots indicate the number of licks. The data shown here are from 10 trials, with each row representing one trial in the colored map.

Cui received his M.D. in clinical medicine from Beijing Medical University, now Peking University Health Science Center, in 1998 and a Ph.D. in neuroscience from The University of Texas at Austin in 2007. His doctoral work with Hitoshi Morikawa, M.D., Ph.D., focused on calcium signaling in midbrain dopamine neurons in brain slices. He joined the lab of Rui Costa, D.V.M., Ph.D., at the National Institute on Alcohol Abuse and Alcoholism (NIAAA) to expand his research to a systems level. Later, he joined the lab of David Lovinger, Ph.D., also at NIAAA. He came to NIEHS as a tenure-track investigator in 2014.