Jerrel L. Yakel, Ph.D., is Chief of the Neurobiology Laboratory and head of the Ion Channel Group. His group studies the structure, function and regulation of the Cys-loop ligand-gated ion channel superfamily, with a particular focus on the nicotinic acetylcholine receptor channels and their role in neurological disorders.

The neuronal nicotinic acetylcholine receptor channels (nAChRs) are expressed throughout the central and peripheral nervous system and are involved in a variety of normal brain functions including cognitive tasks, neuronal development, and mediating the rewarding effects of nicotine. The nAChRs are expressed both pre- and postsynaptically where they influence neuronal signaling, and are therefore a significant therapeutic target for many neurodegenerative, neurological, and psychiatric disorders such as Alzheimer’s disease, Parkinson’s disease, epilepsy and schizophrenia. A growing body of evidence indicates that many neurodegenerative diseases and disorders including Alzheimer's disease may be linked to environmental exposures. Therefore it is critical that the relative roles of environmental and endogenous neurochemicals in the susceptibility and progression of neurodegenerative diseases and disorders be investigated. To achieve that goal and to develop therapeutic agents that may help in the treatment of these diseases, it will be essential to understand the basic mechanisms of neuronal signaling. 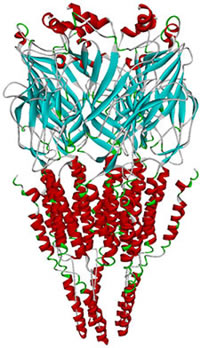 Yakel received his B.S. from Oregon State University, and his Ph.D. from the University of California, Los Angeles, where he studied ligand-gated ion channels and serotonin receptors in cultured hippocampal neurons and cell lines with Meyer Jackson. During a postdoctoral fellowship with the late Hersch Gerschenfeld at the Ecole Normale Superieure (Paris, France), he investigated the regulation of voltage-gated calcium channels by G protein-coupled receptors. During a second postdoctoral stage at the Vollum Institute with Alan North and Tom Soderling, he studied the function of regulation of ligand-gated ion channels. Yakel joined NIEHS as an investigator in 1993, and is currently a Principal Investigator in the Laboratory of Neurobiology. His group explores the function and regulation of ligand-gated ion channels, in particular the neuronal nicotinic receptor channels, in the hippocampus.