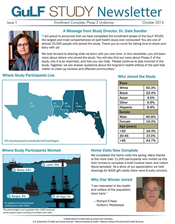 Learn more about the 33,000 people enrolled in this health study and why continued participation is so important.

Hear about the launch of the largest oil spill health study.

The Gulf Long-term Follow-up Study (GuLF STUDY) is the largest study ever conducted on the potential health effects associated with an oil spill, with nearly 33,000 participants. The GuLF STUDY is focused on prospectively determining both physical and mental health effects related to the 2010 Deepwater Horizon oil spill and is collecting information that can be used by individuals, communities and governments to better understand the consequences of oil spills and plan for future disasters.

The GuLF STUDY was initiated in June 2010 in response to the April 2010 explosion of the Deepwater Horizon drilling rig and resulting oil spill in the Gulf of Mexico. The oil spill in the Gulf of Mexico differed from previous spill in that the leak was at the ocean floor rather than on the surface. However, the area covered, the proximity to populated communities, the number of potentially exposed workers and community members, and the duration of the spill were far greater than any previously studied oil spills. Of more than 40 prior major oil spills, only 8 led to studies of health effects and only two of these – in Spain and South Korea – included any long-term follow-up. Early data from these studies suggested that respiratory and genotoxicity effects were important to capture, as well as mental health outcomes commonly associated with disasters of this scale.

The GuLF STUDY collected questionnaire data about oil-spill clean-up related exposures, health at the time of the spill and at enrollment, and lifestyle and other factors that might confound associations between exposures and health. A subset of the cohort (~11,500) comprised of workers and non-workers residing in the Gulf states completed a home exam during which biological samples were collected and banked for future research, and clinical measurements, including measures of pulmonary function, were collected. Participants included in the home visits and a sample of the remaining cohort (20,000 total) will be followed actively via telephone interviews every two to three years. Some participants from the Gulf region will be invited to participate in more comprehensive clinical exams, and all participants will be followed passively over time via linkage to cancer and mortality records.

The GuLF STUDY wants you!

If you completed a telephone interview and/or a home visit, please update your contact information. Call toll free at 1-855-NIH-GULF (1-855-644-4853) or visit the GuLF Study website.

The study protocol, questionnaires, and a document describing the strategy for exposure classification can be found online by following the respective hyperlinks. The GuLF STUDY encourages add-on studies to enhance and build on the data collected in cohort-wide data collection efforts, and plans to make study data and samples available to outside investigators for collaborative analyses and other purposes. Individuals interested in collaborating in the GuLF STUDY should contact Richard Kwok, Ph.D. to discuss opportunities.