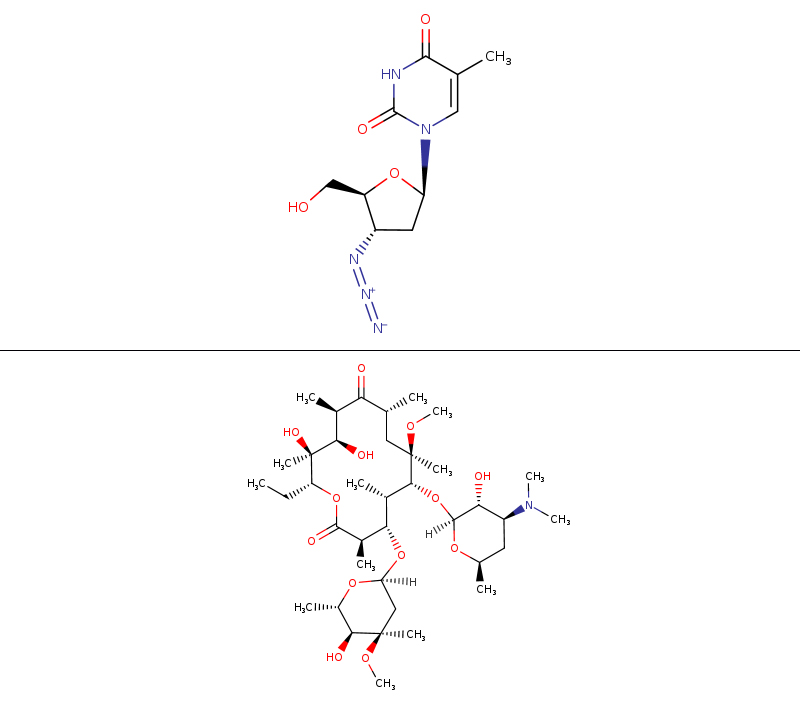 Two study protocols were used to evaluate the reproductive, developmental, and general toxicity of 3'-azido-3'deoxythymidine (AZT) and clarithromycin in Swiss (CD-1®) mice treated by oral gavage. For both studies, male mice (10 to 18/group) were dosed from study day 5 until the day prior to sacrifice on study day 25 or 26. Females were divided into two groups designated female-A and female-B mice. The female-A mice (20 to 28/group) were dosed from day 0 to sacrifice. They were cohabited with treated males on days 9 to 13 to test for effects on mating behavior, fertilization, and implantation. Caesarean sections were performed on presumed day 18 of gestation (days 28-32). The female-B mice (approximately 20/group) were cohabited with untreated males on days 0 to 4. Sperm-positive female-B mice were dosed during organogenesis on days 6 to 15 of presumed gestation and sacrificed on day 4 of lactation.

In the initial study, doses of clarithromycin (500, 1,250, or 2,500 mg/kg) were approximately 2, 5, or 10 times the human therapeutic dose. The formulations contained numerous excipients included by the manufacturer in the tablet preparation of this antibiotic for human therapeutic use. Excessive mortality occurred in male and female groups treated with 1,250 or 2,500 mg/kg of clarithromycin alone and in combination with AZT; mortality was 100% in male and female-A groups receiving 2,500 mg/kg. The mortality was attributed to a combination of toxicity in multiple vital organs and chronic dilatation of the stomach from the large volume of thick gavaged material resulting in localized complications (fungal infection and inflammation). Because of excessive mortality, a second study was conducted using 250, 500, and 1,000 mg/kg purified clarithromycin, equivalent to approximately 1, 2, and 4 times the human therapeutic dose, and 200 and 400 mg/kg AZT, which are approximately 2 and 4 times the human therapeutic dose.

The most significant effects of treatment with 200 or 400 mg/kg AZT and 250, 500, or 1,000 mg/kg purified clarithromycin are summarized here. Administration of AZT alone resulted in slight hematopoietic toxicity manifested by mild declines in red blood cell, hemoglobin, and hematocrit values. Hematopoietic cell proliferation and increased hemosiderin deposition in the spleen accompanied the mild alterations in erythrocyte parameters. Administration of 250 or 500 mg/kg clarithromycin alone did not result in significant toxicity. Administration of 1,000 mg/kg clarithromycin alone resulted in multiple organ toxicity (liver, spleen, bone marrow, kidney, brain, heart, lymph nodes, and thymus) in a few male and female-A mice. Cytoplasmic vacuolization of phagocytic cells occurred in the majority of tissues with lesions. A slight decline in body weight, slight leukocytosis, neutrophilia, and lymphocytosis occurred in the high dose female-A group.

Administration of AZT in combination with 250, 500, or 1,000 mg/kg clarithromycin resulted in hematopoietic toxicity in male and female-A mice, and the severity of the anemia was far greater than that induced by AZT alone. The anemia was accompanied by bone marrow depletion and by hematopoietic cell proliferation and hemosiderin deposition in the spleen. The anemia was macrocytic in the majority of the treatment groups but progressed to a microcytic anemia in the highest dose female-A group. Reticulocytopenia and sporadic thrombocytosis were also considered to be treatment-related manifestations of hematopoietic toxicity. In general, alterations in other tissues were similar in morphology, incidence, and severity to those induced by clarithromycin alone.