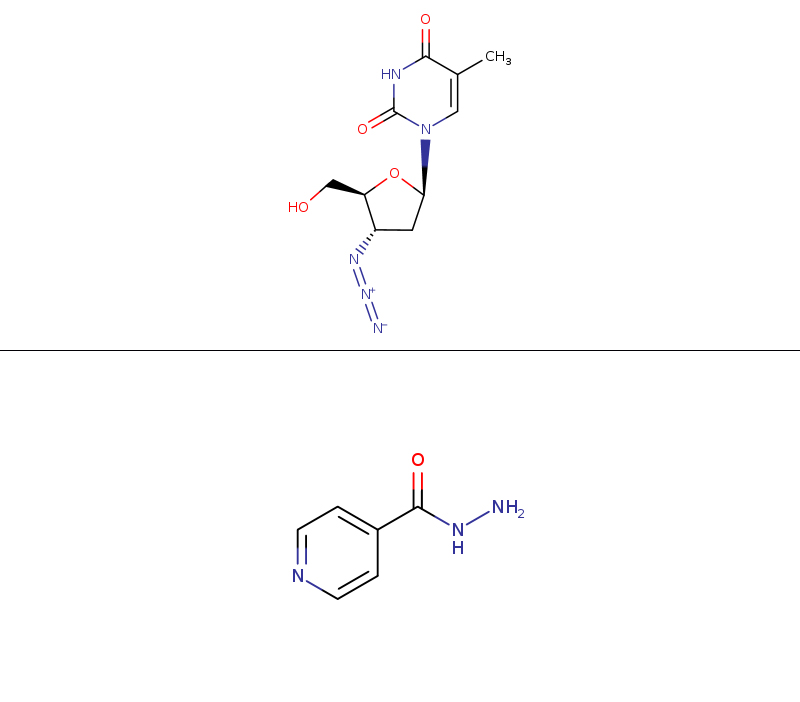 Male and female B6C3F1 mice were dosed orally with AZT alone (100, 200, or 400 mg AZT/kg body weight per day), isoniazid alone (50, 100, or 150 mg/kg per day), or combinations of AZT and isoniazid for up to 94 days. Mice were evaluated for clinical signs, mortality, body and organ weights, sperm function and vaginal cytology, and hematology and clinical chemistry parameters. Core study mice, early-death clinical pathology mice, and females from the 400 + 150 mg/kg (AZT + isoniazid) clinical pathology group were necropsied and subjected to histopathological evaluations.

The significant effects of treatment with AZT and isoniazid are summarized in the Abstract Table. The primary toxicity of AZT was bone marrow suppression. The hematopoietic toxicity was manifested by dose-related anemia, thrombocytosis, and a reticulocytopenia followed by reticulocytosis. Cellular depletion of the bone marrow was observed microscopically and was considered the major treatment-related effect. Increased pigmentation of the skin and a slight decline in epididymal sperm motility also occurred in mice treated with AZT alone.

Administration of isoniazid alone resulted in slight hepatotoxicity manifested by hepatocellular hypertrophy and pigment deposition in the liver of male mice. Treatment with isoniazid also resulted in a slight increase in the duration of estrus.

Administration of AZT in combination with isoniazid resulted in hematopoietic toxicity of greater severity than that resulting from the administration of AZT alone. The bone marrow suppression and anemia resulted in significant mortality in female mice treated with the highest combinations of AZT and isoniazid. Combination therapy also resulted in treatment-related declines in body weight, reticulocytopenia followed by reticulocytosis, thrombocytosis, leukopenia, neutropenia, lymphopenia, and a slight increase in the duration of estrus.