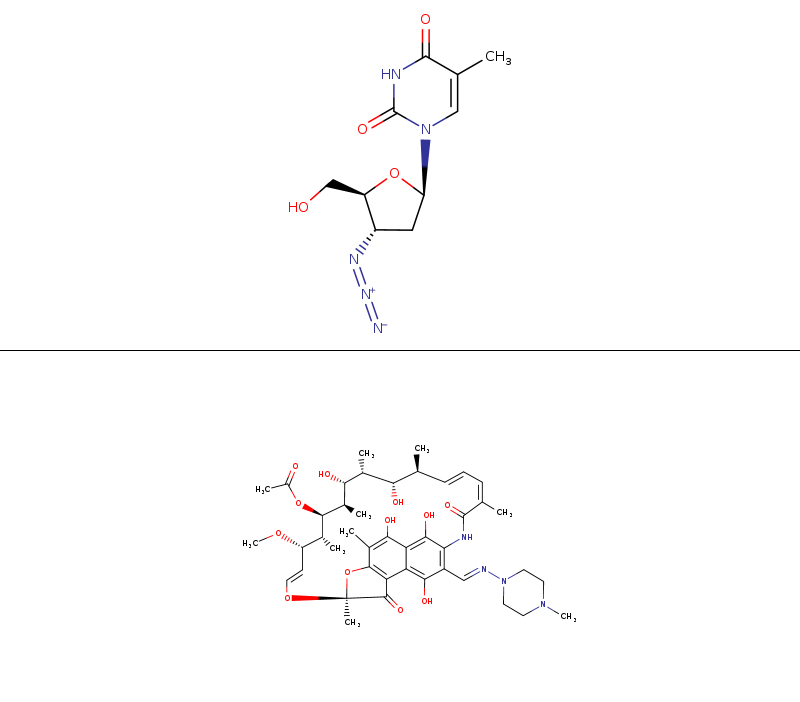 Male and female B6C3F1 mice were dosed orally with AZT alone (100, 200, or 400 mg/kg), rifampicin alone (100, 200, or 400 mg/kg), or combinations of AZT and rifampicin for up to 94 days. Mice were evaluated for clinical findings, mean body weight, hematology and clinical chemistry parameters, and sperm function and vaginal cytology. All core study animals and the clinical pathology study animals that died early were necropsied and subjected to histopathological evaluations. A summary of the most significant toxicological parameters is presented in Table 1.

The primary toxicity of AZT was bone marrow suppression manifested by macrocytic anemia, thrombocytosis, and reticulocytopema followed by reticulocytosis. Bone marrow atrophy was observed microscopically and was considered the major drug-related effect.

Administration of rifampicm alone resulted in both hematological toxicity and hepatotoxicity. Males and females developed a mild microcytic anemia and reticulocytope. Hepatotoxicity was manifested by increased liver enzymes in the serum, increased liver weights, and cytoplasmic vacuolization of hepatocytes.

Administration of AZT and rifampicm in combination resulted in hematological toxicity of far greater magnitude than that observed subsequent to the administration of either drug alone. Marked anemia and bone marrow atrophy contributed to significant mortality in groups treated with the higher concentration combinations. Females were more sensitive to the hematological toxicity of combination therapies than the males, and the female mice died earlier than the males.

Combination therapy with AZT and rifampicin did not exacerbate the hepatotoxicity induced by rifampicin alone. Serum enzyme levels, liver weights, and cytoplasmic vacuolization of hepatocytes were similar to those observed in mice treated with rifampicin alone.

Treatment-related decreases occurred in absolute thymus weights of mice treated with the higher concentration combinations of AZT and rifampicin, and the decreased thymus weights corresponded with thymic atrophy.