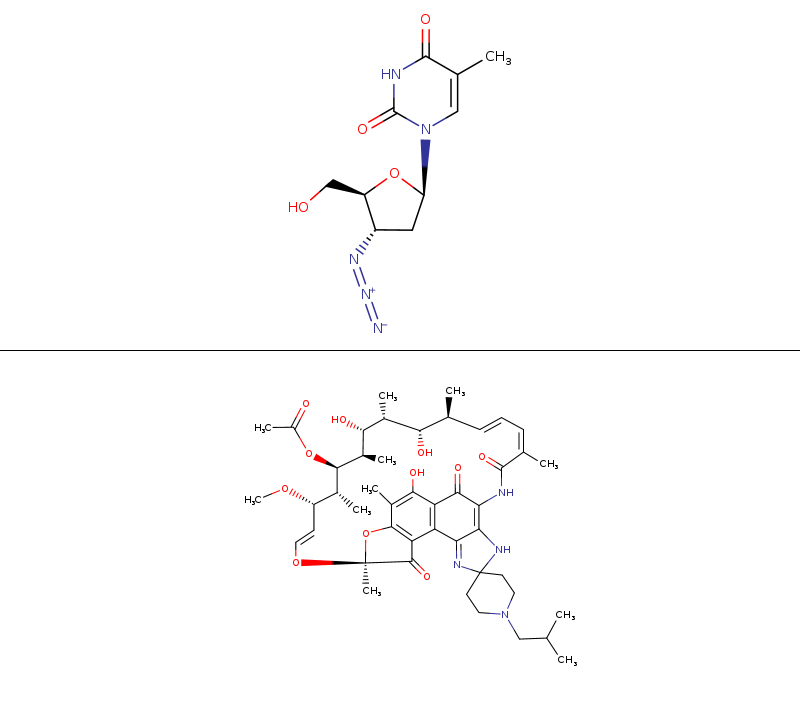 Individual toxicity profiles of AZT and rifabutin in animal models are available. AIDS patients, including pregnant women, may receive combination therapy with these compounds and the toxic potential of AZT and rifabutin combinations in animal models is not known. The purpose of this study was to obtain information on reproductive, developmental and general toxicity of AZT (200 and 400 mg/kg) and rifabutin (80, 320, or 640 mg/kg) combinations in Swiss (CD-1®) mice treated by oral gavage. The doses of AZT were equivalent to 2 and 4 times and the doses of rifabutin were 2, 8, and 16 times the human therapeutic dose, respectively (based on body surface area). Male mice(10 or 15 per group)were dosed from study day5 until the day prior to sacrifice on study day 24, 25, or 26. Females were divided into two groups designated female-A mice and female-B mice. The female-A mice (20 per group) were dosed from day 0 to sacrifice for approximately 30 days. They were cohabited with treated males on days 9 through 13 to test for effects on mating behavior, fertilization, and implantation, and caesarean sections were performed on days 28 through 32. The females designated as female-B mice (20 per group)were cohabited with untreated males on days 0 through 4. Sperm­ positive female-B mice were dosed during organogenesis on days 6 through 15 of presumed gestation and sacrificed on day 4 of lactation.

Summarized in Table 1 are the significant effects of treatment with AZT and/or rifabutin. Administration of AZT alone resulted in hematopoietic toxicity manifested by mild anemia, leukopenia, and thrombocytosis in male and female mice. In male mice, hematopoietic cell proliferation of the spleen accompanied the anemia.

Administration of rifabutin alone resulted in toxicity in the liver and in the hematopoietic and gastrointestinal systems. The mild anemia evident in male mice treated with rifabutin alone was accompanied by hematopoietic cell proliferation of the spleen and myeloid hyperplasia of bone marrow. A neutrophilic leukocytosis occurred in both males and females. Hepatotoxicity in male and female-A mice was manifested by cytoplasmic alteration and a mixed inflammatory cell infiltrate in the liver. Livers of female-B mice were not examined. The microscopic liver lesions in male and female-A mice were accompanied by elevated liver weights and elevated alanine aminotransferase (ALT), aspartate aminotransferase (AST), and bile acid concentrations. Lesions in the gastrointestinal system consisted of cystic degeneration and inflammation in the glandular stomach of male and female-A mice and epithelial hyperplasia of the forestomach in female-A mice. Mixed inflammatory cell infiltrates were occasionally evident in the lungs of males, and thymic atrophy also occurred in female-A mice treated with rifabutin alone.

Administration of AZT in combination with rifabutin resulted in severe hematotoxicity in male and female-A mice, and the severity of the anemia was far greater than that induced by AZT alone. The anemia caused significant mortality in female-A mice treated for approximately 30 days. The anemia in males was accompanied microscopically by cellular depletion of bone marrow and atrophy of the red pulp of the spleen. Thrombocytosis also occurred in male and female-A mice. A leukopenia with a corresponding decrease in neutrophil counts was evident in both males and in female-A groups in which mortality occurred. Combination therapy also exacerbated the hepatotoxicity induced by rifabutin alone. Mixed cell in filtration and cytoplasmic alteration in the liver of male and female-A mice were accompanied by centrilobular atrophy, which may have been secondary to the severe anemia. Increased ALT activities and elevated bile acid concentrations and liver weights accompanied the microscopic manifestations of liver toxicity. AZT at 400 mg/kg and rifabutin at 640 mg/kg when administered in combination appear to have increased the plasma levels of both compounds as compared to administration of either compound alone.

Degenerative and inflammatory lesions in the stomach of mice treated with the drug combinations were similar to those induced by rifabutin alone. Other lesions encountered consisted of thymic atrophy and atrophy of lymphoid tissue in the spleen and lymphnodes. Mixed inflammatory cell infiltrates in the lungs evident in the males were similar to the lung lesions in mice treated with rifabutin alone and were associated with a reddish-brown pigment that may have represented rifabutin or a metabolite. Mice treated with the drug combinations had significant decreases in body weight. Pallor was commonly observed in female-A mice that died with severe anemia. Other clinical manifestations of toxicity observed in female-A mice that received combination therapy and died consisted of piloerection, decreased motor activity, coldness to the touch, and labored breathing. Many mice treated with rifabutin alone or in combination with AZT developed a transient swelling of the face and had red-colored urine.