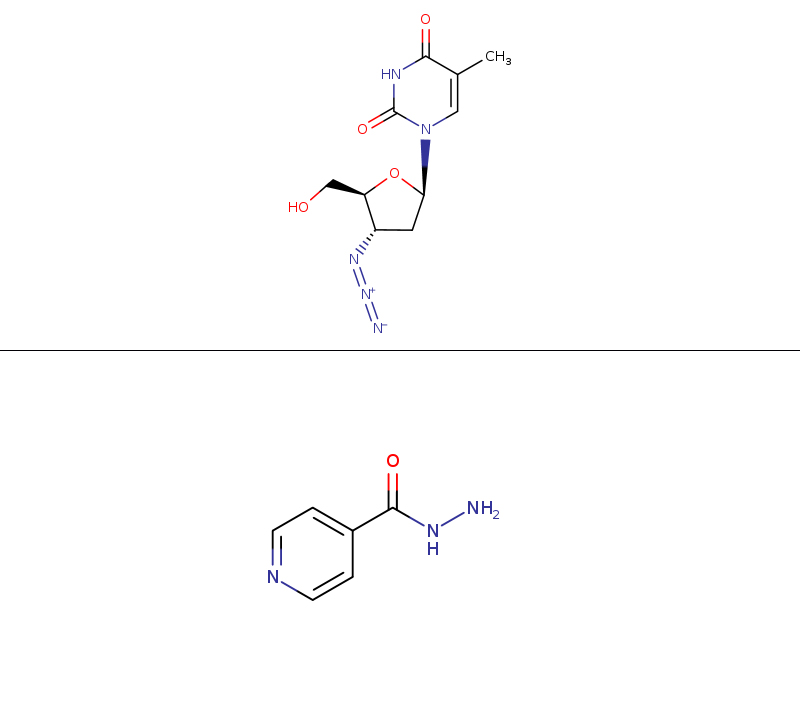 The toxicity of AZT and isoniazid combination therapy was assessed in Swiss (CD-1®) mice. Gavage doses of AZT (100, 200, or 400 mg/kg) were administered alone or in combination with isoniazid (50, 100, or 150 mg/kg). Male mice (10 per group) were dosed from day 5 until the day prior to sacrifice on day 25 or 26. Prior to dosing (days 0 to 4), the male mice were cohabited with a group of female mice (20 per group), hereafter referred to as female-B mice. The sperm-positive female-B mice were dosed on days 6 through 15 of gestation and sacrificed on scheduled day 4 of lactation. A second group of female mice (20 per group), hereafter referred to as female-A mice, were dosed from day 0 throughout mating on days 9 to 13 until sacrifice on day 18 of gestation. Adult mice were evaluated for clinical findings, mean body weights, and hematologic parameters. Offspring were evaluated for viability, external anomalies, and mean fetal weight.

Administration of isoniazid alone did not produce toxicity in male mice. The primary toxicity observed in male mice administered AZT alone or in combination with isoniazid was anemia. Coadministration of 400 mg/kg AZT + 150 mg/kg isoniazid exacerbated the anemia induced by AZT administered alone. AZT caused a minor decrease in epididymal sperm motility at 400 mg/kg. Isoniazid alone did not have a significant effect on epididymal sperm motility. A significant decrease in sperm motility was caused by 400 mg/kg AZT + 100 mg/kg isoniazid.

In female mice, hematologic, reproductive, and developmental toxicities were observed. In female-A mice, AZT administered alone induced anemia and leukopenia. Coadministration of 150 mg/kg isoniazid with any dose of AZT exacerbated the hematologic toxicity of AZT, with thrombocytosis being induced in addition to anemia and leukopenia. Other than the hematologic toxicity, 100 or 200 mg/kg AZT alone produced minimal, if any, maternal toxicity. The toxicity that was produced (decreased mean body weights and body weight gains) was probably related to the reduced litter sizes, increased resorptions, and reduced pup weights that occurred in these groups, as the mean body weights corrected for gravid uterine weights were not reduced in these two groups. Mice administered 400 mg/kg AZT had both maternal and developmental toxicity.

Isoniazid administered alone at doses as high as 150 mg/kg produced no maternal toxicity. Administration of 50, 100, or 150 mg/kg isoniazid alone produced some developmental toxicity: slight increases in the incidence of dams with any resorptions and percentage of dead or resorbed fetuses per litter.