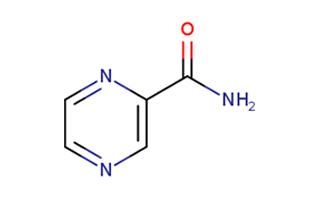 Pyrazinamide is a synthetic pyrazine analogue of nicotinamide used in the treatment of tuberculosis, which is an opportunistic infection in the human immunodeficiency virus (HIV)-positive population. The reproductive and developmental toxicities of pyrazinamide were evaluated in male and female Swiss (CD-1®) mice by administering daily doses of 0, 400, 800, or 1,200 mg/kg of pyrazinamide in 0.5% methyl cellulose in deionized water by gavage. Male mice (10 per group) were dosed on days 5 to 25 and sacrificed on day 25. Females were divided into two groups designated females-A and females-B. The females-A (20 per group) were dosed from day 0 to sacrifice and caesarean-sectioned on days 28 to 32 and were cohabited with dosed males on days 9 to 13 to test for effects on mating behavior, fertilization, and implantation. The females designated as females-B (20 per group) were cohabited with males on days 0 to 4, before the males began receiving pyrazinamide. Sperm-negative females-B were sacrificed after the cohabitation period; sperm-positive females-B were dosed during organogenesis on days 6 through 15 of presumed gestation. For females-B that delivered, both dams and pups were sacrificed on day 4 or 5 of lactation. Sperm-positive females-B that did not deliver pups were sacrificed on days 24 to 27 of presumed gestation. Adult mice were evaluated for clinical signs, body weights, pathologic findings at necropsy, and clinical pathology parameters. Sperm function was evaluated in males. From delivery until postnatal day 4, offspring from females-B were evaluated for viability, external anomalies, and body weight.

No apparent clinical, reproductive, or developmental toxicity was detected at the doses employed in this study. A reduction occurred in female fetal body weight in females-A in the 800 and 1,200 mg/kg groups. Since this reduction was not highly significant (P≤0.05) in the 1,200 mg/kg group, it is uncertain whether this finding is related to treatment with pyrazinamide. The highest dose administered in female Swiss (CD-1®) mice, 1,200 mg/kg per day, is approximately 8 times the therapeutic dose and resulted in a Cmax 9 to 12 times the Cmax caused by the therapeutic dose in humans. However, results of this study indicated that higher doses could have been tolerated.