There is now conclusive evidence that free radicals are a major cause of human diseases such as ionizing radiation, iron sulfate poisoning, oxygen toxicity in premature infants treated with hyperbaric oxygen, paraquat (herbicide) poisoning, ultraviolet radiation-induced cancer and carbon tetrachloride poisoning. Electron paramagnetic resonance (EPR), also known as electron spin resonance (ESR), is a sophisticated spectroscopic technique that detects free radicals in chemical and biological systems. This webpage is a resource for scientists studying the involvement of free radicals in pathological disease.

The Spin Trap Database (STDB) is a database of more than 10,000 records of published Spin Trapping experiments. This database includes the experimental results (e.g. hyperfine coupling constants) and journal reference information. STDB is a resource for scientists to aid in the identification of free radicals. 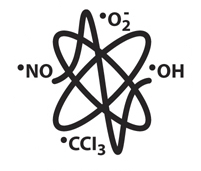 The Electron Spin Resonance Software Database (ESDB) consists of over 150 ESR related programs written for ESR spectroscopists. The ESDB includes software for data acquisition, spectral analysis and simulation collected by the computer committee of the International EPR Society. It is intended as a resource for those looking to use software in their own research. It is also a forum for discussion of software issues.

NIEHS has produced software for Electron Spin Resonance analysis since 1983. Originally, programs were written for the HP technical workstation that Varian supplied with their last spectrometers, but current programs are written for the IBM MS DOS, MS Windows, Win95, WinNT and various UNIX workstation formats. This software is provided free of charge to the ESR research community with the understanding that any resulting reports, either internally or externally distributed, explicitly acknowledge this contribution.

You found this resource. NIEHS has several other great resources to help scientists with their research.