As the climate continues to change, existing health threats may worsen while new public health challenges emerge. A recent study by the Union of Concerned Scientists reported that more than 800 hazardous Superfund sites near the Atlantic and Gulf coasts are at risk of flooding in the next 20 years, even with low rates of sea level rise. According to the study, these sites often exist near communities of color and those with lower incomes, who are likely to be disproportionately affected as climate change puts Superfund sites at risk.

Contaminant movement and effects on exposure TAMU researchers also collected samples near the San Jacinto Estuary in Texas and found that Hurricane Harvey eroded sediment contaminated with mercury, resulting in at least two tons of mercury being released into Galveston Bay.

In related work, the TAMU and Baylor College of Medicine SRP centers collaborated to collect personal exposure data after the hurricane. The team deployed silicone wristbands created by scientists at the Oregon State University SRP Center to measure the chemicals people were exposed to.

Duke University SRP Center investigators joined forces with former trainee and 2002 Wetterhahn Award winner Elena Craft, of the Environmental Defense Fund, to test for contaminants after Hurricane Florence made landfall in North Carolina and South Carolina in 2018. The team used cutting-edge tools created by SRP-funded small businesses Entanglement Technologies and Picoyune. They conducted nontargeted analysis on the samples, an approach to look for and measure multiple chemicals.

Researchers at the Northeastern University SRP Center found differences in drinking water contamination before and after Hurricane Maria hit Puerto Rico in 2017. The team analyzed for over 200 trace contaminants and found higher concentrations of arsenic, per- and polyfluoroalkyl substances (PFAS), and pesticides, among others, in samples collected post-hurricane.

Dartmouth College SRP Center scientists performed laboratory and field experiments with fish on mercury accumulation under varying temperatures, which were consistent with predicted trends in climate warming. They found that when water temperatures rose, the fish under study ate more, and they absorbed higher levels of toxic metals such as mercury. Their findings show that human exposure to mercury from fish consumption may increase with warming waters.

SRP-funded researchers at the University of Miami partnered with residents of Guanico Bay, Puerto Rico, to examine how Hurricane Maria redistributed polychlorinated biphenyls (PCBs) in and around the bay. They also looked at changes in community members’ exposure to PCBs through inhalation and consumption of contaminated seafood and fish and explored health effects. Kumar and partners worked to increase awareness of PCB contamination and strategies to reduce exposure, such as removing fatty tissues from seafood and fish and exercising, documented. 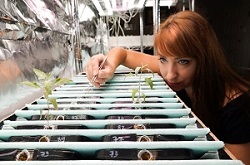 At the University of Arizona SRP Center, researchers found that increasing temperatures and drought in desert ecosystems may decrease vegetation and microbial density, which could negatively impact ecosystem sustainability. The team is exploring how to promote vegetation covering at hazardous mine sites in these arid environments. Through this project, they hope to stabilize mining wastes and prevent the transport of contaminants through wind-blown dust or groundwater into surrounding areas. 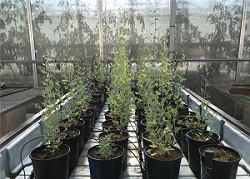 In related work, the University of Arizona and UC San Diego SRP Centers collaborated to develop genetically engineered plants that are drought resistant and can grow in semi-arid environments. They also study how plants interact with microbes and metals in contaminated soils to improve their plants’ ability to take up metals from mine waste sites. This project was facilitated by a 2018 K.C. Donnelly Award to University or Arizona SRP trainee Priyanka Kushawa.

UC San Diego SRP Center researchers collaborated with scientists from the Dartmouth SRP Center to identify transporters in plants that can increase the uptake of water and nutrients in soil. Using these transporters in breeding research could lead to improved salt and drought tolerance for crops.

Investigators at the UC Berkeley SRP Center developed a new strategy to treat contaminated urban stormwater by coating sand with manganese oxide to effectively degrade contaminants. According to the researchers, their approach works over longer periods of time and is more cost-effective than regular stormwater treatment systems.

Researchers from the Northeastern University SRP Center continue to investigate the effects of Hurricane Maria on health in Puerto Rico. For example, they found pregnant women had higher levels of phthalates commonly found in food packaging after the hurricane. According to the team, changes in chemical exposures and stress, widespread structural damage, food and water shortages, and lack of electricity and cell phone service may all play a role in increasing the risk of adverse birth outcomes among this already vulnerable population.

The Northeastern SRP Center team also evaluated the impacts of hurricanes Irma and Maria on conducting children's health research in Puerto Rico. Their findings shed light on the need to integrate disaster preparedness into research programs to promote resilience among staff, health partners, and participants. 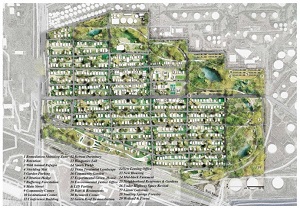 Researchers at the TAMU SRP Center are exploring ways to use urban planning and citizen science to make Houston communities more resilient to frequent flooding, air pollution, and health concerns. For example, they worked with communities in the greater Houston area to develop a master plan to install green infrastructure features, such as water-absorbing rain gardens on vacant lands. They also partnered with local organizations, stakeholders, and residents to develop a community-scaled master plan for Manchester, Texas. The plan, which utilizes land use and built environment changes to increase flood resiliency and decrease exposure to contaminants, is projected to capture 147,456 cubic feet of runoff and create other benefits.

TAMU SRP Center scientists also developed an edible clay-based sorbent that can be added to food and water to reduce harmful effects resulting from exposure to metals and pesticides following natural disasters, chemical spills, and other emergencies.

A trainee with the University of Arizona SRP Center is studying how to increase community resiliency to climate change and environmental pollution using environmental measurements, local knowledge, and remote sensing data along with geographic information system (GIS) tools.

To help people prepare for extreme weather events, such as hurricanes and floods, the Boston University (BU) SRP Center presented a webinar series that explored disaster preparedness and mitigation before, during, and after a storm. The webinar series included strategies to protect against toxic exposures in air, water, and soil, and safe approaches for cleaning up contaminated environments. The team also presented a separate webinar on community prevention plans and policies that can help protect human and environmental health in the face of climate disasters.

Researchers at the University of Arizona SRP Center hosted a webinar series and compiled scientific articles for a special issue journal focused on water research led by Indigenous scientists in Tribal communities affected by mining. The special issue, titled Water in the Native World, included an article co-authored by an SRP trainee describing the impacts of climate change on Tribal water resources and community health. 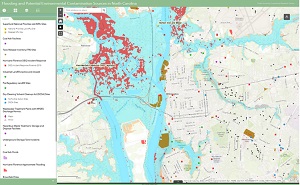 Duke’s mapping tool raises awareness about chemical contaminants that may enter environment during a flood and can inform decisions to prevent potential harmful exposures. (Photo courtesy of the Duke University SRP Center)

In the aftermath of Hurricane Florence, Duke University SRP Center researchers collaborated with the North Carolina State University Extension to create a website with resources to manage the impact of floodwater after extreme weather events. The website includes a mapping tool showing potential sources of contamination in North Carolina, and factsheets and handbooks with actions gardeners can take to reduce health risks from contaminated floodwaters.

Researchers at the TAMU SRP Center collaborated with the Environmental Defense Fund to develop the HGBEnviroScreen, an interactive map to help communities understand environmental risk factors and identify and prioritize regions of heightened vulnerability. The tool integrates and visualizes data including social vulnerability, baseline health, environmental exposures and risks, environmental sources, and flooding.

The TAMU and UC San Diego SRP Centers collaborated developed an online interactive dashboard, called the Toxics Mobility Vulnerability Index. The dashboard presents interactive maps and charts showing how land use, such as impervious surfaces and green space, affects people’s exposure to harmful chemicals and community resilience and health. The tool can be used in the context of climate change since it identifies factors that contribute to flood risk, allowing decision makers to identify solutions to mitigate exposures resulting from climate change related events, such as sea level rise.

California’s Drinking Water Tool helps communities and decision makers identify areas where water quality may be of concern across the state. (Photo courtesy of the UC Berkeley SRP Center)

UC Berkeley SRP Center scientists partnered with a community-based organization to develop California's Drinking Water Tool, an interactive website that provides communities information about groundwater challenges that could affect their access to safe and affordable drinking water. The tool helped identify communities in California where households rely on private, unregulated groundwater wells for water. Contamination from sources such as airports, military sites, and landfills, and natural events like sustained droughts can affect these unregulated wells.