Understanding individual variability is important to understanding why, after being exposed to environmental chemicals, some people are affected and some are not. NIEHS-funded Superfund Research Program (SRP) scientists and engineers study the mechanisms involved in the body's response to environmental stressors. Insight into biological differences and how people may be affected by environmental pollutants can improve public health decision making. At the Oregon State University (OSU) SRP Center, researchers are characterizing how human bodies process polycyclic aromatic hydrocarbons (PAHs). Focusing on a PAH called benzo[a]pyrene (BaP), they developed a method to track the movement of extremely small amounts of these potential carcinogens through the body as they are biologically processed and eliminated. While they found little variation in BaP metabolites in the same person over time, they did see marked differences in metabolites between some individuals. According to the authors, these findings may be used to further evaluate and predict the health effects of PAH exposures in different populations.

Columbia University SRP grantees identified DNA differences that influence vulnerability to arsenic-induced skin lesions. Skin lesions are an early hallmark of toxicity resulting from chronic arsenic exposure, generally through drinking contaminated water. The researchers showed that deletions or duplications of long stretches of DNA, also known as copy number variations, that occur in several gene locations are associated with a higher risk of developing arsenic-induced skin lesions. Their findings may help explain why some people exposed to arsenic develop skin lesions while others exposed to the same levels do not.

Grantees at the Massachusetts Institute of Technology (MIT) SRP Center are assessing the effects of PAH mixtures at different concentrations for different periods of time through studies in cells. The researchers are exposing cells to PAHs, then assessing individual molecular effects like DNA damage and changes to proteins. They are also mapping these effects to molecular networks in the body. By comparing these effects in cells with different genetic backgrounds, the group hopes to better understand genetic susceptibility. Zebrafish were exposed to the chemical abamectin and then evaluated for developmental differences. The DNA of affected fish was compared to the DNA of unaffected fish to identify differences that may affect susceptibility. (Image from Balik-Meisner et al. Environ Health Perspect)

In other efforts, OSU SRP grantees are combining data from zebrafish studies to identify interactions between genes and the environment associated with differences in susceptibility to chemical exposures. They found genetic variations within zebrafish populations play a significant role in differences in response to chemical exposures. According to the researchers, their bioinformatics approach may more broadly identify candidate chemicals that may be harmful to susceptible individuals. Thus, they can more accurately represent the diversity of chemicals people may encounter in the environment.

Traditional animal models often do not include genetic diversity, limiting their ability to account for differences in susceptibility. SRP grantees at the Texas A&M University (TAMU) SRP Center showed how the Collaborative Cross (CC) mouse model, which uses genetically diverse mice to capture over 90% of known genetic variations, can account for individual differences in susceptibility to environmental chemicals. The researchers measured variability in kidney toxicity and metabolism in CC mice after exposing them to tetrachloroethylene. When comparing the results of this study to the default values generally used in human health risk assessments to adjust for population variation, they found that the default values may be marginally adequate to protect 95% of the population but may not protect the most sensitive individuals.

The TAMU SRP Center researchers also developed a population-based model in cells to look at variability in potential cardiovascular effects from exposure to chemicals. Using heart stem cells from 43 individuals, comprising both sexes and diverse ancestry, researchers screened 134 chemicals for potential cardiovascular toxicity. They showed that cardiotoxicity hazard varied among individuals across a wide range of drugs and some environmental chemicals. 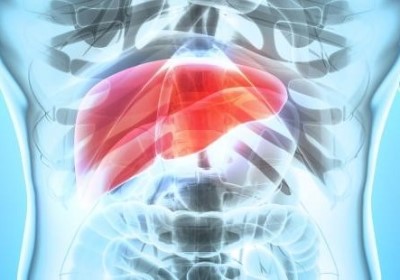 The UCSD SRP Center focuses on understanding the mechanisms associated with toxicant-induced liver disease, including why some people are more susceptible than others.
(Photo courtesy of the UCSD SRP Center)

SRP grantees are also studying population differences in how environmental chemicals affect specific organs, such as the liver. For example, University of California San Diego (UCSD) SRP Center researchers found that elements of the gut microbiome can prevent harmful scar tissue in the liver after exposure to chemicals that can lead to chronic liver injury. They found that mice raised without certain microorganisms in their gut were more susceptible to liver injury and scarring from the chemical carbon tetrachloride. They have since identified factors that can lead to an altered gut microbiome that may contribute to liver injury and disease, including appetite, energy expenditure, digestion, intestinal permeability, and immune activation.

SRP researchers at the University of Iowa are identifying differences in how people metabolize polychlorinated biphenyls (PCBs) by examining how PCBs are distributed, metabolized, and excreted. In mice, they studied how the liver-specific deletion of the cytochrome P450 reductase gene altered effects from a specific PCB and found genetic and sex differences in PCB metabolism.

University of Louisville SRP Center researchers found that in response to PCB exposure, female mice demonstrated higher liver injury and more pronounced changes in energy metabolism compared to male mice. According to the authors, the findings demonstrate that females may be more susceptible to the effects of PCBs on the liver. Sex differences in environmental exposure-induced liver injury warrant further investigation. They also found that PCBs may compromise the liver by reducing its protective responses against nutritional stress, such as a high fat diet, which can promote diet-induced liver injury.

UW SRP Center researchers study the cellular and molecular mechanisms that lead to changes in the brain in response to environmental chemicals and how that may affect learning and memory.
(Photo courtesy of the UW SRP Center)

To study how biological differences can lead to neurotoxic effects, University of Washington (UW) SRP Center scientists developed a test that measures paraoxonase-1 (PON1). This test determines how rapidly an individual will metabolize organophosphorus (OP) insecticides, which are neurodevelopmental toxicants. The researchers developed methods to measure PON1 activity levels as a biological marker of susceptibility to help identify mothers and children who are highly sensitive to OPs. UW SRP Center researchers are also looking at individual susceptibility with zebrafish and found genetic differences that lead to changes in neurobehavioral function upon exposure to copper.

At Duke University, scientists found that exposures to low concentrations of flame retardants during development led to lifelong behavioral changes in zebrafish. They are now studying the mechanisms behind these neurotoxic risks to explore what zebrafish can tell us about potential effects on humans and differences that may make some individuals more susceptible.