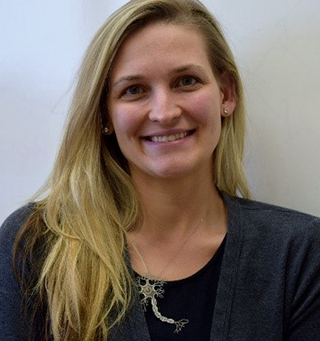 Marissa Sobolewski, Ph.D., an assistant professor and toxicologist at the University of Rochester Medical Center (URMC), studies how chemicals can disrupt the endocrine system and affect behavior. According to Sobolewski, the URMC Environmental Health Sciences Center (EHSC) has been influential in her transition into the field of environmental health science and in helping her establish her own lab and independent research program.

Sobolewski started her research career in the field of evolutionary anthropology. During her doctoral research she studied wild chimpanzees in the forest of Uganda, tracking the relationship between the males’ fluctuating hormone concentrations and their behavior.

After earning her Ph.D. from the University of Michigan, Sobolewski’s research interests shifted towards environmental toxicology, and she began studying the impact of chemicals on the endocrine system and behavior. With the help of the Center’s Deputy Director, Deborah Cory-Slechta, Ph.D., a well-known researcher in the field of developmental neurotoxicology, Sobolewski began establishing roots in the environmental health research community. She was soon awarded a postdoctoral position within the Center supported by a training grant from NIEHS. “I can attribute my entire research career in toxicology to the URMC Core Center and training grant from NIEHS,” she said. This grant allowed Sobolewski to train with Center researchers to study the effects of chemicals and stress on behavior in mice models. 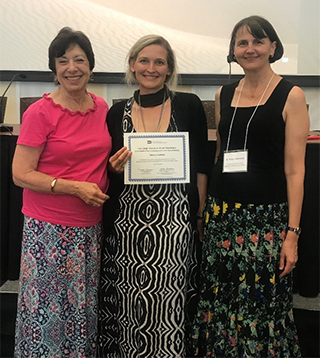 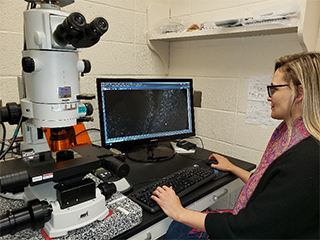 In collaboration with her mentors, Cory-Slechta and Center Director Paige Lawrence, Ph.D., Sobolewski received pilot project funding from the Center to examine how developmental exposure to mixtures of endocrine disrupting chemicals (EDCs) affects neurobehavioral outcomes in mice. EDCs may alter hormonal function and have been linked to behavioral disorders, such as attention deficit hyperactivity disorder (ADHD) and autism. She found that male mice were more affected by the EDC mixtures than female mice.

Working with Martha Susiarjo, Ph.D., director of the EHSC Epigenetics Core, Sobolewski has expanded her research to examine how disruption of testosterone levels in early life alters DNA methylation patterns. DNA methylation involves the binding of a chemical compound called a methyl group to the DNA, which can make genes more or less active in their role of making proteins.

Following her postdoctoral training, Sobolewski joined the Center as a full member and was hired as a tenure track assistant professor at URMC. She will continue building on this research to investigate how chemical exposures may disrupt testosterone levels in early life, leading to lifelong changes in brain structure and behavior.

“One of the most exciting aspects of toxicology is that we get to do basic science and applied science at the same time — we are discovering the basic biology of how brain development is different for males and females, and at the same time we are uncovering sex-specific susceptibly to EDCs,” she said. “Having people with different points of view is critical to making scientific discoveries and the Center brings these different points of view together to tackle complex and critical public health issues.”