The Superfund Research Program (SRP) regularly highlights basic and applied research and activities from the program that span multiple disciplines. 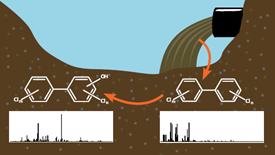 The University of Iowa researcher measured PCB breakdown products in sites that were contaminated with PCB mixtures decades ago. (Image courtesy of Saktrakulkla et al. 2022)

Study Sheds Light on Breakdown Products of PCBs in the Environment

A protein called fibrinogen can be an indicator of cadmium exposure in people with chronic obstructive pulmonary disease, according to a study led by Veena Antony, M.D., director of the University of Alabama, Birmingham SRP Center.

SRP-funded researchers, led by Heileen Hsu-Kim, Ph.D., of the Duke University SRP Center, showed that a small plastic sampling device can efficiently predict the potential for methylmercury — an environmental contaminant — to form in freshwater wetlands and to accumulate in organisms living there.

Prenatal exposure to chemical mixtures worsens working memory in adolescents, according to NIEHS-funded researchers at the Harvard SRP Center. 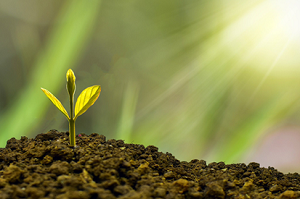 The Progress in Research webinars demonstrated how materials science can improve the applicability of bioremediation. (Image courtesy of Nature_Design / Pixabay.com)

Materials science and bacteria are key to remediation, experts say

During recent SRP Progress in Research webinars, grantees discussed innovative strategies for bioremediation — the process of using bacteria, fungi, and plants to break down contaminants.

Extramural Paper of the Month: Link between placenta and fetal brain may predict neurodevelopment disorders

In mice, prenatal exposure to polychlorinated biphenyls altered DNA methylation in both the placenta and fetal brain in a manner consistent with neurodevelopmental disorders. DNA methylation is a molecular mechanism that regulates the function and expression of genes. The study was funded in part through the University of Iowa SRP Center.

Extramural Paper of the Month: Tropical cyclones linked to rise in U.S. deaths

Throughout 50 years of publishing cutting-edge research and news, Environmental Health Perspectives has evolved to keep up with the times. SRP grantees have contributed substantially to the journal over the years. To celebrate this milestone, SRP shared some SRP-funded studies published in the journal over the years on Twitter, @SRP_NIEHS. Follow #EHP50 on twitter to join the conversation. 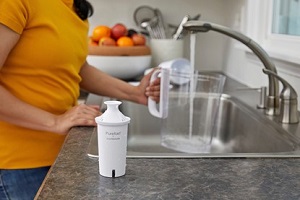 SRP-funded small business CycloPure, Inc., developed a new filter cartridge compatible with Brita pitchers that can remove per- and polyfluoroalkyl substances (PFAS) from drinking water. The Purefast cartridges are based on CycloPure’s DEXSORB+ technology, which uses renewable cup-shaped cyclodextrins, derived from corn starch, to bind and remove all 40 PFAS targeted in the U.S. Environmental Protection Agency PFAS Roadmap.

Extramural Paper of the Month: Pine Needles Work as Passive Samplers for PFAS

North Carolina State University SRP Center researchers showed that pine needles can be used as a tool to monitor the presence and distribution of PFAS over time. The pine needle’s waxy coating traps pollutants in air, including PFAS, providing a record of contamination. More than 70 different PFAS were identified in the pine needles. The types of PFAS detected in samples correlated with known changes in PFAS use over time.

Long-term exposure to polychlorinated biphenyl (PCB) mixtures characteristic of school air may affect the nervous and immune systems, according to an SRP-funded study in rats. Led by researchers at the University of Iowa SRP Center, the study shows that 45.5 micrograms per cubic meter may be close to the lowest dose in which airborne PCB exposure induces adverse health effects.