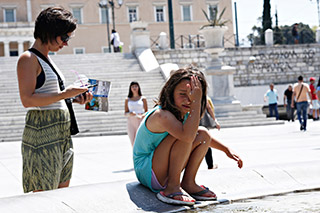 Over long periods of time, individuals and communities can adapt to their local climates. When both warmer and colder temperatures go above or below those norms rapidly, scientific evidence shows that people become vulnerable to associated health effects related to those extremes. Studies suggest that climate change will greatly increase the severity and frequency of extreme temperature conditions, leading to increases in temperature-related illness and death 1 .

Climate change can also contribute to extreme cold weather events. When warm air destabilizes the polar vortex that circulates cold air at Earth’s poles, the cold air can be released toward the equator. Health effects from extreme cold can include cardiovascular stresses as the body struggles to retain heat and can cause illness such as hypothermia. Vulnerability to cold weather events depends on many non-climate factors, such as the built environment and an individual’s age or health status. 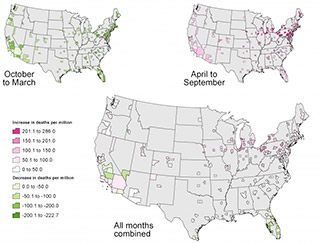 While current research indicates that most people can adapt biologically and physically to incremental increases in average normal temperatures, children, pregnant women, and older adults are more susceptible to adverse effects because they are less able to regulate their body temperatures 3 . Other at-risk groups include individuals working outdoors, outdoor athletes, the socially isolated and those with incomes below the federal poverty level, as well as communities of color. Continuous exposure to increased heat over time will impact how individuals are able to work and play both now and in the future.

An individual’s geography plays a large part in their vulnerability to temperature extremes. For instance, those living in densely populated cities are more likely to be impacted by urban heat island effect, where manmade surfaces absorb sunlight during the day and then radiate the stored energy at night as heat 4 . The health outcomes of temperature extremes are closely related and, in some cases, interdependent on other factors, such as air quality, infrastructure, demography, and mental health status. These can create additional comorbidities that compounds the effect of disease or injury.

Environmental changes to the built environment can be effective protective measures for human health and against the effects of climate change. Green spaces and new technologies such as cool roofs can offer benefits in urban settings. Adaptation measures, such as increased access to air conditioning or cooling centers, can safeguard communities from the health impacts of extreme heat. Similarly, access to central heating can protect individuals from extreme cold. Additional examples include adding sound landscape design such as planting trees to shade public spaces and offer healthy exercise areas. These actions are also beneficial in that they help to reduce greenhouse gases.

Research and research translation are critical to further understanding the effects of temperature change on human health. In addition, research on early warning systems or heat wave response plans can help prepare individuals, workers, and communities. For example, temperature data are determined based on weather station records; however, actual exposure of individuals depends on their location. This can be influenced by urban heat islands, microclimates, and differences between indoor and outdoor temperatures. New technologies and research are addressing the need to better assess these differences in exposure and heat index.

Further research activities will continue to explore the following: the relationship between exposure to extreme high and low temperatures with human illness and mortality, along with the combination of other climate-stressors; an improved understanding of social determinants that contribute to vulnerability; and an assessment of future adaptive measures.