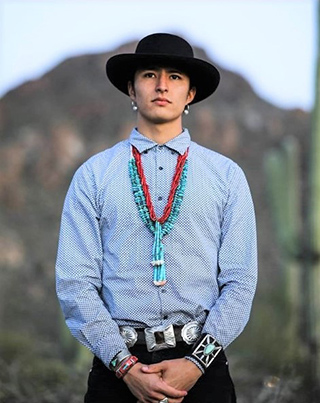 NIEHS has long supported grantees who work on community-engaged research, environmental education, and tribal issues. Cheyenne Grabiec, an enrolled member of the Navajo Nation, has combined all of these elements early in his career, working on NIEHS-supported environmental health projects at the University of Arizona (UA), first as an undergraduate intern and now as a program coordinator.

While an undergraduate student, Grabiec saw IngriQue Salt, a UA tribal liaison, talk about the Environmental Health Sciences Transformative Research Undergraduate Experience (EHS-TRUE) internship program. Cheyenne says that while he never saw himself working in the field of environmental health, he drew a connection between the state of the environment back home on the Navajo Nation and mental health, so he decided to apply to the program. Later, as an intern in that program, he worked under NIEHS-funded researcher Marti Lindsey, Ph.D., head of the Southwest Environmental Health Sciences Center’s Community Engagement Core. Grabiec planned and managed outreach events with tribal communities to address their environmental health concerns – asthma and air quality were major topics of interest. He also coordinated science cafes, community-based events where scientists hold discussions with community members and where youth are given the opportunity to engage in hands on-activities to learn more about environmental health sciences. He also was on an intertribal team that developed the 2019 Tribal Forum, where tribal leaders and professionals discussed environmental health issues with UA faculty and grad students. 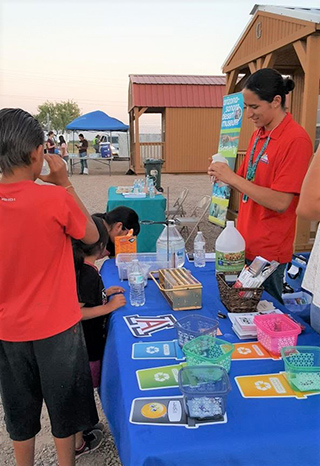 As one outcome of his internship, Grabiec led the development of an Indigenous Inquiry Framework, which guides investigators in designing and implementing projects in collaboration with tribal partners that respect tribal self-determination and put indigenous cultures, traditions, and epistemologies at the center of research. The idea stemmed from his work with researchers who had little to no experience collaborating with tribal communities and seeing their need for a framework for engaging in respectful project development with tribal partners. The framework is being used by interns working on tribal-related projects to assure strong collaboration and a focus on the needs of tribal partners. Lindsey says, “I am very impressed with his ability to translate the collaborative engagement model into a framework for indigenous research practice.”

After graduating in December 2018, Grabiec served as the managing editor of the fourth volume of Indigenous Stewards, a magazine that focuses on the connection between indigenous communities and environmental health. He collaborated with the magazine’s advisory board, assigned articles, and put together the final product, which is broadly disseminated at tribal events and activities and which is an official publication of the University of Arizona. “He has a strong vision of what the magazine can accomplish and how to meld different ideas into a publication I am proud of,” said Lindsey.

In the summers of 2018 and 2019, he participated in Diné College’s Summer Research Enhancement Program, a public health internship in which he served as a teaching assistant and conducted in-depth research on childhood asthma on the Navajo Nation through an NIH-funded UA project.

Grabiec has now returned to the University of Arizona as a program coordinator under Dr. Lindsey. He is working on an air quality and asthma project with a tribe in the Southwest to measure the rate of childhood asthma. According to Grabiec, preliminary data put the asthma rate at 24% – more than double Arizona’s statewide average. The project is now trying to reach more of the tribe’s youth to conduct additional screening and to provide air-quality education.

Grabiec envisions a future in law and tribal government. He is currently enrolled as a master’s student in indigenous peoples law and plans to apply to a J.D. program. Afterwards, he would like to return to the Navajo Nation and put his legal skills to use, perhaps working in the Nation’s Peacemaking Program, an alternative to Anglo-American jurisprudence that relies on restorative justice and traditional Diné wisdom and practices.