Tommy Rock, a doctoral student at Northern Arizona University, grew up in a small community on the Navajo reservation, where he saw firsthand the effects of uranium mining on his relatives. Navajo lands were mined heavily for uranium from 1944 to 1986, leaving more than 500 abandoned uranium mine sites and elevated levels of radiation in homes and drinking water sources.

“My grandfather was a former uranium mine worker who died from cancer about ten years ago,” said Rock. “I wanted to do something about this problem of uranium contamination, and as I learned more and became involved in research, I realized more communities across the Navajo Nation were also affected.”

Last year, Rock helped discover more than a decade of uranium contamination in the drinking water of the small community of Sanders in eastern Arizona. Sanders lies just outside of the Navajo reservation, and about 80 percent of the community is Navajo.

Uranium in the water supply 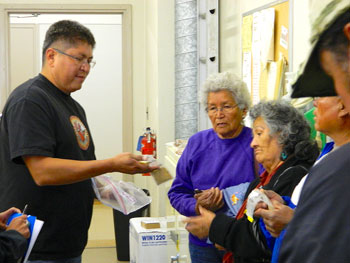 Through his work with the Northern Arizona University Center for American Indian Resilience (CAIR), Rock shows community members from Cameron, Arizona, how environmental samples are processed in the lab.
(Photo courtesy of CAIR)

Rock discovered the contamination while working on a project funded by an EPA Environmental Justice Grant. The project involved testing unregulated wells along the Puerco River, a tributary of the Little Colorado River that flows through Sanders. Rock and his colleagues organized a two-day training for the community and hired community workers to conduct the water testing.

"When conducting this training, one of the community members asked us to sample the public water supply,” said Rock. “We did this, and found elevated levels of uranium in the wells along the river as well as in the pubic water sources."

The results, which came back in June of 2015, showed uranium levels at 43 parts per billion, well above the EPA limit of 30 parts per billion. Exposure to uranium in drinking water can lead to bone cancer and impaired kidney function. When Rock and his colleagues looked deeper to figure out how long the contamination had been taking place, they found records indicating elevated levels of uranium as far back as 2003. All the tests from 2009 to 2015 showed elevated levels of uranium in the public water.

“The sad thing was that the community members were not notified about the contamination by the state or the Arizona Windsong Water Company, which supplied the water,” said Rock. “The water company violated the federal Safe Water Drinking Act by not giving reports to their customers.”

The researchers presented their findings at several community meetings, and while people stopped using the public water, they were not seeing any movement by the state or water company to fix the contamination. During one of these meetings, community members asked the researchers to test the well that supplies water to the elementary and middle schools. “We found elevated uranium in this water supply as well,” said Rock. “The school district shut off water fountains in the schools and started hauling in water from another town.” 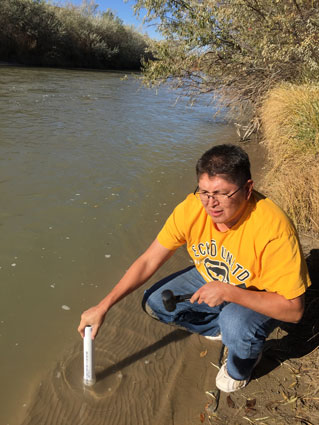 Rock worked with Karletta Chief, Ph.D., from the University of Arizona to gather water and sediment samples after the Gold King Mine Spill, which affected many Navajo communities.
(Photo courtesy of Karletta Chief)

It was not until after media coverage of the contamination in April 2016 that the people of Sanders finally saw actions aimed at fixing the problem. After Windsong’s license was not renewed, the new company handling the Sander’s public water system replaced the well that supplies the public water. While some people are using the new water, the entire water system still needs to be upgraded since the water infrastructure is old in the community of Sanders and cannot handle the full pressure from the new waterline.

Although the state isn’t required to notify people of contamination, the Arizona Department of Environmental Quality has changed its policy and will now issue public notices for drinking water violations if the public water system neglects to do so. “I like to think that we helped change this policy,” said Rock. “I am also glad to know I played a part in helping the community of Sanders have better water now than they did before.”

Rock continues to work on his dissertation research, which is examining uranium exposure and bioaccumulation in sheep living around mining sites on Navajo land. By understanding how this traditional indigenous food source accumulates uranium, Rock hopes to develop safe consumption recommendations for tribal members in mining-affected areas. This research project is led by Jani Ingram, Ph.D., of Northern Arizona University, who is funded by the NIEHS through the Native American Research Centers for Health.

After completing his doctoral degree, Rock would like to use his knowledge and experience to help people in other parts of the world. “One day I would like to work for the World Health Organization, so I could help indigenous populations throughout the world find solutions to their contamination problems.”