Elizabeth Yeampierre, executive director of UPROSE, is passionate about community advocacy, and her personal experiences have played a major role in guiding her career path. Born and raised in an environmental justice community in New York City, Yeampierre witnessed first-hand the health disparities present in her own life and the lives of family members. As a former civil rights attorney, she is an expert at addressing economic and social justice issues. “Although I was the first person in my family to graduate from college, I didn’t want to use my education to make money – I wanted to make change,” Yeampierre stated. “This had a lot to do with how I was raised to appreciate the values of community and to understand the historical sacrifices made by my African and Indigenous ancestors, who were descendants of colonization and slavery.”

UPROSE is a nationally recognized organization that promotes the sustainability of Sunset Park – an ethnically and economically diverse neighborhood in Brooklyn – by empowering younger generations, enhancing environmental amenities, and addressing social inequities. Although it was incorporated as a grassroots organization for Brooklyn’s Latino community in 1966, major changes took place when Yeampierre joined in 1996 – her leadership served as a catalyst to shift the organization’s mission toward advocacy and developing indigenous leadership through activism.

Getting Started: Youth Empowerment and Advocacy for Environmental Justice

Shortly after taking on the role of executive director in 1996, Yeampierre led an assessment to determine what UPROSE could do to complement what other organizations were already doing in the community. “We wanted to think strategically about how to best use our resources and skills to make the community stronger,” she said.

Observations from the assessment led to the establishment of a new model of youth development through organizing. This model sought to empower youth by offering them resources and skills and encouraging them to be proactive about their education. UPROSE became filled with young people of different ages and backgrounds who were eager to serve as leaders and advocates for their community. “In the process of youth transforming the community, they were transforming, as well,” Yeampierre mentioned. 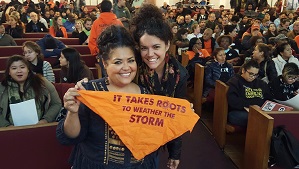 UPROSE’s mission flourished as Yeampierre began working with youth to fight against the disproportionate environmental burdens in the Sunset Park community. One of their first projects involved organizing a town hall meeting on lead paint, where different experts – teachers, doctors, and lawyers – were invited to help parents understand their rights and to address the effects of lead paint on their children’s health. As a result of the meeting, city council members were encouraged to pass legislation that would require removal of lead paint from homes. Other early projects included campaigns to address air quality issues in Sunset Park. Residents are disproportionately impacted by health issues, such as asthma, stemming from traffic-related air pollution from the Gowanus Expressway, a local highway that sees more than 200,000 cars and 25,000 trucks per day. Yeampierre worked with youth advocates to initiate a transportation campaign to help the community prepare a draft environmental impact statement to respond to the state’s expansion plans for the expressway. “We provided air monitors to the young people so that they could educate each other and their community about the air pollutants and health disparities near the expressway corridor,” Yeampierre stated. This campaign marked the first time in which community members were actively involved in responding to state plans for expansion of a local highway.

Working to Address Needs for Climate Justice and Adaptation Yeampierre speaks during the People’s Climate March in New York City in September 2014.

In recent years, climate justice has become a growing concern in major urban areas like Brooklyn. Located near New York City’s largest industrial waterfront, the Sunset Park community is highly vulnerable to storm surges during extreme weather events. These events present a risk of exposure to improperly stored chemicals from shipping and manufacturing industries along the waterfront, as well as hazardous contaminants that may reside in the Sunset Park Brownfields site. “There is clearly an intersection between racial justice and climate change,” Yeampierre stated. “For people of color, a combination of factors such as limited healthcare access, disease susceptibility, and experiences of historical trauma makes them very vulnerable to the impacts of climate change.”

Recognizing these risks, Yeampierre and others at UPROSE began working to address climate justice needs for the Sunset Park community. For example, in 2006, UPROSE received one of the first Brownfields grants funded in the state of New York to look at how planning could address climate change. Following Superstorm Sandy and during recovery efforts, Yeampierre and others held a meeting to determine which actions would best suit the needs of the community. Community members shared and identified affordable strategies to make their homes and neighborhood more sustainable in the wake of climate change events. This included ideas to organize and perform block-by-block assessments to identify climate vulnerabilities within residences. In response, UPROSE launched the Sunset Park Climate Justice and Community Resiliency Center, which aims to respond effectively to future severe weather events by coordinating resources and engaging residents and local businesses in adaptation plans.

“To define the climate justice movement, we have stopped using the word ‘resilience’ and instead use ‘resistance’. Resilience communicates that we are helping communities bounce back – to environmental racism, discrimination, and neglect – however, that is not the end result that we desire. We want to help communities become more resistant and bounce forward during adaptation, as well as rebuild to a better position than where they started.”

Yeampierre and others continue to be involved with numerous local climate justice campaigns and efforts, including the Peoples' Climate March, which attracted more than 400,000 participants in New York City in September 2014. During the event, marches were happening in solidarity in countries all over the world to raise awareness on the issues of climate change.

Having environmental justice communities lead and become engaged in determining their future is the only way to prevent disasters from completely displacing them. – Elizabeth Yeampierre

From her experience, Yeampierre noted that the top-down approach to solving local climate justice issues is dated and will no longer work. “I am able to better understand my role by stepping back, so that the communities can step up,” she stated. “Therefore, the most effective model is one that allows communities to step up, lead, and speak for themselves. This requires stakeholders to abide by different principles, to be humble, and to see communities as partners, rather than passive recipients of good intentions.”

Overall, climate justice requires a leaderful community and not one person speaking for everyone. Recognizing that everyone’s expertise is critical and creating interdisciplinary partnerships is extremely important to address these issues.

Read more in Yeampierre’s article in The Guardian: Hurricane Katrina proved that if black lives matter, so must climate justice.

Although she was unable to attend, Yeampierre was featured as one of Vogue’s 13 women climate warriors to address global warming for the United Nations Framework Convention on Climate Change and COP21 negotiations held in Paris in December 2015.