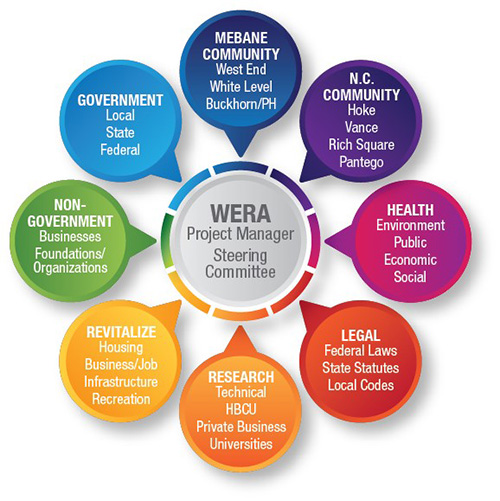 In response to lack of infrastructure and health disparities in three low-income minority communities in Mebane, North Carolina, residents established WERA as a community-based environmental protection organization. Through its efforts to address local civil rights and environmental justice concerns, WERA created COMR as a new research paradigm. Under a grant from the National Institutes of Health Partners in Research program, WERA collaborated with the Institute for Families in Society at the University of South Carolina-Columbia to assess the value of their partnership with local university researchers and laboratories in educating and engaging citizens through scientific research. 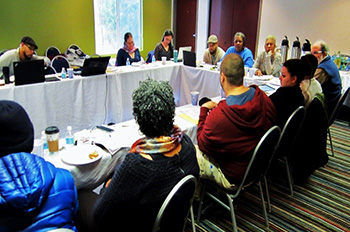 COMR’s key principles include “funding equity,” “management parity,” and “science for compliance” for community-based organizations (CBOs) when partnering with university and other federally-funded researchers. Unlike university-managed research models, COMR places community members in the role of principal investigator, requiring that CBOs be funded directly, manage the research process, and retain ownership of scientific data.

With support from a three-year environmental justice grant from the U.S. Environmental Protection Agency, WERA developed a CPS model to operationalize its COMR approach. Combining the two models, WERA facilitated the collection of scientific data needed to encourage legal compliance and enforcement of public health statutes by local, state, and federal actors.

Early on in its work, WERA recognized the importance of building the skills of its residents to sustain its community-led efforts. As part of the organization’s initial efforts to address the lack of basic amenities in three neighborhoods in Mebane, WERA partnered with students and faculty at the University of North Carolina at Chapel Hill School of Public Health (UNC) in 2000 to collect and analyze water samples from private households and community streams. In this role, the UNC team also trained WERA staff and volunteer residents on quality control and data collection procedures, environmental sampling, hazard identification, and community mapping. Trainees became certified community monitors and played a leading role in participant recruitment, data collection, and information distribution.

Using the COMR framework, WERA has maintained relationships with university partners who helped develop the water and sanitation training and surveillance program. WERA also works with its academic partners to mentor youth through its career development program, the DREAM Network.

Building community capacity beyond Mebane. WERA and its university partners have been invited to educate peer groups throughout the country on COMR principles, best practices, and lessons learned. This will allow other communities to learn from WERA’s experience and establish the capacity to lead their own community-driven research efforts.

The DREAM Network has also played an important role in encouraging the use of a COMR framework and the CPS approach. Individuals who participated in the DREAM Network as youth are now incorporating COMR principles in their professional lives, and sharing this information with the communities in which they study, teach, work, and live.

Obtaining support to provide training for underserved communities. To implement COMR fully, an organization must have the necessary staff and infrastructure to execute and sustain research and CPS partnerships. WERA continues to hear from universities, government agencies, professional associations, and community groups interested in learning about COMR principles and best practices. With additional funding, WERA can continue to develop and deliver training that will help replicate WERA’s successes in underserved communities throughout the country.

Securing resources to translate research into action.COMR’s innovative approach aims to empower low-income minority communities so that they can produce scientific data and translate that research into action. Success in this area requires adequate funding for research programs that emphasize equitable community-university partnerships, and recognition of the importance and benefits of community-driven research.

Wilson O. 2012. Are you getting the basic amenities your taxes paid for? U.S. Environmental Protection Agency Environmental Justice in Action Blog, 7 December.