Including Health Effects in the Goods Movement Discussion The Los Angeles and Long Beach Ports are the largest and busiest in the U.S.
(Photo courtesy of Wikimedia Commons)

With mounting concerns about air pollution created by ports and associated goods movement and freight transportation in southern California, community groups reached out to and partnered with University of Southern California (USC) programs to find healthy solutions for impacted communities.

By combining science, community-based research, and input from people directly affected, the project played a role in shifting the debate around goods movement to include environmental, community, and health impacts.

More than 40 percent of the nation’s imports come through the southern California Ports of Los Angeles and Long Beach and are transported by trains and trucks throughout the country. This concentrated area of goods movement creates high levels of air pollution that can bring adverse health consequences for people living in this region, especially for those in close proximity to ports, railyards, and highways.

Based on community concerns about how near-roadway pollution might affect asthma, heart disease, pregnant women, and children’s lung development, academic and community groups came together to address this problem.

With more and more studies showing negative health effects from exposure to pollution near freeways and busy roads, these partners decided to focus their research on near-roadway air pollution. 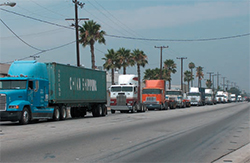 Community residents were concerned about how near-roadway pollution tied to goods movement might affect their health.
(Photo courtesy of Andrea Hricko)

The A-Team members also learned where pollution comes from, how it affects the body, and the different parts of the global trade system. This knowledge and experience empowered A-Team members to fully engage and participate in public hearings on air pollutants. Data collected by A-Teams was also used to inform and engage area residents.

The air monitoring activities not only provided a hands-on method for A-Team members to learn about air pollution and be involved in community-based research, but also produced street-level data not available from air quality monitors operated by government agencies. Because the data were collected and communicated by residents, community members found it more tangible and relevant than reading expert results on paper. 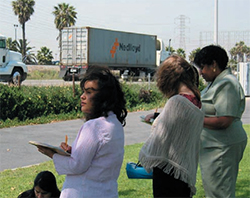 An A-Team counts trucks passing an elementary school in Long Beach on their way from the Port to a rail yard.
(Photo courtesy of Andrea Hricko)

Information collected by the A-Teams provided important data for scientific research, community presentations, and campaigns led by the community organizations. For example, in Long Beach, mothers of children with asthma counted as many as 550 trucks passing an elementary school in one hour on the way to and from the port. In Wilmington, residents made measurements that showed a proposed highway expansion would come as close as 50 feet to homes, schools, day-care centers, and churches — well under the 500-foot buffer recommended by air quality agencies.

Changing the policy and regulatory landscape. THE Impact Project successfully increased community and policymaker awareness of the negative impacts of diesel truck and locomotive air pollution by conducting and disseminating research.

For example, the project was influential in informing decision makers, who then tabled consideration of a new inland port, and helped slow the environmental review of a second off-dock loading rail yard in the West Long Beach area until all health impacts could be considered. The collaborative also advocated for alternative technologies that would remove or reduce pollution produced in ports and by associated transportation. Project partners have been appointed to important oversight posts for the San Pedro Bay Ports Clean Air Action Plan and to national, state, regional, and local committees involved in goods movement.

The Goods Movement 101 training is used by community-based organizations to help people understand the system of moving freight from Asia to the ports and on to the rest of the country as well as the way that the system affects health.
(Photo courtesy of University of Southern California)

Community and leadership engagement. The A-Team members became strong community leaders who raised awareness throughout their community and communicated results of their research to City Council and various government agencies. THE Impact Project also created the Goods Movement 101 training that community-based organizations can use to help people understand the goods movement system, its effects on human health, and the types of policy changes that can lessen health impacts. Hundreds of people in Southern California have been through this training, which can be adapted for use in other regions.

Establishing a national movement. As THE Impact Project progressed, project partners began to receive inquiries from people in other parts of the country and even other parts of the world, who were seeking assistance with their own goods movement issues. To help meet this demand, the project organized and hosted several national conferences, the last of which was attended by more than 550 people from 16 states and four countries. The project also created various resources, including a manual for community-based research on traffic pollution and videos about leadership development.

During these national conferences, discussions occurred about the need for a nationwide network. With the support of the Kresge Foundation and the leadership of the Urban & Environmental Policy Institute, the Moving Forward Network launched in 2015. The Moving Forward Network is a nation-wide coalition of air pollution advocates seeking to improve public health, quality of life, environmental integrity, labor conditions and environmental justice by supporting the organizing, advocacy, education, and research efforts of partners around the United States in efforts to improve the global trade system. 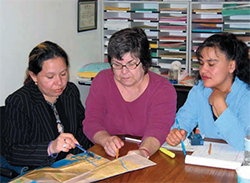 Andrea Hricko (middle) led the Community Outreach and Education Programs of the Southern California Environmental Health Sciences Center and the Children’s Environmental Health Center at USC from 1997 to 2016. She is pictured here with two founding members of the A-Team from the Long Beach Alliance for Children with Asthma.
(Photo courtesy of University of Southern California)

Working together. Bringing academic institutions together with various types of community and environmental justice organizations comes with unique challenges. In addition to having different priorities and goals, each organization had its own decision-making process. In some cases, members knew each other for years before the project began, which helped to address this challenge. A significant amount of time was also spent building relationships based on developing trust and nurturing respect among the partners. Working together and being successful through efforts such as the Ports’ Clean Air Action Plan and the Clean Trucks Program also helped build collaborative momentum for the project.

Prioritizing and resources. It was often difficult for project partners to choose between local needs and bigger opportunities, especially with so many local air pollution and goods movement issues needing immediate attention. In addition, since THE Impact Project work was only part of what each of the partners do on a daily basis, partners had to decide how best to allocate their staff and resources. The shared goals of the organizations and the recognition that they could do more good as a collaborative group helped bring the partners together to deal with regional issues tied to goods movement. THE Impact Project partners have been holding meetings nearly monthly since the Project’s inception in 2005. In 2015, THE Impact Project sponsored a lunch forum on Diesel and Your Health. In 2016, THE Impact Project sponsored a Youth and Community Research Symposium.

In addition to NIEHS funding of the USC community engagement programs, funding was received from The California Endowment, The California Wellness Foundation, and The Kresge Foundation. In 2017, Jill Johnston, Ph.D., professor of preventive medicine, took over leadership of the outreach programs at USC.