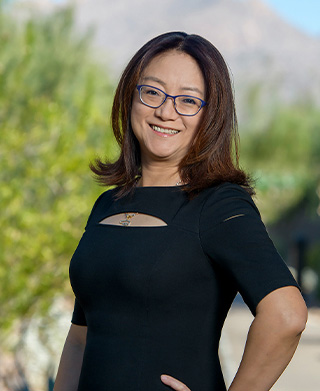 Zhang is an endowed chair and professor of pharmacology and toxicology at the University of Arizona College of Pharmacy.
(Photo courtesy of Donna Zhang, Ph.D.)

Donna Zhang, Ph.D., studies a protein called nuclear factor erythroid 2-related factor 2 (NRF2) and its signaling pathway. One of Zhang’s interests is understanding the interaction between NRF2 and arsenic exposure, and how it contributes to the development of human disease. “Arsenic exposure is a global health issue,” she said. “We know there is a link between arsenic exposure and diseases like cancer and type II diabetes, but the mechanisms are not well understood. Through our work, we hope we can identify these mechanisms. If we can do that, then we can find a way to prevent or treat disease.”

Notably, Zhang’s efforts have led to novel discoveries about NRF2 protein and how targeting NRF2 could be used to treat arsenic-induced diseases. She was recently vested the University of Arizona Musil Family Endowed Chair for Drug Discovery. This endowment is extended to outstanding faculty members to initiate pioneering research and expand expertise in drug discovery.

Uncovering the Dark Side to NRF2

Zhang and her team study how NRF2 signaling controls key aspects of this antioxidant defense mechanism, where NRF2 helps maintain cellular redox and metabolic balance. When NRF2 is activated, it triggers a cellular antioxidant response by inducing genes that can combat the harmful effects of oxidative stress.

The team previously found that activation of the NRF2 defense response has been shown to play a role in alleviating diabetic complications, including healing skin ulcers.

While studies show that NRF2 can protect healthy cells, Zhang was the first to uncover what she calls a dark side to NRF2. She found that NRF2 also protects cancer cells, thus enhancing resistance of cancer cells to chemotherapeutic drugs.

“NRF2 research is a very fascinating field,” she said. “NRF2 is in every single cell type, and in normal cases, its expression is activated intermittently to protect cells from damage. But in the case of cancer cells that hijack NRF2, it is activated continuously, thus allowing these cancer cells to survive.”

According to Zhang, these NRF2-addicted cancer cells are particularly vulnerable to NRF2 inhibition. In a recent study, she and her team demonstrated that inhibition of NRF2 can decrease the spread of cancers caused by arsenic exposure. The team is currently working to develop NRF2 inhibitors as therapeutics, and they have already developed the first NRF2 inhibitor.

The team is also using mouse models to examine the interaction between arsenic exposure, NRF2 signaling, and disease development. They recently found that chronic arsenic exposure is associated with an increased risk of cancer through continuous activation of the NRF2 response.

“My research has always focused on translating mechanistic, laboratory-based findings into novel therapeutic options to treat disease, and drug discovery is a vital part of achieving this goal,” Zhang said.

Her two decades of research on NRF2 has shed light on potential strategies to alleviate arsenic-induced diseases. In the coming years, Zhang and her team are paving a two-directional path in therapeutics using NRF2 inducers and inhibitors to prevent cancer or to enhance the efficacy of cancer treatments. 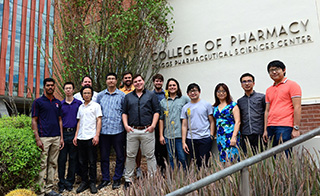 Since joining the University of Arizona in 2005, Zhang has mentored eight doctoral students who are now lead researchers in the field. She has also mentored several outstanding postdoctoral fellows. To Zhang, training a future generation of passionate scientists is important to increase the impact of her research.

“The students I mentor are my academic children,” she said. “I am happier about their success than my own because ultimately, they will expand this field forward.”

Zhang’s success is demonstrated by the number of awards she has received, as well as the awards her current and former trainees have received.

Zhang actively participates in the Keep Engaging Youth In Science (KEYS) Research Internship Program, a summer program that allows high school students to work alongside University of Arizona researchers to solve real-world problems. Since 2005, Zhang’s laboratory has participated in this program to provide tools and hands-on experience for high school students to conduct a scientific experiment and communicate the results.

As associate director of the University of Arizona Superfund Research Program Center, Zhang studies how exposure to arsenic contamination from nearby mine tailings leads to an increased risk of disease. She is also involved in the Center’s research translation efforts, where she works with other scientists to communicate research results to local and federal stakeholders, including Native American communities affected by mining such as the Navajo Nation.

“Research translation is an important part of my work,” said Zhang. “Communicating research findings to other scientists and the general population allows us to increase the impact of our research and develop methods for disease prevention and intervention. Ultimately, our goal is to disseminate knowledge to improve public health.”

As an internationally recognized researcher, Zhang has published over 150 peer-reviewed research papers and review articles in many of the most highly regarded journals. Zhang said in this year alone, 4,300 publications have cited her research. She is amazed to see how much the NRF2 research field has grown, and excited to see that more people are interested in understanding the interplay between NRF2, the environment, and human diseases.

Early in her career, Zhang received the Outstanding New Environmental Health Scientist (ONES) award to study the NRF2 pathway and its role in arsenic-induced disease. This award supports talented early-stage environmental health investigators and helps them launch an innovative research program.

“Since the very beginning of my career, NIEHS funding has been pivotal to my success,” said Zhang. “The ONES award helped me jumpstart and advance very fast not only in academia but also in my leadership in the NRF2 research field.”

In 2012, Zhang was the recipient of the prestigious Society of Toxicology Achievement Award for significant contributions to the discipline of toxicology within the last 15 years.

The RIVER grant, which funds individual researchers rather than specific projects, provides Zhang the flexibility to identify new pharmaceuticals to treat arsenic-related diseases and increase the efficacy of existing anti-cancer drugs. She plans to do a rigorous investigation of arsenic pathogenesis to dissect the relationship between arsenic and NRF2.

“The RIVER award allows us to do riskier, more ambitious, cutting edge research to develop therapeutic options to mitigate arsenic-induced diseases and protect us from environmental toxins,” said Zhang. “I am very grateful for NIEHS’ continuous support. With this funding, we will consolidate a broad-spectrum project ranging from mechanistic investigation to drug development.”