Wen Xie, M.D., Ph.D., studies how a cellular protein that detects environmental chemicals, called pregnane X receptors or PXR, also plays a role in normal functions and liver disease. He determined that PXR-stimulating drugs used to treat trauma patients contribute to liver damage, and he identified treatments that can prevent these PXR-related effects. 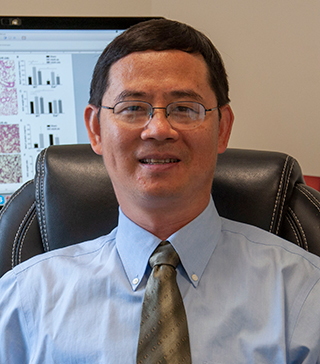 Xenobiotics are substances, such as environmental pollutants, pesticides, and drugs, that come from outside the body. Xenobiotic receptors, or XRs, are protein molecules within cells that bind to xenobiotics and play a role in how they influence cellular processes. XRs also play a role in how cells use pharmaceutical drugs and naturally occurring chemicals inside cells and tissues. With these various functions, XRs can have many effects on health and disease.

Xie’s lab focuses on XRs including PXR. He studies how environmental and genetic factors, influenced by XRs, sometimes lead to liver damage and other health problems. His long-term goal is to develop XR-targeted therapies to help manage diseases such as fibrosis, metabolic syndrome, alcoholic liver disease, and neurologic disorders. Xie’s medical expertise enhances his research.

“I want to do research with a human relevance in the context of environmental health,” he said. “I always have a goal of trying to understand what environmental chemical or factor can, through the activation or inhibition of XRs, impact disease and what’s the mechanism. Knowing the mechanism, we know how to intervene.”

The first xenobiotic receptor Xie studied was PXR during his postdoctoral training at the Salk Institute in San Diego. During this time, Xie pioneered the creation and utilization of PXR-humanized mice in which the mouse PXR is genetically replaced with the human PXR. Human and mouse PXRs often respond differently to environmental chemicals and therapeutic drugs. Insertion of the human receptor in a mouse model allows researchers to study how it functions without experimenting in humans.

A recent finding of Xie’s lab relates to PXR activation in trauma patients. Trauma can induce organ injury due to hemorrhagic shock from excessive hemorrhaging, or bleeding. One organ known to be injured is the liver. Many medications used in intensive care units to treat trauma patients trigger PXR activation and, in some cases, patients were taking PXR-activating medications prior to the incidence of trauma. Xie studied whether PXR stimulation before or after trauma increases hemorrhagic shock-induced liver injury in a humanized mouse model, and he found that both treatments led to increased injury. Therefore, PXR activation sensitized the liver to increased damage.

Xie then studied how PXR activation led to increased liver injury. He knew that one of the genes that is stimulated by PXR activation is the liver enzyme cytochrome P450 3A (CYP3A). An important function of CYP3A is the production of reactive oxygen species, or ROS. ROS are oxygen-containing molecules that have multiple important physiologic functions. But sometimes they can react with other small molecules to cause cellular and tissue damage.

Xie designed experiments using humanized mice to identify the role of CYP3A and ROS generation in PXR-stimulated liver injuries. When researchers removed the CYP3A enzyme from humanized mice, and when the CYP3A enzyme activity was inhibited using drugs, PXR activation did not increase liver damage, demonstrating that CYP3A is required for that effect to occur.

Treatment with antioxidants to inhibit oxidative stress caused by ROS also reduced the PXR-related liver injury, even when PXR activated CYP3A. In total, Xie determined that PXR can sensitize hemorrhagic shock-induced liver injury and the process involves both CYP3A activation and ROS generation. He plans to use this information to develop therapeutics that can help reduce liver injury in trauma patients.

In 2019, Xie was awarded the prestigious Revolutionizing Innovative, Visionary Environmental Health Research (RIVER) Outstanding Investigator Award from NIEHS. The grant funds individual researchers instead of specific projects. Xie says he enjoys the freedom from the restrictions of a traditional grant focused on a structured research plan and very specific aims. Thanks to RIVER funding, his lab can more easily explore new interests and ideas.

Another new interest in Xie’s lab is whether and how certain types of RNA called long non-coding RNAs, or lncRNAs, contribute to resistance to chemotherapy drugs. Xie proposed that, when lncRNAs interact with XRs, they can affect how the body and cells process drugs and those changes may lead to chemotherapy resistance.

Xie also credits RIVER funding with his lab’s increased productivity. On average, his lab typically published 8 to 10 papers a year. In the past year, his lab doubled its output to 19 publications because Xie could spend more time writing papers. In addition, he is now mentoring his largest number of graduate students at one time – six doctoral candidates and one master’s student.

Going forward, Xie will continue research to determine how XRs, through their interactions with environmental chemicals and medications, influence human disease.

“I truly believe understanding the mechanism [of how this happens] is really important. Harnessing knowledge of the mechanism, we can design ways to either promote an interaction if it’s good or inhibit and prevent it from happening if it’s harmful,” said Xie.