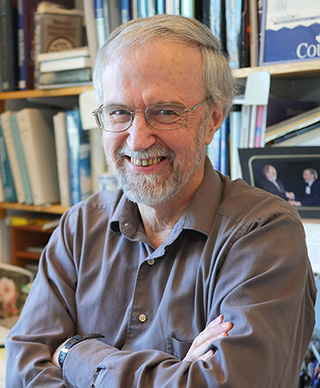 Walker is an American Cancer Society Research Professor and Howard Hughes Medical Institute Professor in the Department of Biology at the Massachusetts Institute of Technology.
(Photo courtesy of Graham Walker, Ph.D.)

Graham Walker, Ph.D., studies the processes cells use to repair and tolerate DNA damage from environmental pollutants. For more than 40 years, he has worked to understand how cells respond to DNA damage, and how these processes can introduce mutations that lead to cancer and other human diseases.

“The TLS process is critically important to human health because it helps cells survive DNA damage, but it can come at a cost,” said Walker. “It isn’t the kind of repair system you would think we would want because it makes a lot of mistakes. However, as we drill into these details, we are finding that there is so much more to be learned than just the strict biochemistry.”

In 2017, Walker was one of eight environmental health scientists to receive an inaugural Revolutionizing Innovative, Visionary Environmental Health Research (RIVER) Outstanding Investigator Award from NIEHS. The grant, which funds researchers rather than specific projects, provides Walker with flexibility to explore novel directions in his research.

From the Ames Test to TLS

Walker was drawn into the world of DNA repair and mutagenesis as a postdoctoral fellow at the University of California, Berkeley, under the guidance of Bruce Ames, Ph.D. Ames’ group created the Ames test, still used today, to determine whether a given chemical is likely to cause cancer. The Ames test uses bacterial strains that include a derivative of a naturally occurring drug-resistant plasmid, a small circular DNA molecule, known as pKM101. This molecule significantly increases the mutation rate of bacterial genes in response to chemical exposures, playing an important role in this quick and convenient test to estimate carcinogenic potential.

“I decided there must be something really interesting on that plasmid because it led to much higher mutation rates in bacteria for the same amount of damage,” said Walker.

After arriving at the Massachusetts Institute of Technology, his current employer, Walker continued to study the mechanisms behind these mutations. Walker with his current students and lab alumni at his lab’s 40-year anniversary celebration in 2016.
(Photo courtesy of Graham Walker, Ph.D.)

Walker and his research team discovered the specific genes of pKM101 that are needed for it to produce more mutations. They showed that these genes are orthologs, or genes that evolved from a common ancestral gene, in the Escherichia coli (E. coli) chromosome that are required for the bacteria to mutate in response to DNA damage. This work helped lay the groundwork for the discovery of TLS DNA polymerases and how they are controlled.

“When we first sequenced these genes, nothing like them had been previously reported, but subsequently more and more related genes were discovered in all domains of life,” said Walker. “After decades of work by many labs, we now know that these are all TLS DNA polymerases and that the pKM101 plasmid encodes a polymerase that is responsible for the increased mutations.”

Walker’s prior research on the mutagenesis-enhancing function of pKM101 also led him to analyze E. coli’s SOS system, a set of biological responses that are activated to rescue cells from severe DNA damage. Walker and his team identified genes turned on by DNA damage that are regulated as part of E. coli’s SOS response. Many of the genes encode functions involved in DNA repair or mutagenesis. This work on the SOS response of E. coli was the first to directly demonstrate, in any organism, that DNA damage from environmental sources can change gene expression.

By further exploring TLS DNA polymerases in E. coli, he also identified the biological role of one of the most conserved DNA-damage response enzymes, DinB, which encodes a TLS DNA polymerase, and reported that the gene is required for resistance to some DNA-damaging agents. His work on DinB also suggested an additional mechanism by which antibiotics can become toxic to bacterial cells.

“While a postdoc in the mid 1970’s with Bruce Ames, my ambitious hope was that by studying pKM101, I would learn something about the fundamental mechanism of how mutations arose in bacteria and humans, and might even learn how to control it,” said Walker. “That is now happening with my current, NIEHS-funded work.”

Some tumors can withstand damage from chemotherapy drugs by relying on TLS, which allows them to survive by replicating past damaged DNA caused by the drugs. In eukaryotes, including humans, mutagenic TLS is carried by two TLS DNA polymerases known as Rev1 and Pol zeta.

In addition to his innovative research, Walker is devoted to improving education and helping undergraduate students. In 2002, Walker became a Howard Hughes Medical Institute Professor and used his funding to establish a science education group modeled on his laboratory research group.

“I feel that training the next generations of scientists is as important as the science itself, and I have been incredibly lucky to have a spectacular set of grad students and post docs work with me over the years,” said Walker. “I have tried to focus as much on training, through teaching and mentoring, as on advancing the science.”

“Not only are these TLS polymerases responsible for introducing a lot of mutations that cause cancer, they also help cancer cells survive in the face of chemotherapy drugs that introduce DNA damage that would otherwise kill them,” said Walker.

Recently, Walker and his colleagues discovered that a small molecule and compound known as JH-RE-06 can block the Rev1-Pol zeta mutagenic TLS pathway by interfering with the ability of the Rev1 domain to recruit Pol zeta. The researchers tested the molecule in human cancer cell lines and showed that it enhanced the ability of several different types of chemotherapy to kill cancer cells, while also suppressing their ability to mutate in the presence of DNA-damaging drugs. In a mouse model of human melanoma, they found that not only did the tumors stop growing in mice treated with a combination of the chemotherapy drug cisplatin and JH-RE-06, those mice also survived longer.

“I am able to take more chances and try more high-risk experiments with the RIVER award,” said Walker. “The flexibility and extra resources are now allowing me to identify TLS inhibitors, which are offering startlingly unexpected mechanistic insights and also show potential to improve chemotherapy.”