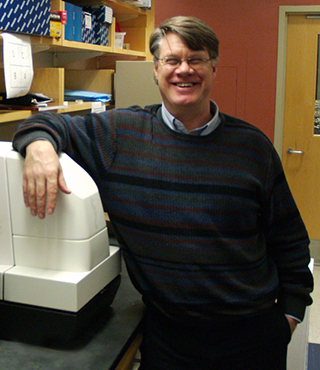 Van Houten is a professor at the University of Pittsburgh Medical Center Hillman Cancer Center.
(Photo courtesy of Van Houten)

Ben Van Houten, Ph.D., uses innovative techniques to study how common forms of DNA damage are detected and repaired. DNA damage can occur in cells after exposure to environmental pollutants. If the damage is not repaired, it can lead to mutations contributing to cancer, premature aging, neurodegeneration, and other diseases. Van Houten’s research is revealing how proteins find and repair these damaged DNA sites known as DNA lesions.

“One concept that has driven me throughout my career is a simple question of how DNA repair enzymes see DNA lesions,” Van Houten said.

Through his NIEHS-funded research, he is studying repair proteins at the single molecule level to see how they recognize damaged DNA, how these proteins interact with each other, and how that leads to genome stability. His team combines biochemistry, single molecule analysis, and cutting-edge cell biology tools to view this complex process of DNA damage repair in living cells.

“It turns out a lot of repair enzymes cannot see or work on DNA damage that is wrapped in a nucleosome, which is a basic structural unit of how we package DNA in our cells,” said Van Houten. “We wanted to identify proteins that are able to find this type of DNA damage.”

In collaboration with NIEHS researcher Sam Wilson, Ph.D., Van Houten’s team found that a protein that helps safeguard against DNA damage from the sun is also useful for finding general DNA damage and overseeing its repair. The protein, ultraviolet-damaged DNA-binding protein (UV-DDB), is a key protein in human nucleotide excision repair (NER), an important mechanism for removing and replacing damaged regions of DNA caused by UV light. Their study showed that the protein also senses damage and plays a key role in base excision repair, another important pathway that involves recognizing and removing a single base from damaged DNA.

“UV-DDB was thought to have a supporting role in DNA repair, focusing specifically on NER, but our recent research suggests that it may actually have a lead role in identifying damage to bases wrapped in nucleosomes and could be the first responder,” said Van Houten. “If you’re going to fix a pothole, you have to find it first. That’s what UV-DDB does.”

The research team developed a new method to track enzymes involved in DNA repair in 3D using real-time, single molecule imaging. They induced oxidative stress in DNA and observed that UV-DDB was rapidly recruited to sites containing specific DNA damage. UV-DDB also stimulated repair activity by forming complexes with enzymes that are essential in base excision repair. They found that UV-DDB can find damage on DNA buried in nucleosomes and help DNA repair molecules access those sites.

“We knew that UV-DDB binds to abasic sites, which are formed during base excision repair. Because abasic sites are not normally produced with UV light, it didn’t make sense that UV-DDB was involved,” said Van Houten. “Using our single molecule imaging techniques, we were able to observe the biochemistry happening in a living cell and provide insight into a new damage sensor role for UV-DDB in base excision repair.”

In a more recent study, Van Houten and his team used a collection of single molecule experiments to explore how XPA, another protein that plays a key role in NER, interacts with DNA. They found that XPA bends DNA and pauses in response to DNA damage, revealing the location of damaged DNA and promoting the recruitment of DNA repair proteins.

How Mitochondria Respond to Damaging Exposures

As part of another NIEHS-funded project, Van Houten worked with a large group of collaborators including Marcel Bruchez, Ph.D., of Carnegie Mellon University, and University of Pittsburgh colleagues Patricia Opresko, Ph.D., Wei Qian, Ph.D., Simon Watkins, Ph.D., and Edward Burton, M.D., D.Phil., to develop a tool to precisely damage mitochondria using a combination of chemical dyes, lasers, and genetic engineering. By triggering oxidative stress in the precise location that hurts the mitochondria of cells, the researchers could measure how mitochondria may change in the body in response to toxic events. In a video describing his work, Van Houten compares mitochondria to nuclear power plants that generate energy for the cell.
(Photo courtesy of Van Houten)

When the researchers damaged the mitochondria, the mitochondria produced a second wave of reactive oxygen species, generating a vicious cycle of damage from which the cell could not recover.

“It is basically like taking the control rods out of a nuclear reactor,” said Van Houten. “Just like an uncontrolled nuclear power plant would begin to leak radioactivity, the damaged mitochondria generate superoxide radicals, which turn into hydrogen peroxide and leak out into the cell.”

When the researchers unleashed the technique on cells, they were surprised to see that long stretches of DNA were not damaged and that only the protective endcaps of chromosomes, called telomeres, sustained damage. Shortened telomeres have been linked to premature aging, cancer, and other diseases.

When the researchers unleashed the technique on cells, they were surprised to see that long stretches of DNA were not damaged and that only the protective endcaps of chromosomes, called telomeres, sustained damage. Shortened telomeres have been linked to premature aging, cancer, and other diseases.

The research team recently showed that this approach also works in mitochondria in the central nervous system of living zebrafish larvae, providing a powerful new tool for determining how mitochondrial damage influences DNA in neurons and how that may relate to neurodegenerative diseases.

“We have opened up new technologies where we can visualize DNA damage and repair that will allow the field to answer questions that we just couldn’t answer before,” Van Houten added. “The wondrous thing about science is that the next big discovery always lies in front of us.”

After completing his doctoral degree at Oak Ridge National Laboratory, Van Houten joined the lab of Aziz Sancar, M.D., Ph.D., who later received the Nobel Prize in Chemistry in 2015 for his mechanistic studies of DNA repair. In the Sancar lab at the University of North Carolina at Chapel Hill, Van Houten studied how bacterial NER enzymes function at a molecular level to find DNA lesions. 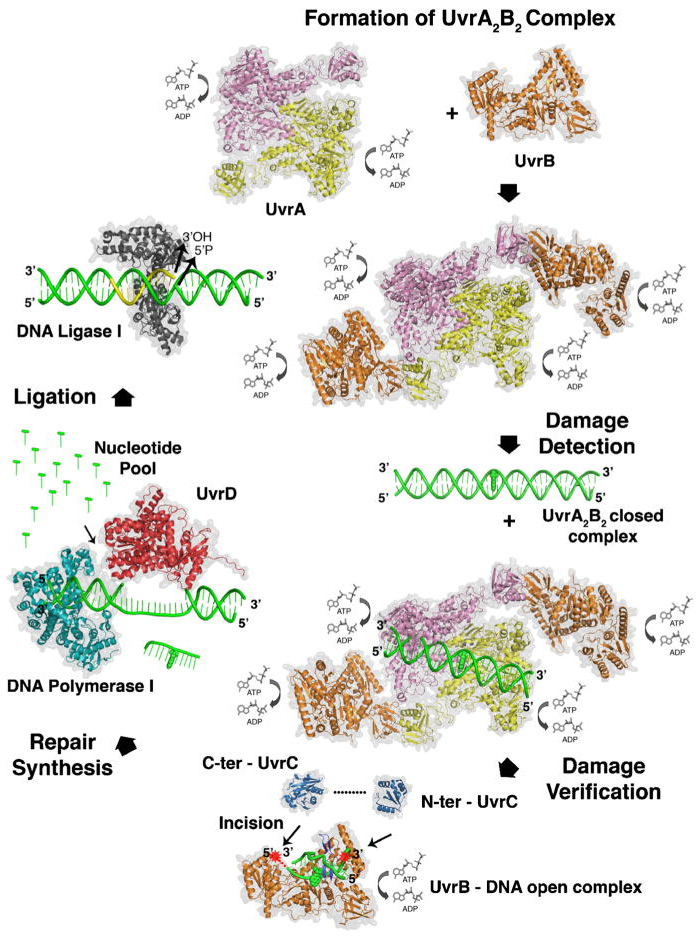 In a tribute to Sancar’s work in 2015, Van Houten outlined the complex process of bacterial NER. (Image from Van Houten 2016)

“We were able to do highly innovative experiments that led to a molecular understanding of how NER proteins process DNA damage,” said Van Houten. “Aziz took me in with little molecular biology or biochemical experience and I owe my career to his outstanding training.”

As principal investigator of the DNA Repair and Mitochondrial Damage Group in the Laboratory of Molecular Genetics, Van Houten was recognized as a leader in DNA repair and mitochondrial disease research. In his work with DERT, Van Houten headed the Program Analysis Branch, which evaluates the Institute's extramural grant portfolio to set priorities, formulate strategic plans, and assure the maximum benefits of research funding.

“In the Program Analysis Branch, we were able to track publications for the first time using a system our team developed. Led by Paul Jordan, the system joined the grant file with PubMed to determine what NIEHS-funded grants are producing what papers,” Van Houten said. “This project led to the Scientific Publications Information Retrieval System (SPIRES), a model now used across the NIH. It is a legacy that I’m really proud of.”

An Emphasis on Training and Collaboration After arriving at the University of Pittsburgh in 2008, Van Houten continued his work using innovative biochemistry and imaging techniques to monitor how DNA repair proteins find damage.

“A big motivation for my move was that I wanted to interact more with graduate students. I missed the mission of training new scientists at the graduate-student level,” Van Houten said. “We have such a collaborative group here at Pittsburgh. I have been fortunate to land at this university and be supported by NIEHS.”

Moving forward, Van Houten and his team will continue their work to follow individual DNA repair enzymes at the molecular level. In collaboration with researchers from different scientific fields, they are developing high-resolution methods to watch these individual repair proteins in living cells as they interact and process DNA damage in real-time.