Studying the Puzzle Pieces that Contribute to Parkinson’s Disease Risk 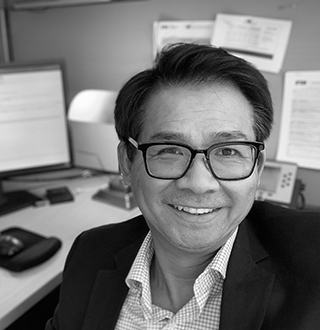 Tieu became a professor at Florida International University (FIU) Robert Stempel College of Public Health and Social Work in 2016 and department chair in 2018.

Kim Tieu, Ph.D., has long been fascinated by brain disorders, ever since learning about drugs that target the nervous system as a college student. He received an NIEHS Revolutionizing Innovative, Visionary Environmental Health Research (RIVER) grant after discovering a new function of a long-studied protein involved in Parkinson’s disease (PD). The discovery, combined with Tieu’s current research efforts, could improve treatment options for the progressive nervous system disorder.

“The RIVER grant gives my lab the flexibility to support many exciting projects that would not have been possible otherwise,” said Tieu.

A Fascination and a Need

The symptoms of PD occur when dopamine-producing neurons, a type of nerve cell in the brain, begin to die. Dopamine is a chemical that helps nerve cells communicate with each other to coordinate body movement.

Because researchers don’t know what causes neurons to die, a drug to reverse the disease or alleviate all symptoms of PD has not yet been developed. Often, patients must take multiple medications to manage their symptoms.

Working as a pharmacist after college, Tieu noted this lack of effective therapeutics, and decided to pursue a doctoral degree at the University of Saskatchewan, where he used cell models to test a class of compounds used to treat PD. This early experience greatly influenced Tieu’s career, in which he studies the underlying mechanisms of PD to inform the development of more effective therapeutics.

Tieu has led labs at the University of Rochester, University of Plymouth, and most recently, Florida International University (FIU). At FIU, he leads the Parkinson’s Disease Research Laboratory, which studies how environmental toxicants, genetic mutations, and interactions between genes and environmental conditions contribute to the development of PD.

While at the University of Rochester, Tieu received his first NIEHS research project grant to examine the mechanisms underlying the association between paraquat and PD. Paraquat is an herbicide used in commercial agriculture to control weeds.

“There have always been questions in the research community about how paraquat was able to get into nerve cells that released dopamine,” said Tieu.

Tieu also found that microglia, a special type of nerve cell located in the brain and spinal cord, converted paraquat, giving it access to neurons. Once inside the neurons, the resulting chemical causes oxidative stress and neurotoxicity, contributing to cell death.

“The transporters can have polymorphisms, or small differences in the genetic sequence, that may increase a person’s risk of developing Parkinson’s,” said Tieu. “These initial studies provided a critical piece of the puzzle that we needed to better explain the mechanisms linking paraquat to increased PD risk.”

While at the University of Rochester, Tieu met colleague Yisang Yoon, Ph.D., who was highly interested in mitochondria fission and fusion, the division of one mitochondrion into several mitochondria and the coming together of mitochondria, respectively.

“Yisang Yoon talked about how dynamin-related protein-1, or Drp1, a protein required for mitochondrial fission, can lead to cell death,” said Tieu. “I immediately felt that this protein might play a role in neurodegenerative diseases such as PD.”

Tieu and Yoon worked together to study Drp1 and PTEN-induced putative kinase-1 (PINK1), a gene thought to increase a person’s chance for developing PD. This pilot work resulted in an NIEHS R21 award. After moving to the University of Plymouth a few years later, Tieu continued to test Drp1 inhibition in mouse models exposed to neurotoxicants or with a PINK1 deletion. The deletion was meant to mimic the mutation that some people with PD have.

Tieu found that blocking Drp1 in the vulnerable mouse models reduced cell death and deficits in dopamine release. Essentially, blocking Drp1 reversed the PD process, suggesting a treatment to inhibit Drp1 could be effective against PD. The high impact study explaining this newly-discovered mechanism was published in a 2014 issue of the NIEHS Environmental Factor. 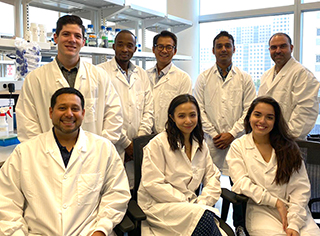 With his RIVER grant, Tieu continues to investigate the therapeutic potential of blocking Drp1. His most recent study blocks Drp1 in experimental models of a protein called alpha-synuclein. His lab is assessing pesticides and manganese, a metal associated with poor neurological outcomes in humans, in combination with alpha-synuclein.
(Photo courtesy of FIU)

As part of his RIVER grant, Tieu’s lab will collaborate with the High-Throughput Molecular Screening Center at the Scripps Research Institute in Florida to screen a few thousand therapeutic drugs for molecules that could inhibit Drp1.

“The idea is that hopefully, we can find drugs already on the market that block Drp1,” said Tieu. “It’s a fast-track approach to move research from bench to bedside.”

Tieu spends much of his time thinking about the mechanisms of PD, but he hasn’t lost sight of important work being done at other laboratories to improve PD’s outlook. Tieu tracks researchers who study biomarkers, which can indicate signs of disease, and how this research could detect PD earlier, giving therapeutic drugs a better chance of success.

“By the time patients see their neurologists, they have already lost 40-50% of their nerve cells that produce dopamine,” said Tieu. “At that point, we can’t bring those cells back, but through the discovery of better biomarkers, interventions can be introduced at an earlier stage of disease.”