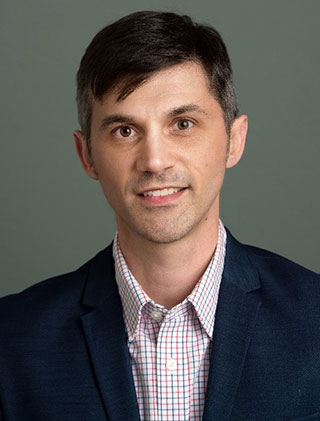 Brandon Pierce, Ph.D., seeks to understand how genetic differences can make a person more or less susceptible to the health effects of arsenic exposure.

Researchers know that arsenic exposure can contribute to health problems such as cancer, but they are only beginning to understand the mechanisms that underlie these harmful effects. Pierce, a former NIEHS-funded Outstanding New Environmental Scientist (ONES) and current Revolutionizing Innovative, Visionary, Environmental Health Research (RIVER) grantee, analyzes inherited differences in how people process arsenic to better understand why some are more susceptible to toxicity. He also studies how exposure to arsenic can modify and damage the human genome.

“When I began my postdoctoral research, I was primarily interested in how a person’s genetics can make them more susceptible to cancer,” said Pierce. “During this time, I also got involved in arsenic research. I learned about the history of arsenic exposure in Bangladesh and believed it offered a great opportunity to explore how genetic differences impact the way people respond to exposures while also exploring behavior changes that might reduce exposure among those at high risk.”

In Bangladesh, people obtain drinking water from wells, many of which are highly contaminated with arsenic. According to Pierce, his work with this population could lead to more information on the genetic profiles of those at higher risk for exposure-related health effects.

A Unique and Unprecedented Resource

To obtain data for his research, Pierce uses the Health Effects of Arsenic Longitudinal Study (HEALS), a large study of 35,000 people in rural Bangladesh, many of whom are exposed to arsenic through drinking water. HEALS, led by Habib Ahsan, M.D., at the University of Chicago, includes questionnaire data, clinical data, biological samples, and drinking water samples. The Columbia University Superfund Research Program Center began HEALS two decades ago to better understand the effect of arsenic exposure on human health.

“HEALS is a unique and unprecedented resource in a number of ways,” said Pierce. “It’s a large study that provides individual-level data on exposures, health effects, and the genetic differences among people, allowing us to look more closely at how genes and the environment interact and lead to certain health effects.”

Using HEALS data, Pierce studied telomere length during his ONES grant. Telomeres are DNA sequences at the ends of chromosomes that bind proteins to protect chromosome ends from damage.

“Telomeres are one of the features of the genome that change over time,” said Pierce. “They shorten as we age. Observing how the genome changes in response to arsenic exposure may help us learn more about the mechanism of arsenic toxicity.”

In addition to funding his initial studies, the ONES grant allowed Pierce to form an external advisory committee of experienced researchers who guided him throughout the grant.

“The committee encouraged me to focus on aspects of my proposal that were likely to produce something new,” said Pierce. “They made me think hard about the technologies I used to measure telomeres, which led to a lot of time spent comparing these technologies.”

Pierce worked with Muhammad Kibriya, M.D., Ph.D., at the University of Chicago to develop a novel assay technology to measure telomere length. They used the new technology to complete the first Genome Wide Association Study (GWAS) of telomere length in a South Asian population, scanning entire genomes for single-nucleotide polymorphisms (SNPs), the most common type of inherited genetic variation among people.

In his GWAS, Pierce looked for associations between genes and telomere length. He located SNPs associated with telomere length, including one not previously found in populations outside south Asia. He also found that short telomeres were associated with increased risk of mortality, specifically cardiovascular-related mortality.

In 2017, Pierce received the RIVER grant, which supports scientists in their pursuit of novel directions to achieve broad scientific aims. He continues to explore how arsenic affects the genome, particularly arsenic metabolism efficiency.

Pierce recently found SNPs in another gene, FTCD, that further explain differences in arsenic metabolism efficiency among individuals. He found that HEALS participants carrying a particular variation of this gene had less metabolized arsenic in urine, meaning they are slower metabolizers of arsenic. In addition, those with this variant of FTCD were more likely to have skin lesions, an indicator of arsenic toxicity and cancer risk. By looking at groups of people with a particular SNP, Pierce can confirm whether a SNP is likely to affect risk for arsenic-related diseases.

Pierce is also exploring how the genome changes in response to arsenic exposure. He continues to to study the heritable nature of telomeres and also studies DNA methylation. Methylation causes changes in DNA expression and may play a role in making people more susceptible to aging-related diseases like cancer.

Changing the Outlook for Arsenic-Exposed Individuals 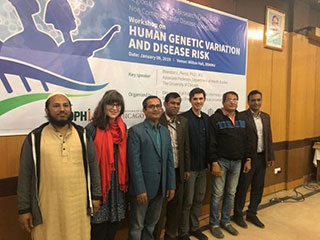 Pierce spoke at the Human Genetic Variation and Disease Risk Workshop held in Bangladesh in 2019, when initiating a study of arsenic exposure mutation signatures.
(Photo courtesy of University of Chicago, Pierce Lab)

Another part of Pierce’s RIVER grant involves working with scientists in Bangladesh to collect tumor tissues from arsenic-exposed individuals. His group will sequence tumor DNA to look for novel mutations and use nail samples from those with tumors to measure levels of arsenic exposure. The goal is to see if people exposed to arsenic have different DNA mutations in their tumors than those who were not exposed.

“If we find that tumors of arsenic-exposed individuals have a unique signature, you might be able to use that signature in the future to determine if arsenic caused a specific cancer,” said Pierce. “This information may also be useful for understanding a person’s prognosis or developing treatment strategies.”

Previous Story Understanding and Predicting the Links Between Exposure and Disease
Next Story Examining Links Between AHR, Microbiome, and Immune Functions
Back
to Top