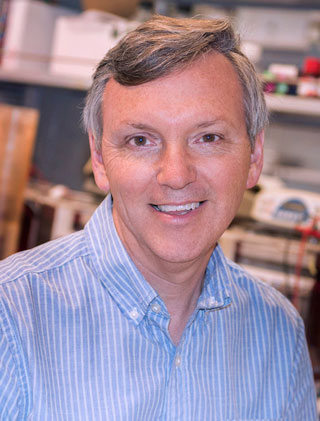 Perdew is the H. Thomas & Dorothy Willits Hallowell Chair and professor of veterinary and biomedical sciences in the College of Agricultural Sciences at Penn State University. He is also the director of the Center for Molecular Toxicology and Carcinogenesis.
(Photo courtesy of Gary Perdew)

Gary Perdew, Ph.D., studies how the aryl hydrocarbon receptor (AHR) pathway interacts with the microbiome, the immune system, and protective barriers in skin and the gut.

The AHR is a cellular protein that regulates gene expression and signaling pathways related to metabolism, immune responses, the cell cycle, and other cellular functions. AHR also plays important roles in detecting and responding to environmental contaminants, such as polyaromatic hydrocarbons (PAHs) and dioxins.

For more than 30 years, Perdew has been studying wide-ranging functions of the AHR. His team was the first to identify the protein subunit composition of the AHR. In 2017, Perdew was recognized for his integrative research and leadership in the field when he received an NIEHS Revolutionizing Innovative, Visionary Environmental Health Research (RIVER) Outstanding Investigator Award. This award funds researchers with high potential for continuing impactful environmental health research.

With support from RIVER, Perdew and his team study how the microbes that live naturally in our gut and on our skin affect our health, and how the AHR fits into the puzzle. The microbiome is the total community of microbes in the body including bacteria, fungi, and viruses. The microbiome can affect digestion, interact with the immune system, and play other roles in health and disease. Perdew studies how the AHR might play a role in these processes.

Many researchers have studied how the AHR protein binds environmental contaminants like PAHs that can lead to adverse health effects. In contrast, Perdew and his colleagues study the AHR’s capacity to sense, or detect, metabolites generated by the microbiome, providing some of the first clues that the AHR interacts with the microbiome.

Tryptophan metabolism is a biochemical process in the gut that converts the amino acid tryptophan into other compounds called metabolites. The body can use metabolites in various ways.

The gut microbiome converts tryptophan into specific types of metabolites that are different from human-generated metabolites. The AHR can bind these microbial metabolites.

Recently, Perdew’s team discovered that the human AHR exhibits a greater response to microbe-generated tryptophan metabolites than the mouse AHR.

The team then characterized a pocket in the human AHR protein that binds these metabolites and environmental contaminants using an evolutionary context. Traits or functions that are beneficial to an organism are generally preserved during evolution. Perdew asked whether binding of microbial metabolites and environmental contaminants are conserved across evolution.

To answer this question, Perdew’s team compared the amino acid sequence in the AHR ligand binding pocket among different species and across evolutionary time in primates, Neanderthals, and modern humans. Neanderthals are an extinct species of hominids that lived approximately 35,000-120,000 years ago. They discovered only the modern human AHR contains a specific amino acid in the pocket that reduces binding of PAHs to the AHR. However, that difference does not affect binding of tryptophan metabolites. Modern primates and Neanderthals, do not have this specific amino acid in the binding pocket.

Links to the Immune Response

Cytokines are proteins or peptides produced by immune cells that can lead to changes in cellular functions and influence the immune system.

Perdew also studies possible links between the AHR’s microbe-sensing ability and immune system functions. He and his team, including long-term colleague Iain A. Murray, Ph.D., discovered that the AHR regulates expression of certain cytokines, in combination with immune pathway activation through a protein called NFkB. They believe that a combination of microbe-generated metabolites, along with a bacterial component signal such as lipopolysaccharide (LPS), may enhance the immune response to harmful microbes in the gut. LPS is a cell membrane component of certain types of bacteria that can trigger human immune responses.

The researchers then searched for microbe-generated compounds that could stimulate the AHR in the gut. They screened quinoline-related compounds and discovered that 2,8-dihydroxyquinoline (2,8-DHQ) binds to and stimulates the AHR. Next, they tested immune functions and determined that 2,8-DHQ stimulates production of IL6, a cytokine involved in immune responses. However, production of IL6 was only observed in the presence of a second inflammatory signal. 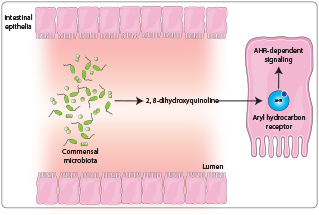 Together this information provides a mechanistic link between the AHR, gut microbiome metabolite production, and inflammatory signaling. Perdew is now studying whether potent AHR-binding compounds such as the pollutant 2,3,7,8-tetrachlorodibenzo-p-dioxin, commonly known as TCDD, leads to inappropriate increases in inflammatory signals.

“The tumor microenvironment is considered to be inflammatory, much like a wound,” said Perdew.

Perdew said the eight-year RIVER award empowers him to invest in new approaches.

“The long-term funding allows me to develop a highly interdisciplanary, interactive team,” he said. “Also, I’ve been able to invest years towards developing a new foundation using metabolomics that allows me to ask more impactful questions.”

Perdew says he pays it forward through mentorship of young scientists. One of his mentees, Troy Hubbard, Ph.D., is now a fellow at the NIEHS Division of the National Toxicology Program.

“Gary allowed me to grow as a scientist and branch out to pursue other projects and follow my own interests, even if different from the main project,” Hubbard said about Perdew. “He was very available and enjoyed discussing current results and ideas moving forward as projects evolved. And our lab was very team-oriented and collaborative, extending to other labs and institutions to expand our capabilities.”