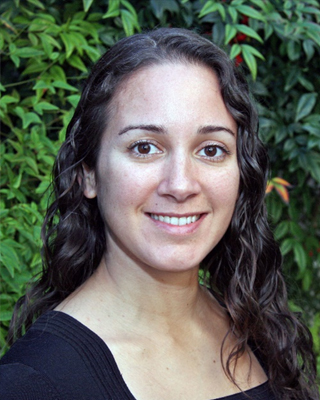 La Merrill is an associate professor in the Department of Environmental Toxicology at the University of California, Davis. She received her doctoral degree from the University of North Carolina at Chapel Hill, under the mentorship of David Threadgill, Ph.D., and Linda Birnbaum, Ph.D.
(Photo courtesy of Michele La Merrill)

NIEHS grantee Michele La Merrill, Ph.D., explores the mechanisms that reveal how chemicals alter hormone responses in the body, leading to metabolic diseases such as obesity and diabetes. A developmental toxicologist who also trained in epidemiology, her research focuses on endocrine-disrupting chemicals (EDCs), a broad group of chemicals that mimic or interfere with hormone actions in the body.

Her current research focuses on how EDCs alter how the body burns calories, called thermogenesis. Approximately 70% of the calories we take in every day are used to keep our bodies warm. Disrupting this process can lead to fewer calories burned and more calories directed toward fat deposition, which can lead to obesity and diabetes.

“My research involves making observations in humans and then integrating that data with studies in cells or rodents so we can drill down to understand those human observations,” said La Merrill. “We believe this research approach will improve disease prevention by reducing exposures and identifying useful lifestyle and pharmaceutical interventions.”

Using DDT As a Case Study

During her postdoctoral fellowship at the Mount Sinai School of Medicine, La Merrill received a Pathway to Independence Award (K99/R00) from NIEHS to investigate the link between dichlorodiphenyltrichloroethane (DDT) exposure in early life and metabolic diseases. DDT, a pesticide that was banned in the U.S. in 1972, is still found in the environment today.

“I started focusing on DDT because there is strong evidence that it disrupts fat metabolism and because it was used in the U.S. when many adults today were in the womb,” said La Merrill. “This information is really important not only to understand the developmental origins of adult diseases in the U.S., but also because DDT is still used globally to fight malaria in many parts of the world.”

La Merrill and colleagues looked at adults in the San Francisco Bay Area who had emigrated from India, the largest producer of DDT. Even though their average time in the U.S. was 20 years, they had much higher levels of DDT than the general U.S. population. These higher DDT levels were also associated with increased obesity, decreased insulin sensitivity, and increased fatty liver.

“These findings have broad public health implications for the approximately 1.8 billion South Asians throughout the world, especially those from countries still using or making harmful chemicals that are banned here,” La Merrill noted.

In another study, Californian women exposed to DDT during pregnancy in the 1960s were more likely to have daughters who were overweight or obese in their middle-aged years. Their findings in human populations were mirrored in studies in rodents where early-life DDT exposure impaired energy expenditure and metabolism in females as adults.

To better understand the underlying mechanisms involved, La Merrill and her colleagues explored how DDT alters metabolism using an approach called metabolomics. Metabolomics looks at all the all the metabolites in a sample, such as lipids and fatty acids. Their findings in rodents and pregnant women and adolescents suggest that EDCs like DDT disrupt how calories are burned. La Merrill and her team are evaluating how epigenetic modifications, which consist of the chemical changes to DNA that turn genes on or off without altering the underlying sequence, drive long-term changes in how calories are burned following exposure to EDCs. 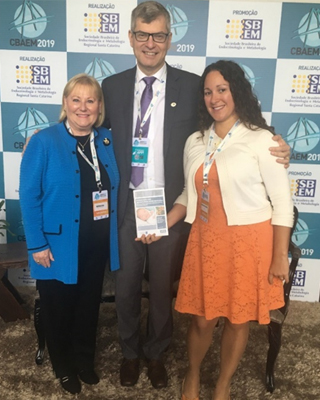 To help risk assessors better identify EDCs and summarize the potential health risks of exposure, La Merrill played a leading role on drafting a consensus on the key characteristics of EDCs as a basis for hazard identification. Key characteristics are properties of chemicals that trigger specific cellular and molecular events. The group was inspired by International Agency for Research on Cancer (IARC) efforts to use key characteristics as a way to identify carcinogens.

“We started brainstorming with scientists who developed the key characteristics of carcinogens with IARC about applying the process to endocrine disruptors and reproductive toxicants,” said La Merrill. “Instead of a narrow focus on specific pathways, it has been a useful way to organize toxicity data that considers broad mechanistic evidence.”

This approach provides a systematic method of integrating data from many different studies in a way that helps identify a specific substance as an EDC based on shared key characteristics.

La Merrill also worked with colleagues to develop the scientific content for Introduction to EDCs: A Guide for Public Interest Organizations and Policymakers. The guide aims to raise global awareness about EDCs and present a comprehensive picture of global EDC exposures and health risks.

La Merrill recently described the key characteristics approach to identify EDCs in a Superfund Research Program webinar. In her presentation, La Merrill explained how the 10 key characteristics can be used to identify, organize, and utilize mechanistic data when evaluating chemicals as EDCs that contribute to developmental vulnerability to adult disease.

In 2016, La Merrill received an Outstanding New Environmental Scientist (ONES) award from NIEHS, which supports researchers in the formative stages of their careers who conduct cutting-edge research to study how the environment influences human health. The highly competitive grant program started in 2006 and has become a model for funding emerging scientists.

“I would not be where I am today if it wasn’t for the career development opportunities that NIEHS has provided me,” said La Merrill. “From the K99/R00 that allowed me to be competitive and land an academic tenure track job at UC Davis, to the ONES award that allowed me to be productive in my research and move swiftly toward tenure, the support has been instrumental to my success.”