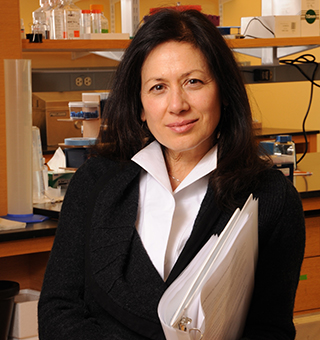 Karagas is department chair and James W. Squires Professor of Epidemiology at Dartmouth College. In addition to leading the Dartmouth Children’s Center, she is director of the Center for Molecular Epidemiology.
(Photo courtesy of Jon Gilbert Fox)

Karagas became involved in NIEHS-funded research in 1995 when a colleague, the late Karen Wetterhahn, Ph.D., invited her to join a program on toxic metals led by Dartmouth’s Superfund Research Program (SRP) Center. As part of this program, Karagas and her colleagues focused on arsenic exposure through New Hampshire drinking water and its relationship to skin and bladder cancer. This early research revealed a dose-response relationship with cancer occurrence in a U.S. population using biomarkers of arsenic exposure.

Now, about 25 years later, Karagas continues this research as the lead investigator for the Dartmouth SRP Center’s project focused on vulnerable populations, the role of co-factors including exposure mixtures, and innovative approaches to identifying early biologic responses of clinical significance. Important to Karagas, this work has provided numerous opportunities for training emerging leaders in the field of environmental epidemiology.

Initial findings from Karagas’ research led to concerns about pregnant women drinking arsenic-laden water, not only for the health of women themselves, but for their developing fetuses and children. These concerns prompted Karagas and her colleagues to launch the New Hampshire Birth Cohort Study to investigate pregnant women and their offspring during these periods of heightened susceptibility. The cohort, with more than 2,000 enrolled mother-child pairs, monitors those who use a private water supply and targets regions of New Hampshire where wells are known to contain relatively high arsenic levels.

In 2016, Karagas received funding from the Environmental Influences on Child Health Outcomes (ECHO) Program to expand efforts of the New Hampshire Birth Cohort Study. This support enables partnerships with over 80 other cohorts across the country to pool data to look at emerging exposures, rare childhood health outcomes, and other questions relevant to both urban and rural populations.

Karagas’ research also involves testing newly developed sensor technologies. She is using advanced sensors to measure indoor air pollutants, such as fine and ultrafine particles, that are generated by wood stoves commonly used by families in rural New Hampshire. She also partners with Kim Anderson, Ph.D., from Oregon State University to use silicone wristband sensors to measure a pregnant woman’s exposome, or the totality of environmental exposures. The wristband sensors are capable of capturing over 1,500 contaminants, including potential endocrine disruptors, chemicals that may mimic or interfere with the body’s hormones.

Karagas and her team are exploring whether the gut microbiome, or the collection of microbes in the digestive tract, changes the ways environmental chemicals may affect health beginning at birth. Using data and samples from the New Hampshire Birth Cohort, they are extensively studying links between the early gut microbiome and immune responses and child development. To date, they have made some groundbreaking discoveries including the finding that higher exposure to arsenic is associated with an increased risk of infant infection. They found that the composition of infants’ microbiome varied by the amounts of arsenic detected in their urine, and noticed a reduced abundance of certain microbes with higher urinary arsenic concentrations.

Other fundamental findings are that babies whose mothers received antibiotics during labor and delivery had lower microbial diversity than other infants. Antibiotic exposure specifically related to a lower abundance of the infants’ gut microbes responsible for training their immune system. These changes, in turn, could impact the infants’ future risk of immune-mediated diseases. In another study, the team found associations between maternal diet during pregnancy and variation in the types of microbes found in an infant’s gut. These effects differed depending on delivery-mode. Microbial composition was related to maternal fruit intake among vaginally delivered infants, and maternal dairy intake among surgically delivered infants.

Karagas explained that interference with the development of the infant’s microbiome may have lasting effects. Environmental exposures during this crucial period of microbial colonization could alter immunity, metabolism, neurodevelopment, and other processes throughout life. These hypotheses are currently being explored.

Karagas is committed to ensuring the knowledge generated from research is made available to policymakers. She says this is an essential step in protecting the public and affecting change in clinical and public health practice. 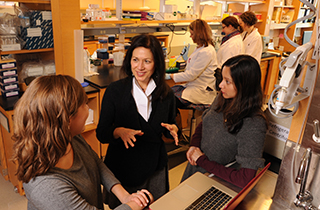 Karagas says NIEHS programs have given her the opportunity to interact with renowned investigators from other Centers across the U.S. and around the world. These programs have also enabled her to share trainees with other investigators, for example, through SRP’s KC Donnelly program.
(Photo courtesy of Jon Gilbert Fox)

Information from Karagas’ studies have informed policies and guidelines related to arsenic. For example, one of her studies reported that infants who ate rice or rice products had higher urinary arsenic levels than infants who did not eat those products. This information was incorporated into a Healthy Babies, Bright Futures report on arsenic in infant rice cereal, a guideline created by an alliance of scientists and nonprofit groups. This study has further motivated recommendations made by pediatricians and the U.S. Food and Drug Administration. Additionally, part of Karagas’ work helped guide a New Hampshire policy to reduce drinking water standards for arsenic from 10 micrograms per liter to 5 micrograms per liter.

Through the Dartmouth Children’s Center, Karagas expanded her involvement in translating research findings and communicating risks to communities. The Center’s team sought creative ways of informing the public on how to reduce their exposure to arsenic. By collaborating with the Digital Applied Learning and Innovation (DALI) Lab at Dartmouth, they produced an interactive web tool which provides easy-to-follow guidelines on ways to lower arsenic exposure, such as testing private wells and limiting common dietary exposures.

Karagas’ training and career in epidemiology allows her to integrate the latest discoveries and innovative technologies from different disciplines to study human health and disease. She applies rigorous scientific methods to put the pieces together and figure out the causes of disease. Once a cause is identified, interventions can be put in place to lessen unhealthy outcomes. Karagas says this is the one of the most gratifying aspects of her work.