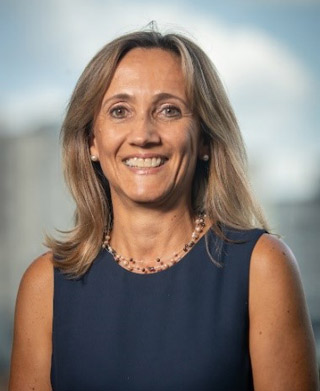 Jaspers has more than two decades of experience studying how air pollution affects the body’s ability to defend against disease and infection.
(Photo courtesy of UNC)

As a high school student, Ilona Jaspers, Ph.D., knew she was interested in discovering how chemicals modify systems in the body to affect health. Now an NIEHS grantee and Director of the Center for Environmental Medicine, Asthma, and Lung Biology at the University of North Carolina at Chapel Hill (UNC), she channels this long-held passion to better understand how air pollution alters immune responses in the lungs.

“I’m interested in figuring out how the pollutants that people inhale, from diesel exhaust and ozone to tobacco smoke and e-cigarette vapor, affect the respiratory system’s ability to defend the body against infection and disease,” she explained.

With support from NIEHS, Jaspers has made many important discoveries about how air pollution affects lung immune response and what that means for human health.

For example, in both cell and human studies, Jaspers found that exposure to diesel exhaust increased susceptibility to influenza infection. Her research also revealed that smokers have a reduced immune response to influenza infection compared to nonsmokers. These studies suggested that air pollutants increase inflammation and reduce the number and activity of immune cells in the nasal epithelium, which is the body’s first line of defense against respiratory infection. In some cases, these changes were driven by chemical compounds, called methyl groups, binding to DNA and altering the expression of genes important in mounting a healthy immune response.

Her research also revealed a promising nutritional intervention to reduce influenza risk among people exposed to high levels of air pollutants. She found that smokers who consumed broccoli sprouts had fewer signs of inflammation and lower levels of the influenza virus than smokers who did not consume the sprouts. According to Jaspers, broccoli is high in a chemical called sulforaphane which boosts the production of compounds that protect against infection and inflammation triggered by pollution.

Jaspers and colleagues have also developed a method that makes it easier to collect biological samples containing clues about immune health in the airway. The method relies on a strip of filter paper that fits into a person’s nostrils and absorbs cells and other compounds. The filter paper is stored in a test tube and analyzed later in the lab for inflammation biomarkers, viruses, proteins, and bacteria.

“Traditional methods to detect respiratory inflammation or infection require a medical professional to collect the sample and a lot of freezer space to store samples,” she explained. “Our method is accurate, can be self-administered, and stored at room temperature, which makes it easy to use in the field and remote study locations.”

“NIEHS has encouraged me to take a collaborative, team approach to science,” said Jaspers. “As a result, I’ve partnered with scientists in different fields who bring new expertise and ideas to environmental health research,” she said.

For example, Jaspers teamed up with Ned Porter, Ph.D., a lipid chemist from Vanderbilt University, to better understand how prescription drugs interact with air pollution to affect health.

“By combining my background in air pollution and lung health with his expertise in how prescription drugs interact with molecules that affect cholesterol production in the body, we are able to examine whether taking certain medications may make a person more vulnerable to the health effects of air pollution,” she said.

They found that cells exposed to both ozone and a common antidepressant had an increased inflammatory response compared to cells only exposed to ozone. Both ozone and the drug interact with cholesterol molecules in the body, leading to a process that increases inflammation. The results suggest that individuals taking these drugs may be especially susceptible to the harmful effects of ozone on lung immune health.

E-cigarette Research Gets Jaspers Out of the Lab

Recently, Jaspers expanded her research to include the health effects of exposures related to the use of e-cigarettes, or vaping.

“I’ve been researching cigarette smoke for almost 20 years, so expanding my research to include e-cigarettes was a logical next step,” she said.

With her research team, Jaspers studies how e-cigarette flavoring chemicals, many of which are safe to eat, may harm the lungs when inhaled. For example, she found that a single exposure to cinnamon-flavored e-cigarette aerosol slowed and even stopped cilia movement in lung cells. Cilia, or hair-like structures on the surface of cells, are important for clearing infections from the lungs.

Jaspers saw a need to share what she was learning in the lab about e-cigarettes and health with teens and parents.

“I realized that just doing research and publishing my results was not going to generate change and stop teenagers from potentially doing long lasting harm to their lungs,” she said.

With help from the Community Engagement Core within the NIEHS-funded Environmental Health Sciences Core Center at UNC, Jaspers stepped out of the lab to discuss the health effects of vaping and findings from her research.

“The Community Engagement Core connected me with schools for speaking engagements and taught me how to communicate effectively about science with teenagers and other community groups,” she said.

Training the Next Generation “Working with students is the best part of my job,” said Jaspers, who has mentored nearly 50 young scientists from the undergraduate to postdoctoral levels.

Since 2011, she has directed the NIEHS-funded Curriculum in Toxicology and Environmental Medicine training program at UNC which teaches pre- and postdoctoral researchers to integrate toxicology and novel research tools to advance environmental health.

“Research translation is a major component of the program. Even when trainees are studying basic biological mechanisms, we make sure they are thinking about how it connects to human health and disease,” she said.

Recently, Jaspers added science communication to the skills trainees learn. As part of the program, trainees present their research to a range of audiences, including high school and middle school students and at town halls.

In Spring 2020, Jaspers and colleagues were awarded another training grant from NIEHS through the Summer Research Experience Program. The program will prepare undergraduate students from diverse backgrounds for a career in environmental health through mentored research experiences and professional development. Jaspers partnered with North Carolina Central University, a historically black university, and the North Carolina community college system to recruit undergraduate students from diverse backgrounds into the program.

“Young scientists bring new, uninhibited ideas to the table and think about science from a fresh perspective,” she said. “I have learned so much from my trainees and don't know where I would be in my career without them.”