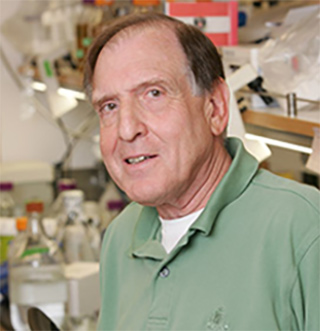 Goodman is a professor of biological sciences, molecular biology, and chemistry at the University of Southern California.
(Photo courtesy of Myron Goodman, Ph.D.)

Myron Goodman, Ph.D., studies a highly unusual DNA polymerase in E. coli bacteria called pol V that can both repair DNA and cause mutations at high frequencies. Polymerases are enzymes that build chains of polymers such as nucleic acids, the building blocks of DNA and RNA. His current research delves into the multi-faceted on and off control mechanisms of pol V during DNA damage and repair processes.

Goodman has been studying DNA damage and repair for more than 50 years. In recognition of excellence in research, Goodman was awarded an NIEHS Revolutionizing Innovative, Visionary Environmental Health Research (RIVER) Outstanding Investigator grant in 2017. This award provides sustained funding for researchers who demonstrate a broad vision and high potential for continuing impactful environmental health research. It funds the researcher, rather than their individual projects.

Pol V as a Double-edged Sword

DNA mutations can interfere with normal functions of cells and lead to health problems, including cancer and antibiotic resistance. However, DNA mutations can also be beneficial during DNA repair, immune responses, and the evolution of robust and healthy species.

When E. coli bacteria are exposed to DNA-damaging UV light, the SOS response is triggered. SOS refers to the distress signal concept. As a result, the bacteria stop dividing and focus efforts on repairing damaged DNA. When DNA damage continues after initial repair efforts, another repair process called translesion synthesis (TLS) begins. TLS copies past sites of DNA damage inaccurately leading to mutations. A key enzyme in this error-prone phase is pol V.

Pol V is an unusual polymerase because, like a double-edged sword, it can perform both DNA mutation and repair functions. Cells need rigorous controls to keep pol V working in ways that help them.

“This DNA polymerase is tightly regulated because it can do more harm than good if not used properly,” explained Goodman.

A Complex of Complexes

Building on a rich history of research going back to 1953, Goodman and his colleagues have filled in pieces of the puzzle as to how the pol V enzyme works, and many of those findings have been surprising.

Pol V was first identified by Goodman and his team in 1999 as a combination of two proteins: UmuD’ and UmuC. Goodman’s team also determined that the proteins combine into a three-subunit UmuD’2C complex to build pol V, a newly identified type of error-prone polymerase. However, pol V by itself could not copy DNA, an essential step in polymerase activity.

Using biochemistry, genetic tools, and other techniques, Goodman’s team showed that pol V is part of a multi-component complex called a pol V mutasome. This mutasome contains pol V bound to a protein called RecA and to a molecule of adenosine triphosphate (ATP), a chemical that provides energy during cellular processes. Both RecA and ATP are required for the pol V mutasome complex to be active in the DNA repair process TLS. RecA and ATP were known to have other important functions in cells, although functioning as part of a DNA polymerase was not one of them. 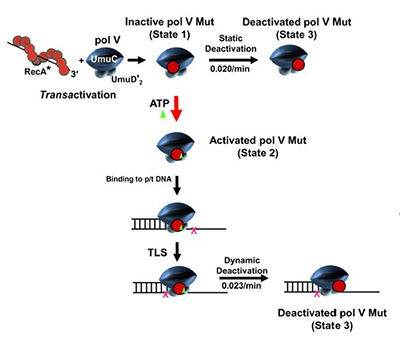 The ATP requirement for the active form of the pol V mutasome was unexpected.

“To my knowledge, it’s unique for a DNA polymerase,” Goodman said.

ATP causes a conformational change in pol V that allows it to bind to DNA. Remarkably, pol V also has enzymatic activity that can affect ATP activation, likely affecting internal control of pol V itself.

The mutasome requirement for a single RecA protein was equally surprising because RecA usually works when bound as two or more together. Goodman’s team figured out that multiple RecAs bound to a segment of single-stranded DNA create the activated form, RecA*, that provides a single RecA to pol V.

“The mutasome has a whole bunch of subunits associated with it that you wouldn’t expect to be associated with a polymerase, and these subunits are critical for the activity of the enzyme,” said Goodman. “It works like a switch that goes on and off in accordance with the cell’s needs.”

Another unusual aspect of the pol V mutasome is its multi-faceted regulation within cells. Regulation refers to how biological processes are controlled so that they turn on and off as needed, rather than too much or too little. For pol V, location-based regulation relies on holding the UmuC component in the cell membrane until it’s needed. Time-based regulation occurs when complex formation is delayed allowing other more accurate repair processes to occur first. Goodman and colleagues also identified regulation based on mutasome conformation, or three-dimensional shape. How RecA binds relative to UmuC helps determine the on and off state of the enzyme.

In a recent study, Goodman’s team further explored how conformational regulation occurs using cutting-edge, single-molecule microscopy. This tool uses fluorescent tags to visualize interactions of individual pol V mutasomes binding to DNA. They observed that the mutasomes bind to DNA only in the presence of ATP.

“Watching them bind when ATP was added is magical to see,” said Goodman.

After additional experiments, they determined that the binding of ATP triggers a shape change in the mutasome that allows the complex to bind DNA.

“The RIVER grant is currently enabling us to do cryo-electron microscopy on this protein to look at the various states of activated and deactivated forms,” said Goodman. “We can study somatic hypermutations in immunoglobulin genes in humans and hypermutations in bacteria with complete freedom. We don’t have to worry about justifying this and justifying that – we can just do it.“

Goodman started his career as an electrical engineer, and he approached Maurice Bessman, Ph.D., to learn how to measure ATP hydrolysis for his graduate engineering thesis work. Bessman noted that, as typical of what he called his gregarious and inquisitive nature, Goodman interacted with Bessman’s graduate students and showed interest in the biochemistry of spontaneous mutations. Upon graduation from the engineering program, Goodman was offered a job at Bell Labs.

“Recognizing his rare talents as a trained physicist with an interest in biological problems, I offered him a postdoctoral position, which he accepted,” Bessman recalled. “Over the years, we have maintained a strong personal relationship. And more than once he has reminded me that I owe him a good deal of money for dissuading him from taking a lucrative job at Bell Labs.”

During his career, Goodman has mentored 39 graduate students and 18 postdoctoral research associates who are now independent scientists, such as Linda Chelico, Ph.D.

“Myron lets people find their own limits,” said Chelico. “He provided a great environment with all the equipment and money and support and just let us go free. But when we had a good project going, he was on us like a hawk. Sometimes it was too much when I was in the middle of it, but in the end, I saw how much he cared to develop the project, and it helped me learn how to do this for myself over the years.”

“We would have an idea, start a project, and if the data was telling us something else, we would just stop, consider it, and start again with a new hypothesis,” she explained.

Another former trainee, Katharina Schlacher, Ph.D., said, “There are so many lessons, take-aways, morals, that I have learned from him and continue to do so. But the one phrase that I keep on coming back to most when talking to my trainees is ‘the data are the data.’ I think this simple point is often discarded to fit the dogmas of the field or other hypotheses but just so important to enable true discovery, which is finding the unexpected.”