Exploring the Role of Environmental Chemicals in Liver Disease 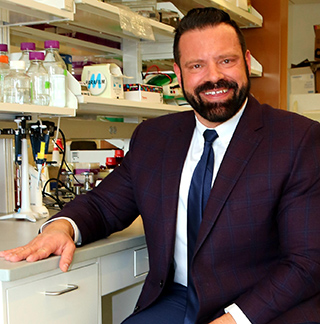 “As a physician, the RIVER grant has been instrumental in providing me with protected time for research and opportunities for new collaborations,” said Cave.
(Photo courtesy of Matt Cave, M.D.)

Matt Cave, M.D., explores how environmental chemicals and diet can interact and contribute to liver disease.

Liver disease is a major public health concern, affecting millions each year across the globe. Researchers suspect that exposure to environmental chemicals may lead to development of chronic liver diseases, but this topic is relatively understudied.

Cave, gastroenterologist and associate professor of medicine at the University of Louisville School of Medicine, works with his research team to address this knowledge gap. With funding from the NIEHS Revolutionizing Innovative, Visionary, Environmental Health Research (RIVER) Program, Cave is developing a research hub studying connections between environmental pollutants and liver diseases, like liver cancer and fatty liver disease.

According to Cave, evidence of chemical-induced liver disease can be traced back to a 1974 report of a rare liver cancer in a cluster of workers at a facility in Rubbertown, a chemical manufacturing complex in Louisville. The proposed culprit was exposure to vinyl chloride, a highly toxic and volatile organic compound.

Almost 30 years later, during his time as a clinical gastroenterology fellow, Cave stumbled upon two boxes of liver biopsy specimen slides that had been stored as part of a biorepository and medical surveillance program of these workers. Cave, his mentor Craig McClain, M.D., and colleagues analyzed liver biopsies from 25 workers exposed to vinyl chloride. They were shocked to discover that 84% of the biopsies from highly exposed workers showed evidence of fatty liver disease.

This study, published in 2010, marked the first use of the term toxicant-associated steatohepatitis (TASH), which was coined by Cave to describe liver disease induced by environmental chemicals.

“It changed the course of my career,” Cave said. “I had no intention of getting into environmental health research, but it is a great example of how curiosity can lead to important discoveries.”

“One of the main goals I hope to achieve is to increase awareness among physicians, researchers, and patients, on the potential connection between environmental exposures and chronic liver disease,” Cave said.

Notably, Cave and his team are already seeing their research inform policy. Some of their work on TASH is cited in a new clinical practice guideline on occupational liver diseases for the European Association for the Study of the Liver.

ELD-RIVER’s collaborations among academia, government agencies, industries, and professional societies offer opportunities to assess liver disease in existing cohorts. For example, one multi-agency partnership investigates the potential relationship between exposure to polychlorinated biphenyls (PCBs) and liver disease in the Anniston Community Health Survey (ACHS), a study of residents from Anniston, Alabama. Using archived samples from a subset of ACHS participants, the ELD-RIVER team showed that increased exposure to specific PCBs was associated with endocrine disruption and TASH.

“I was an early adopter of the framework,” he said. “As a physician, I want to reduce liver disease in the clinic and the population.”

Through ELD-RIVER, Cave aims to bring his research to the clinic by determining how environmental exposures contribute to or worsen patients’ liver outcomes through a precision medicine approach. Cave said collaborations with investigators at Indiana University and the NIEHS-funded HERCULES Exposome Research Center at Emory University will help make this possible, through the use of exposome tools to assess priority exposures among patients with well-characterized liver disease. 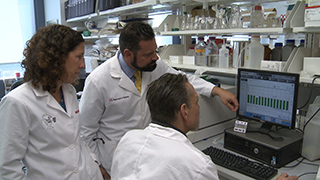 Cave (center) and colleagues, Beier (left), and Cameron Falkner, Ph.D. (right) take a closer look at data from biomarker studies in the lab.
(Photo courtesy of University of Louisville)

Cave and his team use data from existing cohorts as a screening approach to identify potential chemicals of concern. They then use animal studies to explore the underlying biological mechanisms.

Using cohort data from the National Health and Nutrition Examination Survey, the ELD-RIVER team found that exposure to polychlorinated biphenyls (PCBs), insecticides, and heavy metals was associated with suspected fatty liver disease in the general adult population. Ongoing collaborations with ACHS investigators have allowed the team to demonstrate serum cytokeratin 18 as a biomarker for TASH, and follow-up studies will allow the identification of novel biomarkers. Currently, they are exploring the feasibility of microRNAs, or small RNA molecules involved in regulating whether genes are turned on or off, as a high-throughput biomarker for TASH. Cave said a recent pilot study measuring specific microRNAs, along with pathway analysis via a special liquid liver biopsy technique, showed promise. A larger study to confirm these findings is now underway. 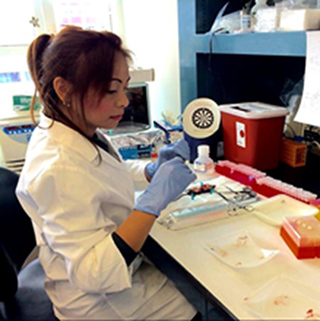 Using mouse studies, the ELD-RIVER team is exploring how mechanisms underlying diet-chemical interactions may influence liver diseases. They have published studies on the ways that certain pollutants can worsen diet-induced fatty liver disease. Important discoveries to date include PCB-induced disruption of normal protein signaling processes in the liver.

One of ELD-RIVER’s collaborators at the University of Pittsburgh, Juliane Beier, Ph.D., is investigating how novel epitranscriptomic changes, or changes in cellular RNA, can regulate liver toxicity and cancer induced by vinyl chloride. Her work is directly related to Cave’s initial discovery of TASH in Rubbertown’s chemical workers.

Training the Next Generation

Recognizing the importance of mentorship and how it shaped his own career, Cave values training the next generation of physicians and environmental health researchers. Through an NIEHS-funded summer training program, Cave provides hands-on training in environmental health research to medical students. By participating in this program, these students learn to always consider the potential role of the environment when seeing a patient. Cave also mentors a wide range of graduate and post-doctoral trainees that work in his laboratory. 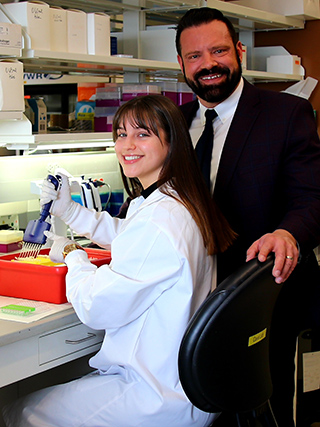 “The longer I stay in this field, the more I realize it’s the students and trainees that are most important,” Cave said. “Unless we train the next generation of investigators, there is no way we will better understand the role of environmental chemicals in liver disease.”

Cave is especially excited about mechanistic research on sex differences in TASH that is currently being performed by Banrida Wahlang, Ph.D., an NIEHS-funded postdoctoral trainee. Cave anticipates that the concepts that Wahlang is developing will one day greatly improve women’s health. In the future, new trainees such as Sydney Smith, a graduate student in biochemistry, will have the opportunity to develop animal models to investigate new chemicals and mechanisms identified by the ELD-RIVER’s ongoing studies.