Investigating Molecular Processes in Autism and Other Brain Disorders Zylka is passionate about studying brain development and exploring ways to treat debilitating neurodevelopmental disorders. He credits his success as a researcher to collaborative team science and grant support from several NIH research agencies and institutes.
(Photo courtesy of Mark Zylka, Ph.D.)

Mark Zylka, Ph.D., professor of cell biology and physiology at the University of North Carolina, Chapel Hill (UNC), uses cell cultures and mouse models to study the role of genetics and environmental factors in brain disorders.

As director of the UNC Neuroscience Center, Zylka and his colleagues are committed to advancing our understanding of brain development and function. Specifically, his lab’s research is focused on autism and Angelman syndrome, which are two neurodevelopmental disorders that affect communication and behavior. Their research could shed light on key molecular processes involved in these disorders and uncover innovative treatments.

Getting Started: The Intersection of Pain and Brain Disorders

Zylka and his colleague Ben Philpot, Ph.D., associate director of the UNC Neuroscience Center, began their careers as assistant professors around the same time. They would often get together for lunch to talk about their research. “While I was focused on studying chronic pain, he was focused on studying how neurotransmitter receptors adapt and change,” Zylka said. “But his focus later shifted to studying Angelman syndrome.”

More conversations with Philpot and the opportunity to meet families and children affected by Angelman syndrome changed the trajectory of Zylka’s research career. Zylka learned that some children with Angelman syndrome experienced altered sensitivity to temperature and pain. “We then set out to study pain response in a mouse model of Angelman syndrome,” he said. “As we moved in this new direction, it inspired me to learn more about other neurodevelopmental disorders, like autism.”

Zylka and his colleagues at UNC are now using high-throughput techniques to understand molecular pathways and risk factors that are associated with Angelman syndrome and autism. While these disorders share some symptoms, Zylka explained that understanding their distinct molecular pathways is key for his research.

“The gene ubiquitin protein ligase E3A, or UBE3A, plays a significant role in both of these disorders,” he said. “A deletion or mutation of the UBE3A gene from the mother causes Angelman syndrome, but too many copies of this gene from the mother or the father can lead to autism.”

Molecular Studies Point to Fungicides and Other Chemicals in Autism Risk

Molecular studies have led Zylka and his colleagues down exploratory paths, many of which have helped them better understand the impact of environmental chemicals on autism risk. In particular, they are focused on the UBE3A gene and enzymes called topoisomerases that play a role in DNA transcription. Transcription is the first step of gene expression, in which a segment of DNA is copied into RNA.

In individuals with neurodevelopmental disorders like autism, there is often a problem in cell-to-cell communication through a structure called the synapse. Zylka explained that genes that regulate synapse function are unusually long compared to other genes, and impairments of these genes tend to be associated with autism.

NIEHS support has been essential in helping my lab move into and establish a focus on environmental health. We are interested in continuing this research in hopes that it will have a direct impact on how the public views risks associated with different chemicals. Mark Zylka, Ph.D.

With these findings, Zylka and his colleagues wondered if there are environmental chemicals that act as topoisomerase inhibitors, or that target other molecular pathways that are associated with autism. In one study, they used a high-throughput approach to expose mouse brain cells to 300 different chemicals and measured gene expression changes using a technique called RNA sequencing.

When they compared RNA sequencing data for the exposed and unexposed brain cells, they identified six chemical groups that altered gene expression in distinct ways. One of these chemical groups showed a transcriptional profile similar to that seen in post-mortem autism brains. This chemical group included a relatively new class of fungicides known as strobilurins, such as pyraclostrobin, azoxystrobin, and trifloxystrobin. 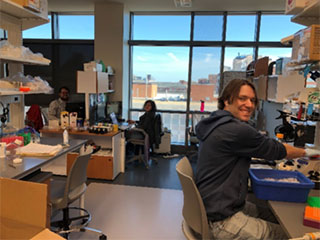 Research on these and other fungicideshave focused on the impact of very low levels on ecosystems and the environment, but Zylka says more research is needed to understand the potential impacts on human health. “Strobilurins are used in agriculture for food crops and even in the manufacture of some mold-resistant wall boards,” Zylka said. “These chemicals could have a wide range of harmful effects on the brain, especially during critical stages of early brain development and childhood.”

Corticogenesis is the process by which the cerebral cortex, the largest portion of the brain responsible for cognition, language, and other executive functions, is formed during early brain development. Genetic and environmental factors can interfere with and reprogram brain cells during corticogenesis, ultimately setting the stage for development of brain disease later in life. Understanding the timing and cellular processes associated with corticogenesis could reveal avenues for future research on autism and other brain disorders.

In a recent study, Zylka and colleagues used transcriptomics to analyze gene expression for mouse cerebral cortex cells at a single-cell level. The team was able to classify different cells that are implicated in autism and other brain disorders. Overall, these findings reveal the utility of using single-cell analysis to better understand cellular processes associated with the origin of brain disorders.

Zylka and colleagues are also applying their knowledge of processes involved in early brain development to explore innovative treatment methods. “Given what we know about neurodevelopmental disorders, the ideal time for treatment is early in development,” Zylka said.

With support from the Angelman Syndrome Foundation, they are investigating how gene editing via the CRISPR/Cas9 technology may serve as a one-time treatment for people with Angelman syndrome. This technology allows them to make the UBE3A protein functional by replacing the silenced or mutated copy of the gene from the mother with the functional gene from the father. Zylka explained that this technology has the potential for broader application in treating autism and other brain disorders.