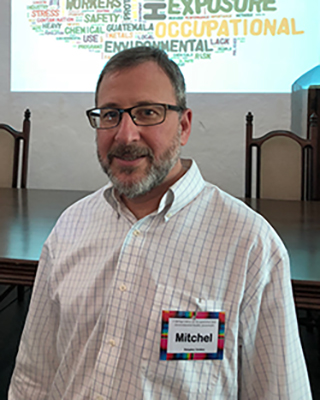 Rosen is also an associate professor at Rutgers University School of Public Health, where he studies the effect of training on workforce development, in the areas of occupational health and safety and emergency preparedness.
(Photo courtesy of Mitchel Rosen, Ph.D.)

According to Rosen, the Center’s mission is to prevent and reduce disability, morbidity, and mortality resulting from hazardous waste operations and emergency response through effective health and safety training. The Center strives to improve environmental remediation, disaster response, resiliency, and public health outcomes for workers and volunteers.

To meet the training needs of various workers and target populations, the NJ/NY Worker Training Center operates as a consortium with eight collaborating organizations. These collaborations are crucial in training workers to clean up hazardous waste sites and respond to emergencies safely and effectively.

“But it’s not just about training all of these workers,” said Rosen. “We also need to understand workers’ perceptions of risk and how training impacts them at their workplace. For example, how could training stimulate future policy changes within organizations, or impact regulations at the state and federal level?”

The NJ/NY Worker Training Center first received WTP funding in 1987, when its focus was training hazardous waste workers. Though training of hazardous waste workers continues, the Center has grown over the years to include additional focus areas. Rosen credits the Center’s rapid growth with its ability to meet training needs, and its location in relation to several chemical facilities and manmade and natural disasters.

For example, after the 1993 World Trade Center (WTC) terrorist bombing in New York City, Rosen began assessing the processes used to restrict suspicious packages. Later events, such as the WTC terrorist attack in 2001 and Hurricane Sandy in 2012, also acted as catalysts, pushing the Center to emphasize disaster preparedness for workers.

Today, the Center is funded by multiple program areas nested within the WTP, including the Hazardous Waste Worker Training Program (HWWTP), Environmental Career Worker Training Program (ECWTP) and the HAZMAT Disaster Preparedness Training Program (HDPTP). The Center’s ECWTP, also referred to as BuildingWorks Pre-Apprenticeship, is an especially successful program that delivers training to disadvantaged and underrepresented workers for jobs in construction trades. To do this, the NJ/NY Worker Training Center partners with the New York District Council of Carpenters Training Center. Individuals are recruited and selected to complete the 10-week program that includes technical classroom instruction in four categories: career guidance, introduction to union apprenticeship, health and safety, and environmental worker training. Every year, there are three training cycles, each enrolling 20 individuals at a time.

Graduates are followed for five years to track their progress. Reports on the program suggest that carpenters who have completed this program have kept their jobs at rates double that of those entering carpentry through other routes.

“The outcomes of this program have been great in terms of job creation and establishment of career paths for these individuals,” said Rosen.

Overall, program graduates have said the program not only teaches the technical skills needed to be successful in the construction industry, but it also instills the habits and mindset needed to achieve success.

Partnering with Puerto Rico to Focus on Resiliency

One of the Center’s participating members is the Universidad Ana G. Mendez, or UAGM, in Puerto Rico. Although the formation of a partnership with an island almost two thousand miles away seems unlikely, Rosen says the collaboration has been extremely successful. 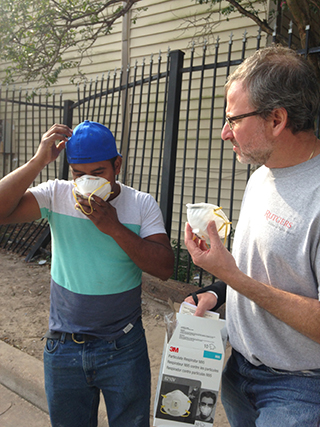 “There’s a lot of things I love about teaching in this field,” said Rosen. “In class, learners often see how the issues we are discussing might impact them at work or in their personal life. This can help them stay safe and healthy.”
(Photo courtesy of Mitchel Rosen, Ph.D.)

Twenty years ago, Rosen met Javier Saracho, Director of the Institute for Environmental Education at UAGM, during a meeting with members of NIEHS, the Occupational Safety and Health Administration, and the National Institute for Occupational Safety and Health. After extensive discussions over the phone, Rosen welcomed Saracho and UAGM to be part of the NJ/NY Worker Training Center. Through the partnership, Puerto Rican locals and organizations have received HAZMAT and disaster preparedness training. Rafael Caballero, the current director at UAGM, continues to be a great collaborator.

“Having a partner in Puerto Rico that knows the local agencies and organizations and has capacity to deliver training across the island, is something that is really important,” said Rosen.

This statement has held true, especially after Hurricane Maria hit in 2017, devastating thousands of people on the island. Rosen worked with UAGM, the World Cares Center, and other organizations to provide training in mucking and gutting, mold suppression, and use of personal protective equipment to survivors, students, and leaders. The NJ/NY Worker Training Center also partners with UAGM to provide training in a relatively new area called resiliency. As opposed to ensuring the physical health of a community, resiliency focuses on mental health. These courses provide workers with tools and skills to identify symptoms of stress, find support, and learn coping strategies when dealing with disasters and other stressful situations.

“Until recently, mental health has taken a backseat to workers’ physical health,” said Rosen. “By focusing on resiliency training, workers receive the tools to help identify and deal with the mental health effects stemming from their work.”

An integral part of the Center’s success comes from connections with members of the greater WTP family. Rosen describes the WTP family as one with overlapping areas of interest, making it possible for different centers, universities, and organizations to form relationships with one another.

In 2015, Rosen partnered with WTP grantees at the Midwest Consortium for Hazardous Waste Worker Training, The New England Consortium, and the Western Region Universities Consortium to examine managers’ perceptions of training courses delivered to employees. During the study, surveys were distributed to managers, asking questions about motivations for sending employees to HAZMAT training and the observed impact of training in the workplace. Through the surveys, managers attributed positive impacts to training, such as improved health and safety procedures in the workplace. These findings are consistent with existing evaluation research that shows how training reduces workplace illnesses, injuries, and fatalities.

Now, the team plans to evaluate the long-term impact of HAZWOPER training courses. One part of this work will analyze the 30-year impact of the NJ/NY Training Center. “These types of collaborations often start at WTP workshops and meetings,” said Rosen. “Sometimes the best outcomes of those meetings aren’t the things said in the meeting, but the discussions they facilitate between grantees, which in turn lead to new partnerships.”