Investigating the Role of Environmental Sensing Proteins in Human Health 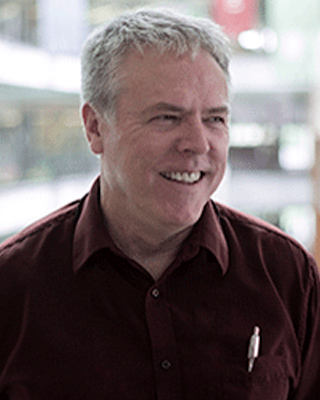 NIEHS grantee Christopher Bradfield, Ph.D., professor of oncology in the McArdle Laboratory for Cancer Research at the University of Wisconsin-Madison, has built a research program funded by NIEHS for over 20 years. Bradfield and his research team have made groundbreaking discoveries about PAS proteins, a special class of proteins that act as environmental sensors for light, oxygen, and foreign substances in a variety of species.

In response to certain environmental exposures, PAS proteins and their signaling pathways can alter important molecular processes that are associated with cancer, diabetes, and other human diseases. With grant support from the prestigious NIEHS Revolutionizing Innovative, Visionary, Environmental Health Research Program, Bradfield and his team will investigate PAS proteins as environmental sensors and how they play a role in human health. Their research shows promise in identifying therapeutic and intervention strategies to reduce the risk and consequence of a variety of important human diseases.

Understanding the Functional Role of AHR

One PAS protein of special interest to Bradfield’s research team is the aryl hydrocarbon receptor (AHR). Notably, Bradfield and his colleagues were the first to purify and characterize the AHR protein and provide a model of its signaling pathway. Their studies have shed light on the role that AHR plays in the development and physiology of specific tissues.

The term PAS is derived from the first letter for each of the three founding members of the protein family – PER, ARNT, and SIM.

Bradfield’s team was the first to discover the superfamily of related PAS proteins. To date, they have characterized more than a dozen novel PAS proteins, described their pairing rules, and provided initial insights into their roles in human health.

They also identified the role that AHR plays in vital organ growth and development. For example, results from one study showed that mice lacking AHR had severe liver defects, suggesting the critical role it plays in normal liver growth and development. Other mouse studies revealed that the joining of AHR with its partner, the aryl hydrocarbon receptor nuclear translocator (ARNT), is essential for normal development of blood vessels, including those that facilitate blood flow during fetal and early development.

By investigating AHR and its signaling pathway, Bradfield’s team has uncovered the role of novel PAS proteins in human circadian rhythms, which act as biological clocks to control bodily functions such as hormone production, metabolism, and sleep patterns.

Discovering the Role of Novel Pas Proteins in Circadian Rhythms

“We have found when you disrupt circadian rhythms in different mouse or cell models, it can lead to a variety of diseases that are relevant to humans, such as diabetes, cancer, and infertility,” said Bradfield. This is especially important when considering the health of vulnerable populations like shift workers, whose circadian rhythms are often disrupted by their exposure to light at night.

Using a mutant mouse model, his team discovered that a novel PAS protein called BMAL1 is essential for normal circadian rhythms in mammals. In subsequent studies, Bradfield’s team showed that mice lacking BMAL1 in specific cells exhibited obesity, reproductive issues, and skeletomuscular defects. Bradfield said they were surprised by these findings, especially since the mice lacking BMAL1 showed no early developmental defects. Instead, the adverse outcomes showed up later in life.

Bradfield strongly believes that better understanding of BMAL1’s functional role, as well as other PAS proteins, can be used to inform potential disease interventions.

“Overall, PAS proteins will serve as incredibly important targets for drug therapy in the years to come,” Bradfield said.

One emerging field of interest to the team is chronotoxicology or circadian medicine, which explores how the toxicity of drugs is influenced by the circadian rhythm through variation in metabolism over a 24-hour period. For example, the drug acetaminophen is regarded as safe at recommended doses, but higher doses can lead to liver toxicity. Previous research suggests that this toxicity is related to metabolic changes that occur when people eat. In one study, Bradfield’s team found that deleting BMAL1 in liver cells dramatically reduced the bioactivation and toxicity of acetaminophen. These findings suggest that the biological clock in liver cells is key for bioactivation of acetaminophen and could help inform better guidelines for drug administration.

The research team is also exploring the relationship between AHR signaling and natural anti-carcinogens, such as indole-3-carbinol, which is found in cruciferous vegetables like broccoli and kale. “We showed many years ago that when indole-3-carbinol is ingested, the gut turns it into molecules that are good activators of the AHR,” Bradfield said.

Bradfield mentioned that closer investigation of AHR signaling, specifically in the gut microbiome, could help identify drug therapies for individuals suffering from intestinal disorders, such as Crohn’s disease and inflammatory bowel disease.

Bradfield acknowledged that mentorship has played an important role in his career. Now, he is paying it forward by mentoring early career toxicologists in his own lab.

“Chris treated me as a colleague, always willing to give me his time or thoughts and encouraged me to think big. This was invaluable to my career, and I’ve sought to emulate his style with my people”, said John Hogenesch, Ph.D., one of Bradfield’s previous students who is now a professor of pediatrics at Cincinnati Children's Hospital Medical Center.

When asked about the qualities of a good mentor, Bradfield said you must be patient and willing to allow people to fail a few times, even if it is at a relatively high cost. “Most of my mentees have been really successful, but this success hasn’t come without failing somewhere along the way,” he said. “It’s just part of the game.”

Previous Story Modeling the Past, Present, and Future to Explain and Predict Health Outcomes
Next Story Sharing Research Results to Empower Individuals and Communities
Back
to Top